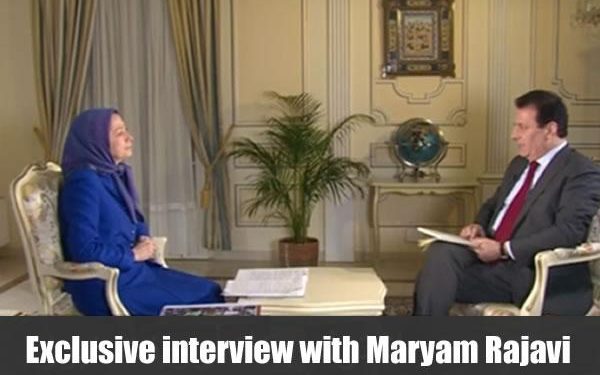 Maryam Rajavi, the President-elect of the Iranian Resistance, in an interview with the Syrian opposition’s Orient News television aired on Friday, said Iran’s regime continues to back Bashar al-Assad’s dictatorship in Syria and export tensions and sectarian-motivated conflicts in the region.

The Iranian regime, according to Mrs. Rajavi, used a three-facet strategy to survive: acquiring nuclear weapons, repressing its own citizens and aggression and meddling in neighboring countries.

Mrs. Rajavi told Orient News TV that the nuclear deal shook the Iranian regime and caused a big blow to the position of its supreme leader Ali Khamenei, adding that after sanctions were lifted, the mullahs plan to use the released funds to provoke more conflicts while the Iranian people are still suffering economic hardships.

Mrs. Rajavi stressed that the Iranian regime’s policies have never changed because it is trying to make up for its defeat through instigating disputes and fueling wars outside Iran.

Mrs. Rajavi said that there are 60,000 fighters that belong to the Iranian regime’s Islamic Revolutionary Guards Corps (IRGC) and its foreign militias fighting alongside the Assad regime. Mrs. Rajavi said there would be no change in the Iranian regime’s strategy following the elections last February, reiterating that Rouhani stated that Iran’s regime has dedicated large funds to purchase new weapons, which proves that it still has an aggressive policy towards neighboring countries.

When asked whether the Iranian regime has any worries about being affected by the same fire of sectarian conflicts it is trying to spread in Syria, Lebanon, Yemen and other neighboring countries, Mrs. Rajavi said the Iranian people who belong to different ethnicities and religions have experienced the oppression of the regime, adding that the majority of the Iranian people are united against this regime and support the Iranian Resistance.

On the occasion of the 5th anniversary of the Syrian revolution, Mrs. Rajavi greeted on behalf of the free Iranian people the “heroic Syrian people” who have fought bravely against the Assad regime which is backed by Iranian regime militias. Mrs. Rajavi said that the struggle of the Syrian people represents today the conscience of the world, adding that Iran’s picture was distorted by a minority which is controlling the Iranian people.

Mrs. Rajavi pointed out that ordinary Iranians view the death of the Iranian regime’s soldiers and military leaders in Syria just like the way Syrians themselves see it, and that the same leaders fighting the Syrian people were involved in bloodshed in Iran while oppressing the uprising of the Iranian people.

Mrs. Rajavi emphasized in the interview that any success of the Iranian Resistance will be reflected on the Syrian cause. She said that the Iranian regime is the enemy of all Iranian and Syrian people.

Mrs. Rajavi clarified that the real reason behind the hostility of the Iranian regime is its need to stay in power by exporting violence and sectarian ideology and promoting terrorism to hide its illegitimacy because most of the Iranian people refuse this medieval mentality that is controlling the country. She said that the group of fanatic mullahs uses religion and its stooges to commit massacres and repress freedoms. It is a theocratic regime that has nothing to do with Islam in reality, Mrs. Rajavi said.

On Russian-Iranian relations, Mrs. Rajavi commented that there is serious tension between the Iranian regime and Russia. The mullahs’ regime wants to fight in Syria till the last Iranian soldier to keep Assad in power, stressing that this will not happen because Assad will be defeated and Khamenei will do just as Khomeini did when he was forced to withdraw from Iraq and accept to drink the chalice of poison.

Iran, Suppression: The Victims of Iran’s Cultural Crackdowns Will Be the Agents of Change