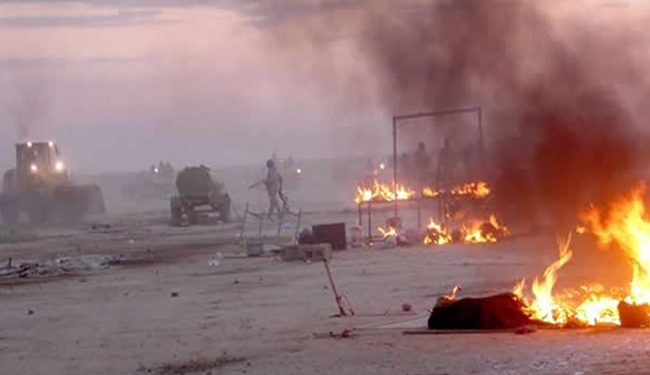 During the days leading to 8 April 2011, several battalions of the Iraqi army and dozens of armored personnel carriers, Humvees, bulldozers and other engineering vehicles had been deployed around Camp Ashraf’s perimeter fence. The Iraqi government had claimed that the issue is merely replacement of forces. However, it seemed the new force was in fact reinforcing the existing battalion which remained in place. All indications pointed to an imminent attack.
The US Embassy was fully aware of the situation; further attack against Ashraf was in prospect and there was only a matter of when. Thus, the USF-I had allocated a small contingent force based in FOB Warhorse, to move to Ashraf on daily monitoring missions.
However, oddly, in the evening of 7 April 2011, the USF-I force suddenly left the camp. At 04.45 a.m. of the following morning, 8th April, the attack commenced. 2,500 heavily armed troops and over 140 armored vehicles invaded Ashraf and opened fire on the 3,400 residents.
An attempt by the UN leadership in Iraq at 9 a.m. to convince Faleh al-
Fayadh, the NSA, failed. He said to the UN Deputy Special Representative of the Secretary General in Iraq who was insisting to stop the attack that nothing was happening in Ashraf and the UN had merely been alarmed by false rumors.
By the end of the day, the picture became clearer. Under the command of General Ali Gheidan , commander of Iraqi ground forces, the three Iraqi battalions moved into Ashraf as dawn broke. They used teargas and smoke and stun grenades. The soldiers opened fire and snipers were deployed to shoot dead any residents who were trying to film the attack by their cameras. Humvees and armored personnel vehicles were driven at high speed into crowds of residents, crushing them under the wheels. By evening, 34 residents, among them eight women, were either gunned down or crushed by military vehicles. Over 300 residents of the camp had been seriously injured and the Iraqi authorities were preventing them from accessing proper medical attention. Two other residents died later due to severe injuries.

Gheidan was commander of the ground forces and was later responsible for crushing the Sunnis’ peaceful rallies. During the ISIS attack on Mosul, he disgracefully ran away and was later dismissed for his cowardice.