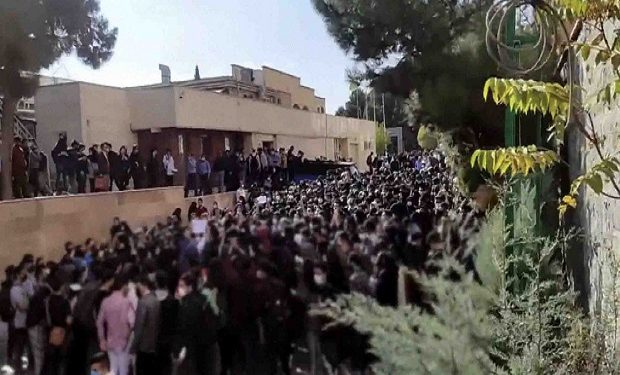 The new generation of Iranians is seeking democracy and separation of religion and state.

One of my colleagues rushed up to me last week and while struggling to catch her breath, she cried, “Roshanak, Roshanak, the security forces just picked up a few of your students.” I did not know what to do. It was as though my heart had stopped beating.

Days have passed and I still have no idea what has happened to those students, who are all studying law, one of whom is among the most promising in the country. Every night I go to sleep anxious about where they are—in solitary confinement? Under torture? What are their families going through?

As a woman and a university professor in Iran, I really do not know what my future holds as I am writing this letter. The current Iranian regime feels genuinely threatened by the very people it rules. This is a government under which education in universities has been tainted by dictates of forced loyalty to the leadership and schoolchildren are mandated to look up to the supreme leader as their commander and role model. But many people are no longer listening to those dictates.

Let me tell you about the events of these eight weeks. People are full of excitement and enthusiasm. The new generation of Iranian teenagers out in the streets is full of hope. Through the power of resistance, they have discovered themselves and a path to fulfilling their dreams. These young Iranians are unwilling to go back to living in fear.

Everything started after the killing of Mahsa Amini on September 16. Her murder outraged many across Iran, especially young women and their families, and set off a wave of protests across the country, with participants going beyond the single-issue grievances or economic concerns that fueled previous protests to instead take aim at the dictatorial rule of Ali Khamenei—officially known as the Supreme Leader of the Islamic Republic of Iran—and his regime.

The protests reflect decades-long fury over the denial of basic freedoms. In 1925, Reza Khan, a military officer, forced his way into power in Iran with British backing and crowned himself Reza Shah Pahlavi. He suppressed Iran’s burgeoning constitutional movement, which had aimed to transform Iran into a democratic society. Reza Shah’s dictatorial rule included a heavy-handed hijab ban, in 1936. This compulsory dress code was widely opposed by women who sought the freedom to choose and instilled a sense of disenfranchisement that continued until the monarchy’s demise under his equally despotic son, Mohammad Reza. Women were not the only victims of the Pahlavi dynasty, which also clamped down on Iran’s ethnic groups, such as the Kurds, Baluchis, Lors, and Arabs.

Then, in 1979, Ruhollah Khomeini usurped the anti-monarchic revolution for freedom that had deposed the Shah and promptly subverted and transformed it into yet another despotism, this time under the rubric of the Islamic religion. This time, Khomeini and his regime subjugated women with mandatory veiling. Like his two predecessors, who wore the cloak and crown instead of the robe and turban, Khomeini also suppressed Iran’s ethnic minorities.

Both the Pahlavi Shah and the religious dictatorship aimed to enslave women’s bodies and minds by alternately banning or imposing hijab. Either way, compulsory dress codes are a ploy to control, subjugate, and relegate women to an insignificant and second-class role in society, as a commodity or a slave. What Iranian women want is freedom to choose and to exercise their right over their destiny.

In 1979, many women in Tehran protested Khomeini’s betrayal of ideals for which the revolution was fought, particularly freedom, just as many had protested Reza Shah’s forced ban on hijab. Both were undemocratic, violated free choice, and were oppressive by all standards.

I wear a headscarf, but every woman should be allowed to make a fully informed and personal choice in this matter. Our religion, misrepresented by the regime, says there should be no compulsion in the expression of religion. This revolution is about freedom of choice. The regime’s complicity in the killing of people in neighboring countries, fanning sectarianism, fomenting conflict, and, most recently, providing drones and weapons that kill the Ukrainian people, are other examples of how it has misled the world with its ruinous rule. I have joined a network of resistance units in the universities affiliated with the MEK (People’s Mojahedin Organization of Iran). We want a democratic republic that is enlightened, as well as the separation of religion from state. Most important of all, the resistance units are not going to let up until this regime is gone and freedom and democracy are achieved. People support our resistance units in the streets because we express their hopes and their grievances, and they know the only way forward is through fundamental change.

The people enthusiastically join the gatherings we stage, and call for the regime’s downfall. A sense of unity and caring is evident when houses in the area leave their doors open for us to take refuge when security forces attack our protests. Just a couple of weeks ago, we took a woman who was injured by birdshot fired by security forces to a nearby house. The couple residing in the home took her in like their own daughter and cared for her. They called a friend who is a nurse, who came and tended to the woman’s injuries. We are blessed with a unity of purpose and mutual trust that had been robbed from us for too long by this regime.

Women, men, and youth of Iran are demanding the overthrow of the established system because it is against all forms of individual and social freedoms. For two months now, protesters have been out in the streets every day, defying brutal security forces and wearing them down. Protests have spread to over 220 urban areas, in all of Iran’s 31 provinces—and are spreading too far and wide for the regime to contain. The state cannot handle a situation in which schoolkids—even some of their own children—are shouting “Death to Khamenei!” and “Death to the dictator!” How will they suppress that? Our problem with this regime is not veiling: We are fed up with their rules, their injustices, and their obstacles to progress.

I go out almost every night to protest now. The slogans tell it all: “Death to Khamenei!” and “Death to the oppressor, be it the Shah or the Leader!” and “Freedom, Freedom, Freedom!” The Iranian people have mentally liberated themselves from this regime and are now engaged in a revolution to throw off the yoke of religious dictatorship, just as they did with the monarchy. The people are leaving the monarchy and any kind of tyranny behind. What is important is that our nation has awoken from a 43-year-old nightmare and is finally reclaiming its rights.

When I talk to my students and go out in the streets, I can sense the organizing force of our slogans and our goal. When I hear another flash protest with our slogans, I realize that they resonate with the people and that our goal of bringing this regime down and building a better future is near. Protesters and people at work and in our neighborhoods all say this time is different. We have started to realize the power of an organized movement, and mutual trust is built as we protest for freedom and risk arrest and beatings.

Today, Iran has set foot on a bright path full of hope for a vibrant future for its youth, who are determined to overcome the spell of this regime and prevail.

We need the world to stand with us in the democratic revolution our nation is engaged in, and to help me see my students free and safe again. ❖

Roshanak Darabi is the alias of a university professor in Tehran.