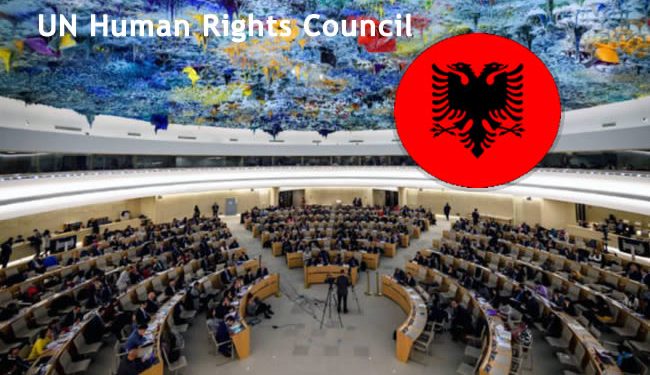 Albania is deeply concerned about human rights abuses in Iran

On 17 March 2022, during the 49th session of the UN Human Rights Council, the Permanent Mission of republic of Albania in Geneva made an intervention on the situation of human rights in Iran. Text of the speech by the representative of Albania is as follows:

Albania welcomes the report of the Special Rapporteur on the human rights situation in Iran and shares the concerns of the report on the human rights violations characterized by violence, intimidation, detention, torture, and systematic murder against all those who dare to oppose the regime, or simply for exercising their right to freedom of opinion, expression, association, and peaceful assembly.

{We call for impartial and transparent investigations for all human rights violations and regret that no investigation has been carried out on the excessive and lethal use of security forces during the November 2019 protests. One of the most egregious examples in the context of peaceful protests during 2021 was the use of lethal force against participants in a series of protests that erupted in mid-July 2021 in over 20 cities in Khuzestan Province}

women and girls in the public and private spheres, in particular on early and forced marriages and endemic unemployment, requiring profound reforms of the legislation relating to the status and rights of women, in Iran.

We join the Special Rapporteur in his regret that has been no development in the adoption of the bill on preserving the dignity of women and protecting them against violence. The persistence of discrimination against ethnic, religious and sexual minorities continues to remain very worrying.

Albania remains deeply concerned about the high rate of executions, including children, in violation of international law. We call for a moratorium on executions as a first step to formally abolish the death penalty and a ban on the execution for child offenders in all circumstances.

{In addition, the report describes a deplorable situation regarding the conditions of detention in Iran, also aggravated by the Covid-19 pandemic. The arbitrary detention of dual and foreign nationals as a means to put pressure on foreign Governments remains of deep concern. Many of those arbitrarily detained have serious underlying medical conditions that have been left untreated, or health conditions that have significantly deteriorated}.

Iranian British Prisoner released: justice in Iran does not have any meaning

From Kyiv to Tehran, Resistance Has Won a Free Future