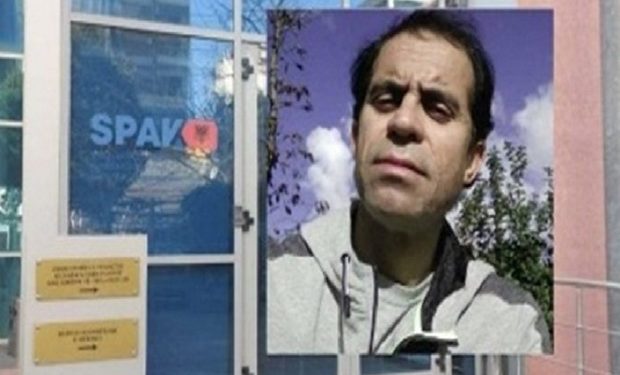 Albanian Court Ruled 10 Years in Prison for an MOIS Agent

who had tried to prepare a machine gun to assassinate Mr. Mehdi Abrishamchi, head of NCRI Peace Committee

According to Albanian Top Channel TV, on December 14, 2022, the Special Court to Combat Organized Crime of Albania issued a final sentence of 10 years in prison for the MOIS agent Bijan Pooladrag.

The NCRI Security and Counterterrorism Committee published the charges and summary of the case of this agent and his missions in relation to the Ministry of Intelligence (MOIS) and the terrorist Quds Force in its statements on October 11, 2020, April 2, 2022, and July 18, 2022. In this regard, Balkan Web wrote on July 16, 2022, about the arrest, search and investigation of 11 MOIS agents before the Iranian Resistance’s annual gathering:
“The anti-corruption and organized crime structure (SPAK) has been conducting investigations for four years about a cell that intended to attack the MEK in Albania. SPAK attacked a terrorist cell in 2019. News 24 TV has disclosed a complete investigation file, which shows that the terrorist cell will most likely target Mehdi Abrishamchi. The members of this cell monitored the MEK members in Albania. The arrests and investigations inform about an espionage and terrorist cell in connection with the arrest of another regime’s agent named Bijan Pooladrag two years ago… They are suspected of being members of an espionage group, where Bijan Pooladrag, a former member of the MEK, had been arrested before… He is accused by SPAK of being part of a terrorist cell that planned to attack the senior officials of the Iranian opposition who live in Ashraf 3. He was tasked with taking photos of the MEK’s members and preparing a documentary about places they refer to… he was receiving orders and instructions through the Telegram application, and according to the investigation, he was planning the assassination of one of the MEK senior members. Referring to the investigation file, it seems that one of Iran’s MOIS officers had ordered the defendant to procure a Kalashnikov gun in black market and find trained people who can commit murder.”

Also, Albanian News 24 TV announced on July 16, 2022, that it has a complete investigation file, according to which “Aram” (pseudonym of Alireza Naqashzadeh, a regime’s agent residing in Austria) and his team, were concentrated on obtaining information about the physical locations of the MEK, especially Maryam Rajavi, Seddiqeh Hosseini, Javad Khorasan and Hassan Nayeb Agha. Spying and wiretapping of telephone and computer communications of the MEK and falsifying news and defamation to demonize the MEK are among the crimes committed by Bijan Pooladrag.

Microsoft’s investigative report on September 8, 2022 regarding the cyber-attack on service and government websites in Albania revealed how an association of the Iranian regime’s MOIS (called ASILA) and its members, including a number of local agents named Olsi Jazexhi, Gjergji Thanasi, Dashamir Mersuli, and Vladimir Veis, in the service of the Iranian regime, were aligned with the propaganda of the Iranian regime’s hackers in order to intensify the effects of the strike on Albania.
The final opinion of the panel of judges about Bijan Pooladrag reads, “Criminal proceedings against him began in 2019, while SPAK sent the file to the court, raising several charges of criminal acts such as: “Acts with Terrorist Purposes”, “Terrorist Organisation”, “Participation in combat actions in a foreign state” and “Organization for participation in combat actions in a foreign state”. Pooladrag was charged by SPAK as part of a terrorist cell intended to attack senior Iranian opposition officials, living in Ashraf 3.”
According to the court statement on December 14, 2022, Bijan Pooladrag was finally sentenced to 10 years in prison.

Iran Uprising Supported by a Group of Bi-partisan U.S Senators