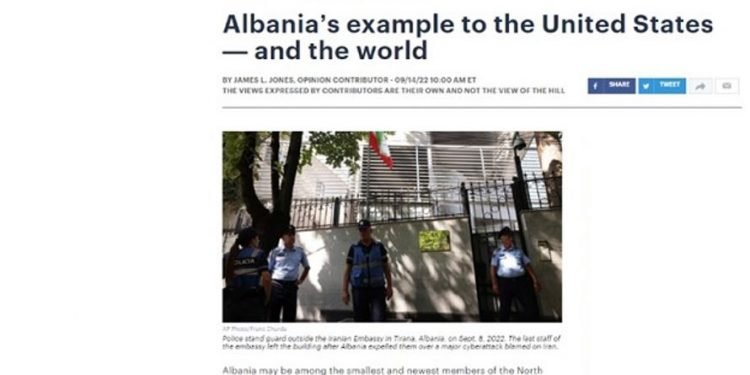 Albania’s example to the United States — and the world

Police stand guard outside the Iranian Embassy in Tirana, Albania, on Sept. 8, 2022. The last staff of the embassy left the building after Albania expelled them over a major cyberattack blamed on Iran.
Albania may be among the smallest and newest members of the North Atlantic Treaty Organization (NATO). However, its government’s recent decision to sever diplomatic relations with the Iranian government over a massive cyberattack on Tirana this summer stands tall indeed. Albania has accused Iran of a second cyberattack, targeting its national police, discovered on Sept. 9.

Neither the lessons from Iran’s actions nor Albania’s courageous response should be lost on the United States and the global community. Both must weigh instructively into efforts aimed at reviving an international agreement for Iran to end its nuclear weapons program and deal responsibly with the Iranian regime’s consistent threats to regional and global stability.

Among its other nefarious objectives, Iran’s cruel attack on Albania’s e-government platforms in July sought to destroy critical infrastructure on which the Albanian people depend for vital public services. Why such an assault on innocent Albanians? Because six years ago Tirana demonstrated humanitarian compassion and moral courage in granting refuge to Iranian exiles long targeted for extinction by Tehran for their desire for a democratic Iran. The regime found intolerable to the point of violence the group’s vision for a new Iran—one devoted to respect for human rights, living peacefully and progressively among the family of nations.

Over 100 of the dissidents, many of them women and children, had been murdered at their longtime encampment in Iraq in a series of attacks by forces under Tehran’s control. The nearly 2,500 survivors were desperately seeking safe harbor when Albania opened its arms to accept them in peace. Though Iran launched subsequent plots against the dissidents while on Albanian soil, the efforts were foiled by Albanian security services. Not to be deterred, Tehran turned to cyberattacks against Albania itself on July 15.

When the country was first hit, the sponsors of the cyberattack were unknown. In the aftermath, U.S. and United Kingdom cybersecurity experts worked with the Albanian government to investigate the source and help a fellow NATO ally recover from the intrusion. The United States imposed sanctions on Iran for the attack. The collaboration exemplified the allied cooperation increasingly necessary to prevent, respond to, and recover from hacks on the critical infrastructure of democracies.

Once Iranian responsibility was firmly established, Prime Minister Edi Rama rejected Iran’s well-practiced efforts to deny and deflect responsibility. Understanding that evil must be confronted, Rama took decisive action to sever relations with the mullahs’ government and expel Iran’s diplomats from Albania. This bold action could not have been an easy decision for a peace-loving nation. But it was a historically momentous one. His response sent an important and timely message to the Iranian regime that its brutalities will not be tolerated. Moreover, it is an example for other countries in the region — and around the world — threatened by Iranian hacking. Above all, it demonstrated to the global community the resolve needed in dealing with Iran’s rulers and its litany of international outrages.

Before and since its cyberattacks on Tirana, the mullahs’ regime has continued to show its true colors in opposition to international norms and global order. It ships drones to help Russia prosecute its illegal war on Ukraine. It maintains its sponsorship of international terrorist organizations that kill and maim innocents. It attacks ships operating in international waters. And, most menacingly of all, it continues seeking to obtain a nuclear capability to threaten and extort the Middle East and the world, while providing lip-service for reviving a nuclear deal.

Among the world’s most consistent threats to global peace and stability, the regime has made an art of dodging its international commitments, strategically generating global friction to exert greater domestic control over its citizens. It regards United Nations Security Council resolutions and international law as impediments to be ignored. In Tehran’s estimation, human rights, international norms, and modernity are threats to be snuffed out. The Iranian leadership remains the chief antagonist of democracy and liberalization across the Middle East, where a better future for millions of people struggles to emerge. This includes its rejection of Israel’s right to exist, including by opposing and actively undermining the Middle East peace process. The reality is that Iran’s rulers will continue to operate according to a single objective — to maintain power and control over the people of Iran and extend its dominion across the region, no matter the human cost.

Why the Federal Reserve won’t be able to control inflation this time
King Charles and an Irish revolutionary: A reminder of how politics can change
This pattern of behavior, including the attacks on Albania, speaks volumes about Tehran’s sincerity to be a responsible member of the global community, including ending its nuclear weapons program. The regime’s lame denials about the July hack reflects directly on its trustworthiness needed to underpin any effective nuclear control agreement. For its part, Albania has demonstrated to larger and older democracies, including our own, the kind of moral clarity, courage and resolve required to stand up against Iran’s outlaw behavior in its many forms.

The international community’s approach must be inspired by the harsh reality that if Iran’s behavior is tolerated unanswered, it will not only persist but grow bolder and more dangerous for us all. Such lessons the free world ignores at its own peril.

Gen. (Ret.) James L. Jones, a former commandant of the Marine Corps, former supreme allied commander of Europe and former national security adviser to the president, is executive chairman emeritus of the Atlantic Council. He is president and founder of Jones Group International, which provides cybersecurity advisory services to protect critical infrastructure globally, including in the Balkans.

Iran is rocked with protests after heinous murder of Mahsa Amini