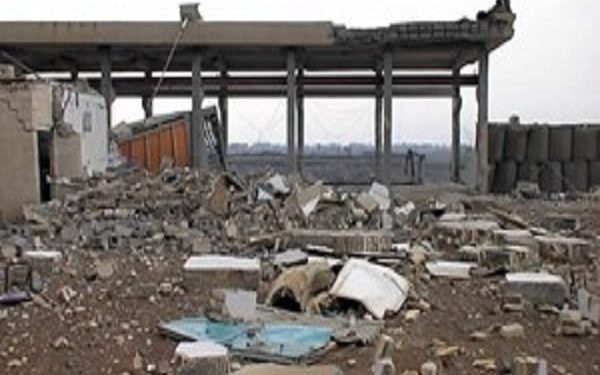 AT 3:30 a.m., Friday, February 8, 2008, in a criminal attack the agents of the terrorist Qods force of the Iranian Revolutionary Guards Corps(IRGC) blew up the Ashraf City water pump station by detonating more than 300 kg highly explosive TNT.
This anti-human attack against the water pump station located at Zorganieh area, 25 km west of Ashraf City, meant to increase pressure on the People’s Mojahedin Organization of Iran and the local inhabitants. The explosion has destroyed the water pumps, installations and employees’ facilities, and has cut off water flow to the Ashraf and surrounding villages.
The water pump station has been owned by the PMOI since twenty two years ago, and in addition to Ashraf City, has been providing water for living and agricultural needs of more than twenty thousand local inhabitants. It also has been providing drinking water for part of the Odhaim residents.
The pumping station has been under the protection of local residents and tribes in recent years and for the past few months the newly formed “Awakening Councils” have been protecting it.
Two days prior to the explosion, on February 6, a member of the Tribal Council, Sheik Hamid Dhiab who was in charge of the area’s security and protection of the water pump station was assassinated during a terrorist attack on his life. The Sheiks Council in the area held the terrorist Qods force of the Iranian regime responsible for this criminal assassination.
In sumer 2006, the mullahs’ regime blew up the water pipelines to Ashraf twice at locations nearby this station, and each time the damages were repaired by the help of local inhabitants and the Ashraf residents’ efforts. However, although the involved agents had been introduced by the PMOI and the people of area, the judicial and legal follow- ups have been left unanswered, and the Iraqi government officials have not considered the matter whatsoever. Meanwhile, the support by local inhabitants and measures taken by the tribes in the area were the only cause to prevent the Iranian regime and its agents from repeating terrorist and criminal actions.
Due to pressures and conspiracies by the mullahs’ regime, the Ashraf City has been under medicine, food and fuel blockade, aimed at serving the anti-human mullahs’ regime, in violation of the international conventions and humanitarian standards. However, the blockade is still in place despite the rejection of international organizations such as the European Parliament and the United Nations.
Halting water flow and explosion of water pump station and water pipes and installations is an anti-human, anti-Islamic measure by the clerical regime which is considered a war crime based on the 4th Geneva Convention against the protected persons and the inhabitants of the area.
The recent gathering of infamous agents of the mullahs’ intelligence service in Hotel Mansour in Baghdad organized by the regime’s embassy clearly indicates that the war crime against Ashraf residents continues and should be legally pursued.
The People’s Mojahedin Organization of Iran urges the Multi-National Force-Iraq, the International Committee of the Red Cross, the United Nations and particularly the government of Iraq to investigate immediately, condemn and legally pursue those responsible for this terrorist crime.