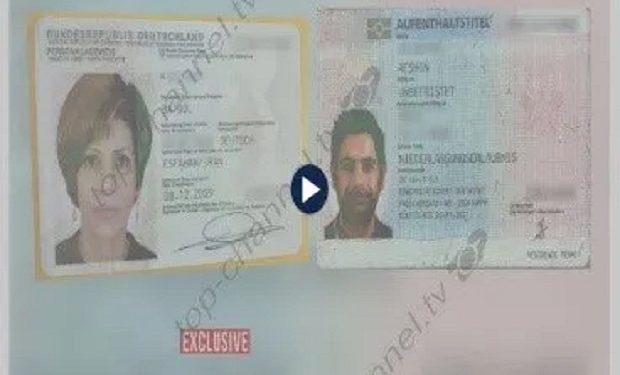 On Monday, August 1, 2022, Top Channel TV in Albania announced the expulsion of two Iranian agents from the country after 72 hours of keeping them at Rinas Airport in an anti-terrorism operation.
In the report, it is noted that at the airport, Afshin Kalantari and Batool Soltani were asked to return to Germany, where they came from, but “they refused to do so and were kept at the airport for 72 hours and then deported to Germany.” They were invited by a cover association (ASILA) of the Ministry of Intelligence of the Iranian regime, which was established under cover of helping Iranians living in Albania.
The invitation letter stated that “Afshin Kalantari and Batool Soltani who came to Albania from Germany will participate in the ceremony of their Iranian friend “. However, “the border police informed the anti-terrorism department of the state police as soon as the invitation was presented by the ASILA Association.” This association is “under surveillance due to its connection with the Iranian regime and measures aimed at harming the security of the members of the People’s Mujahedeen Refugees in Albania. “
“Top Channel adds: “Two weeks ago, by the order of the prosecutor of the anti-corruption and organized crime structure, ASILA’s premises were inspected by the National Investigation Department.” … “This is not the first case that Iranians with German passports are deported from Albania, in 2018 The State police announced that it prevented a terrorist attack on the Bektashian mosque. “
In this regard, two Iranian men aged 65 and 59 were arrested by the State Intelligence Organization and the anti-terrorist unit of the state police. These two Iranians were taking pictures at the time of their arrest and told the anti-terrorism officers that they were journalists and had come at the invitation of the Bektashi Supreme Council. ” While the following year, Ardi Valiu, the head of the Albanian police at the time, announced: “The terrorist group belonging to the foreign operations unit of the Quds Force is a secret operational unit that is responsible for planning and implementing terrorist operations and activities outside of Iran.”
https://www.youtube.com/watch?v=IFKca2hhRYY
Afshin Kalantari and Batool Soltani are agents who went to Iran together on December 25, 2006 from TIF (a facility under the control of American forces at Ashraf in Iraq) with a prior appointment with the Iranian Ministry of Intelligence (MOIS). In less than 3 weeks, Batool Soltani returned to Iraq after obtaining a passport from the MOIS to carry out a mission against the Mojahidin.

Colonel Leo McCloskey, one of the US officers responsible for the protection of Ashraf from 2088 to 2009, said in his speech on March 24, 2012, at a large gathering in Paris about Batool Soltani as an agent of the Quds Force, “She went to Iran from Ashraf. Within a month or two after she left, I got a frantic call in the middle of the night from one of our police stations outside of Ashraf saying that Ms. Soltani was back in Iraq with an Iranian passport.

. Well, shortly thereafter she did show up back at Ashraf, in protest, saying that her husband was being held captive by the people of Ashraf. I personally interviewed her husband, as I have interviewed thousands of other people in Camp Ashraf, along with family members. She was there at the behest of the Quds Force as an agent of the Iranian government.”

In this regard, The Iranian Resistance had announced in several letters to the ministers of the interior in the European Union countries that the MOIS and the terrorist Quds Force are engaged in exporting agents to various European countries to demonize the MEK and for espionage and paving the way for terrorism.
A letter dated April 16, 2008, to the German Minister of Interior, identified several of the Iranian regime’s agents if foreign countries who operate under the guise of “former members of the MEK”. They included Gholamreza Sadeghi Jebeli (Iranian passport number Z11029364), Batool Soltani Sedeh (Iranian passport number T12816605 issued in Isfahan on February 4, 2008). Both had entered Baghdad airport on February 10, 2008.
The same letter underscored: “The regime’s objective in bringing these people to Europe, in addition to slandering the regime’s opposition, especially the MEK, is espionage and laying the groundwork for terrorist activities against them. Admitting and giving free reins to the MOIS agents is a violation of the decision of the Council of Ministers at the April 1997 meeting in Luxembourg. Moreover, the presence of these agents endangers both the security of Iranian refugees and the security and peace in Europe… Take necessary measures to prevent the entry and residence of these people in European countries.”