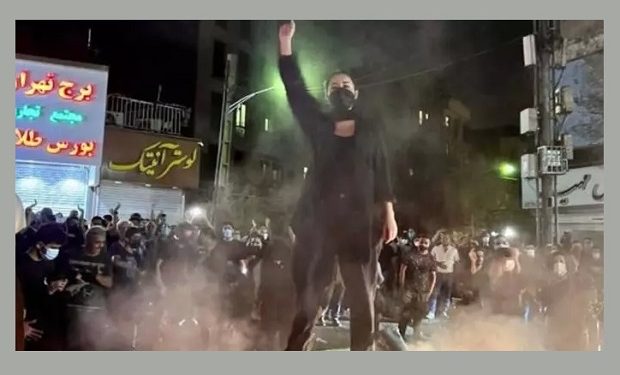 Real change is brewing in Iran as a nationwide uprising approaches its one-month milestone.
What began as a protest over women’s rights and the violence of Iran’s so-called morality police has become a conduit for broader expressions of outrage over 40 years of tyrannical rule resulting in endemic corruption, suppression, social restrictions, and lack of press freedom.

We use your sign-up to provide content in ways you’ve consented to and to improve our understanding of you. This may include adverts from us and 3rd parties based on our understanding. You can unsubscribe at any time.

Protestors are now confronting their rulers with an existential crisis as they set their sights on the regime and its supreme leader, Ali Khamenei. Chants of “death to the dictator” are being followed by protestors’ declarations that “we will fight, we will die, but we will reclaim Iran.”

Iranian protestors ‘will not give up’, says former freedom fighter
The clerical regime’s fierce crackdown has already resulted in more than 400 deaths and 20,000 arrests.

But the rebellion continues to sweep across the country with lightning speed, and demonstrators are surprising Western policymakers with their willingness to courageously shout down the Islamic Republic’s security forces.

That courage reflects a principled commitment to ending clerical rule, which in turn makes it abundantly clear that the Iranian people, and in particular the country’s youth, have had enough. This time, the cries on the Iranian street aren’t simply for reform. They are for regime change.

It is now impossible to ignore the potential for this uprising to lead to a revolution in Iran.

In a rare instance of public comment by a US intelligence agency, CIA Director William Burns recently observed: “These are incredibly brave people and many incredibly brave young women, and they are fed up in a lot of ways.”

“And they’re willing to take the risk of getting out and demonstrating because they’re fed up with economic decay, with corruption, with the social restrictions especially that Iranian women face, and with political repression as well.”

Unlike prior uprisings in 2018 and 2019, the popular discontent facing Iran’s mullahs today is not simply economic. It is political and social. The country-wide revolt features Iranians, young and old, from all walks of life.
In Tehran alone, home to a population of more than 10 million, demonstrations have unfolded in as many as 30 locations at once, denying the regime’s suppressive forces an opportunity to concentrate their shock troops.

The decisive role played by women, who in many instances continue to bravely lead the charge against the misogynistic regime, is particularly noteworthy. It is made even more remarkable by the fact that teenage girls have become highly visible as part of the unrest.

Several videos appeared on social media last week that showed them defacing images of the supreme leader, and chanting slogans to drive government officials and militiamen off high school campuses.

These young Iranians are risking it all for a brighter future. Meanwhile, the solidarity and unity on display across the nation is a testament to activities undertaken over the past several years by the Resistance Units that are affiliated with the leading pro-democracy opposition group, the People’s Mojahedin Organization of Iran (MEK).

These units, made up of ordinary citizens but comprising part of the PMOI’s vast activist and intelligence network, have helped to organize, galvanize, and prolong the protests.

The turmoil in Iran represents a vital opportunity not only for the Iranian people but for all Western democracies. It provides a fresh setting for bold new policy in dealing with a four-decade-old authoritarian regime – policies that are not glued to restoring the failed nuclear agreement known as the JCPOA, but rather to uplifting the interests and aspirations of the Iranian people.

In recent weeks, the Biden administration has taken limited action in support of demonstrators. They have imposed sanctions on the regime’s “morality police” and signalled that additional measures may be forthcoming.

Britain and Canada have followed suit, and the European Union is expected to formalize its own sanctions at a ministerial meeting on Monday.

But now more needs to be done.
Consistent with revered documents such as the American Declaration of Independence and the Preamble to the Universal Declaration of Human Rights, the President-elect of the Iranian Resistance, Maryam RAJAVI, recently called on world leaders to close ranks with freedom-seeking Iranians by acknowledging their right to self-defence and by calling out the Islamic Republic’s malign activities as an affront to humanity.

Western officials must make it clear that the Iranian people are in control of their own destiny and that they will stand with those that seek a democratic alternative to theocratic rule.

Prof. Ivan Sascha Sheehan is the executive director of the School of Public and International Affairs at the University of Baltimore.