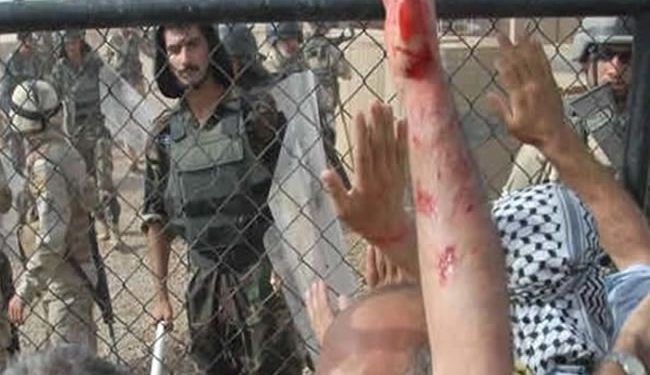 When the U.S. handed over control of Camp Ashraf on February 20, 2009 to the al-Maliki Government, it stated that it had received “full assurances” that the Iraqis would provide for the safety and security of the Residents. However, the Iraqi forces loyal to al-Maliki attacked Ashraf in July 2009, April 2011 and September 2013 which resulted in numerous deaths, scores of injured and seven abducted.
In July 2009 the Iraqi government deployed its armed forces around Camp Ashraf under the pretext of establishing a police station inside the Camp. Three months earlier, the Iraq’s National Security Advisor, Muwaffaq al-Rubaie who was in charge of Camp Ashraf revealed the purpose of this attack in a TV interview by saying that, “We want to close this file right today and not tomorrow. We want to close up this issue as soon as possible… Iraqi security forces will enter the camp gradually and will set up control posts and will run patrols and will start searching, and then they will launch attacks.” (Al-Furat Television, April 1, 2009)
At last on July 28, 2009 around 3:30-4:00pm, hundreds of Iraqi security forces (including police officers and army forces) gathered at the three gates leading into Camp Ashraf (East, North and Lions’ Gates) and staged an assault on the camp. They used “Humvees” and “bulldozers” to destroy fences and walls around the camp, recklessly moving in all directions at high speeds and targeting crowds of residents. The Iraqi forces, on foot, armed with guns, batons, some with nails, metal rods, cricket bats, chains, sickles, axes, teargas, sound grenades and water cannons, broke into the camp and attacked hundreds of unarmed residents. At some point, the Iraqi armed forces opened fire on the residents. According to USF-I eyewitness accounts, the attack was extremely violent and lasted for hours, ceasing sometimes after nightfall. The following morning, July 29, the Iraqi armed forces returned to the camp at around 10:15am and gathered at Tulip Square, near the Camp’s water plant. They again attacked the residents in the same manner and with the same weaponry used the day before. At FOB Grizzly -US Army’s base – the USF-I, Task Force 134, silently watched events. In addition to the Iraqi armed forces permanently based around Camp Ashraf, the other participants in the attack were army units from Baghdad, police units from Diyala province and Iraqi army Special Forces from the notorious 56th Brigade under the command of the Prime Minister. Students from a police academy, located two miles away from Ashraf, also participated in the attack.
The Camp Ashraf ambulance was shot at several times during the attack as PMOI doctors in the camp tried to take the wounded to the Ashraf hospital. During the fact finding mission, UNAMI examined the ambulance riddled with bullets holes.
During attack, once the residents had been overwhelmed, the Iraqi armed forces went on a looting spree, taking goods belonging to the residents such as generators, air conditioners, fans, tables, chairs and anything and everything of use for their poorly furnished base outside Ashraf.
Before the sunset of July 29, 11 residents had fell victims for the brutal attack, over thousands were injured and 36 residents were taken hostages by Iraqi forces. Many of those injured were in a critical state. Two of them died several months later due to severe injuries left from the attack and a medical blockade imposed on the residents.
According to Amnesty International, video of the attack demonstrate that Iraqi troops “deliberately driving military vehicles –such as Humvees and Rios “military truck”- into crowds of Camp Residents.”