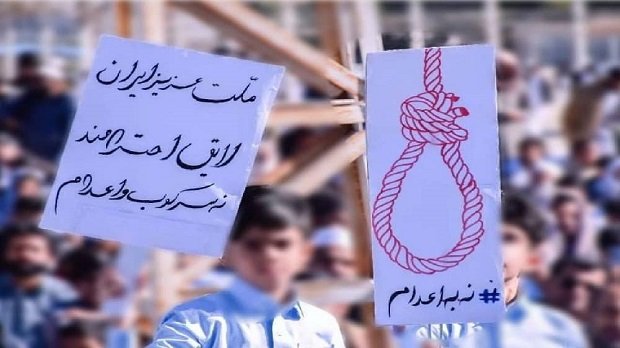 The board in the protest in Zahedan read: “The people of Iran deserve respect, not crackdown and execution”
The Iranian regime’s supreme leader, Ali Khamenei, delivered a speech on Monday, acknowledging the escalating confrontation between the ruling theocracy and the Iranian people, particularly the youth.

While trying to paint brave Iranian youth as foreign agents or overwhelmed with excitement due to the social media influence, Khamenei again called for the so-called “Jihad of explanation” or ordered more propaganda and more violence.

“The cure to the enemy’s propaganda on social media is the Jihad of explanation. In other words, spreading the truth using different voices, different words, and different initiatives. We cannot expunge the youths’ minds of the negative [enemy’s] impacts using clubs and sticks; we should use explanation!” Khamenei claimed.

Khamenei leads the oppressive apparatus with countless crimes, such as the recent execution of detained protesters, the killing of roughly 750 protesters, gunning down of 1500 civilians during the November 2019 uprising, and tens of thousands of hangings.

He did not have a sudden change of heart. The persistence of the uprising despite the regime’s heavy quash prompted him to acknowledge his failure in controlling Iran’s restive society using violence.

Khamenei knows that without oppression, the ruling theocracy wouldn’t last a day. So, he showed his absolute deadlock in his speech by making contradictory remarks in support of the recent political hangings.

“Instigating riots on the street was undoubtedly treason. The responsible parties and authorities should firmly and fairly react to treason, and they did,” he said.

Some Iranian netizens mocked Khamenei’s contradictory speech, saying that by calling for the “Jihad of explanation,” Khamenei meant execution.