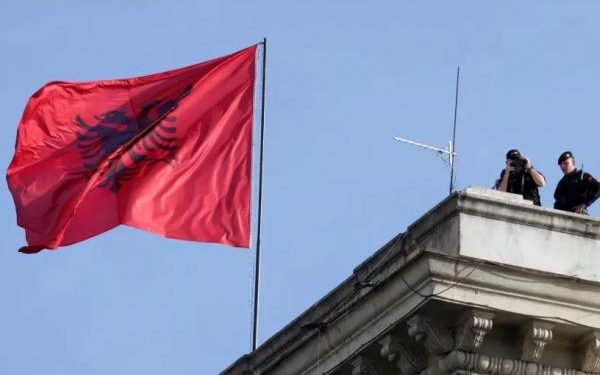 Exclusive.. Iranian regime is campaigning for Albanian entry visa for its terrorists

One of the branches of the Iranian regime’s notorious Ministry of Intelligence and Security (MOIS), the Nejat Association, has recently posted a statement on its affiliated websites under the guise of families seeking to visit their children in MEK compound, Ashraf 3, in Albania.  It called on the Albanian government to give entry visa to the individuals who are in fact agents of the MOIS in Iran introducing them as MEK family members.

According to the experts on the Iranian regime’s terrorism, the regime is involved in this new campaign because following the discovery of the Iranian Revolutionary Guards and its Quds Force terrorist plans in Albania, its major diplomats, including the ambassador and intelligence officer of the Iranian embassy, were expelled from Albania. Moreover, the Albanian government shut down College of Sa’adi which was an Iranian regime’s espionage center and a cover for recruiting terrorists. Now that the main path of the MOIS and the Quds Force to Albania has been blocked, the clerical regime is trying to pave the path for its terrorists to enter Albania through alternative routes, such as family visits or business.

Less than a year ago, on June 2, 2019, the Security and Counter-Terrorism Commission of the National Council of Resistance of Iran announced that the regime is trying to gain entry visa and residence permit for terrorists of Quds Force and the MOIS in Albania under the guise of plans to invest in villa construction and apartment building. This attempt was made under the name of a company affiliated with the criminal leaders of the Revolutionary Guards. The Iranian Resistance published the details and names of the company’s managers. In this regard, on March 22, 2018, the TV Report in Albania reported: “Law enforcement agencies in Albania are particularly concerned about Iranians who may be employed by secret services in Tehran to harm the protection of 3,000 Iranian refugees in Albania.”

Before the MEK members were transferred to Albania and while they were stationed in Iraq, the Iranian regime took advantage of the large presence of its terrorist forces and mercenaries in the country to send to Iraq its agents as family members of residents of Camp Ashraf and Camp Liberty.  They imposed psychological torture on the residents and made attacks to kill them. In Camp Ashraf, from 2010 to the end of 2011, for two years, these agents used 320 loudspeakers, threatening the residents round the clock with attacks by terrorist Quds forces. In April 2011, Iraqi forces, along with the Quds Force, attacked Ashraf residents, killing 36 of them and injuring hundreds. The same situation continued at the Camp Liberty. The MOIS sent its agents under the guise of families of Ashraf residents to stay just around the camp and identify the targets of the missile attacks. It is noteworthy that the Quds force, with the help of the Maliki government, made five bloody missile attacks against Camp Liberty, killing nearly 180 MEK members in Camp Ashraf and Liberty and injuring more than 1,400 others.

Simultaneously, some agents of the Iranian regime in Albania are supporting the MOIS petition and the regime’s pressure campaign on the government of Albania to issue entry visas to its agents. Two months ago, two Albanians, named Olsi Jazexhi and Gjergji Thanasi, were taken to an expensive luxury tour in Iran. On their return from Iran, they have been heavily involved in a demonization campaign against the MEK in Albania and are supporting the granting of entry visas to the Iranian regime’s terrorists to come to Albanian. This shows the commitment they have made to the Iranian regime during their trip. On his Facebook page, Gjergji Thanasi has linked and supported the MOIS petition. On his infamous website Gazeta Impakt, Olsi Jazexhi asked the Albanian government why it did not issue visas to such Iranian agents. At the same time, he has hysterically increased his attacks and vulgarities on the MEK in Albania. The insane reactions of the Iranian regime and its agents in Albania indicate the desolation of the regime and failure of its terrorist plans to this point.