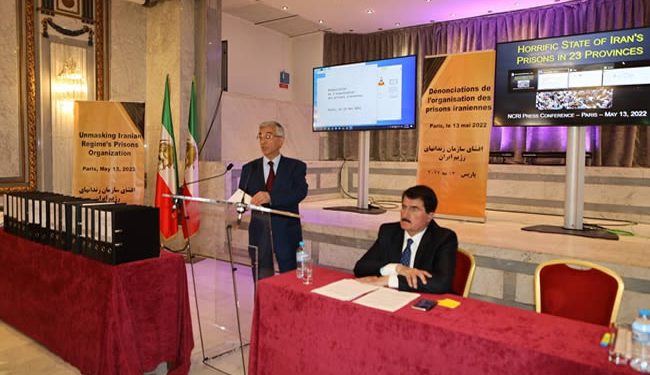 On Friday, May 13, the National Council of Resistance of Iran (NCRI) held a press conference in Paris, making public for the first time the hitherto undisclosed names of over 33,000 officials, interrogators, torturers, and executioners in Iran’s Prisons Organization and over 22,000 of their pictures.

During Friday’s conference, Behzad Naziri, NCRI’s representative to international organizations,  referred to the ongoing protests across Iran and the regime’s systematic crackdown on dissidents. He pointed to the recent demonstrations in dozens of Iranian cities over the country’s worsening economic situation and the nationwide protests by teachers. Naziri said that Iran’s ruling theocracy has arrested “hundreds of young people during the recent protests, as well as dozens of teachers.” He underlined that these arrests are part of the regime’s futile efforts to prevent protests from spreading across the country.

Naziri presented a video showing the names of more than 33,000 regime prison officials, including top authorities, interrogators, intelligence agents, executioners, guards, and mercenaries. He also presented the pictures obtained from inside Iran by the NCRI’s main constituent, the People’s Mojahedin Organization of Iran (PMOI/MEK) of many of these same individuals.

He also revealed the names of the key staff members of the Prisons Organization. “In this part, the location of the different rooms and phone numbers are available,” he added while presenting the evidence.

“The Prisons Organization is one of the most horrific and criminal organs of the religious fascism ruling Iran to conduct repression, torture, and execution,” Mr. Naziri said.

He also referred to Iran’s deteriorating human rights situation since Ebrahim Raisi became the regime’s president. Raisi played a key role in the 1988 massacre of over 30,000 political prisoners in Iran.

Mr. Naziri emphasized that since Gholamhossain Mohseni Ejei became the regime’s Judiciary Chief, “the killing of prisoners under torture has continued. In many cases, the judicial authorities claimed that prisoners had committed suicide or had tried to present their death as a natural death.”

Mr. Naziri was joined by Ali Safavi from the NCRI’s Foreign Affairs Committee. In his remarks,  Safavi pointed out the dreadful situation in Iranian prisons. He presented over one hundred pictures of overcrowded cells in 23 out of 31 provinces across the country obtained by the MEK.

Safavi explained the dire conditions of prisoners, whom, he said, were being denied their fundamental rights. He presented documents that showed that on average the number of actual prisoners was three to four times greater than the officially announced capacity of each prison.  “As you see in the pictures, they are forced to sleep like sardines and are deprived of their basic needs,” Safavi said.

NCRI’s conference on Friday and its damning revelation once again underlines the need to hold Iran’s genocidal regime accountable for its human rights abuses.

Reacting to the Iranian Resistance’s recent revelations of the torturers’ names, Mrs. Maryam Rajavi, the NCRI’s President-elect, said: “The shocking documents about prison conditions in Iran under the mullahs are a glimpse of the atrocities committed by a regime which has executed 120,000 political prisoners and murdered thousands more protesters in the past four decades.”

“The formation of a UN fact-finding mission to inspect Iran’s prisons is imperative. The dossier on the crimes of the ruling religious fascism must be referred to the UN Security Council. Its leaders, especially Khamenei and Raisi, must face justice,” Mrs. Rajavi added.

“Inaction vis-à-vis the crimes of a regime, which is a disgraceful stain on contemporary humanity, is tantamount to rejecting the values upon which the UN and the European Union have been founded and for which tens of millions of people have sacrificed their lives,” She emphasized.