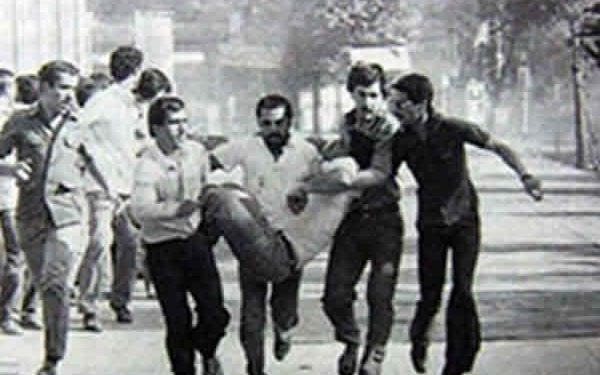 For some time I was working at Sajjad Hospital located on Dr. Fatemi Square. One night armed security personnel had rushed three teenage boys with a bullet wound, saying they are PMOI supporters and were shot because they had resisted being arrested. We took all the young men to the operation room and the armed Revolutionary Guards members came inside. The physician protested and demanded they leave the room, but they paid no attention and threatened him by placing their guns on the surgeon’s head. After the surgery they immediately transferred two of the young men – while still unconscious – to Evin Prison. Very soon that these two innocent young men would be executed along with the hundreds of others who were placed before firing squads each night, without even giving their names.

The third wounded boy had an injured jaw and in dire conditions. He was transferred to the ICU and a number of IRGC members were keeping watch. There was a sense as if all of us in the hospital were committed to not allow this third young man be taken by the IRGC. I went to his side under the excuse of controlling his status and while getting his blood pressure and other tests I told him carefully, “If you hear me, pay attention, I am one of your sisters and a supporter of the PMOI. The symptoms of someone who is suffering from brain damage is snarling from the throat, tension, severe moves with their hands and arms, and …” A few minute later he began showing these very symptoms. I realized he was aware of the situation around him. He was very young and he probably was shot for reading a PMOI daily, or taking part in simple early morning gatherings or talking about the PMOI and supporting them. But he was there before us on that hospital bed, fighting for his life. The IRGC member in the room left for the bathroom for a few minutes and the head nurse in that branch was waiting for this exact moment. She went to his side and asked him to trust her, give her his name and address. Hearing the nurse’s voice he barely managed to open his eye and give his name and home telephone number. His name was Hossein. His innocent, yet very determined, bright brown eyes showed he had an undefeatable will and courage. He tried to smile with his swollen and wounded lips, attempting to take a look at the faces of those who were helping him day in and day out.

We informed his family and asked them to only come and see him from a distance. His mother came, and while standing alongside the bed of another unconscious patient, wept slowly like the rain. At that moment she was probably remembering the nights when she told stories for him to go to bed, or maybe his sweet childhood years, or the dreams she had for her smart and brave son. At times her lips would tremble as if she was begging, maybe praying to God… Whatever it was, her entire being was full of plea. Hossein never learned of his mother’s presence and while unconscious he lost his life three days later…

Happiness is still ground for punishment in Iran