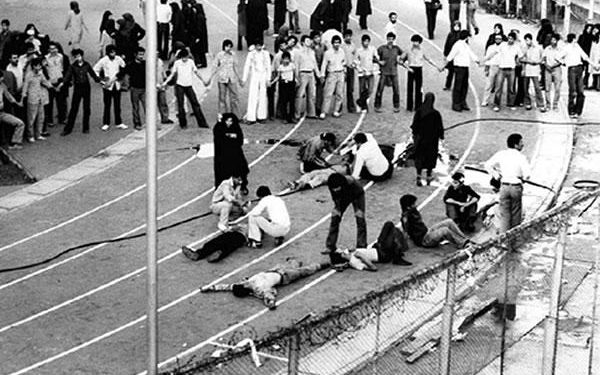 In Tehran’s Sina Hospital we continued our political activities promoting the People’s Mojahedin Organization of Iran (PMOI/MEK) cause until June 20, 1981. This is a historical day for Iran that unveiled Khomeini’s viciousness for all of history. On this day I was working at the hospital and I knew the PMOI/MEK had organized a peaceful demonstration. It was in the afternoon when they suddenly began rushing those killed and wounded into the hospital. They were suffering from bullet wounds. We took the dead into the morgue and placed the wounded into various sections, and some were taken to the surgery room. Other hospitals reported that members of the Revolutionary Guards had attacked, taking all those wounded with them. This made us start to think about doing something to save the wounded’s lives. Immediately we began working together to discharge the more lightly wounded out of the hospital and send them home. Others who were more severely wounded or unconscious were placed amongst other ordinary patients. Even the informants in this hospital were unable to find one person other than one of the dead who was a high school student with a bullet wound to the forehead. The Revolutionary Guards members took the body while we were able to save the others.

The next day the Revolutionary Guards raided the hospital to attack us, the known PMOI/MEK supporters. Our co-workers informed us to not go to the hospital because we would be arrested. From that very night the regime’s agents began overtly executing dozens of people, including high school juveniles who had refused to even give their names.

Helping the wounded is a crime punished by death!!!

We were all shocked and no one could yet believe what they saw or heard. My friend, Shekar, was arrested on June 21st at Apadana Hospital. For 24 hours she had been working to help the high number of wounded patients, and she was still providing medical care when she was arrested and transferred to Tehran’s notorious “Evin” Prison. My friend Tahmine, I and many of the hospital employees fled the facility and went into hiding. We couldn’t even go to our own homes because they had attacked our homes to arrest us. Strangely, our “crime”, as they had told our families, was “helping the wounded”; this was our profession and there is no law in the world that says a physician or nurse can be arrested for this “crime.” This is the first and last duty of a doctor or nurse. However, in Iran under the mullahs’ rule this in itself is considered a crime punished by death.

The days that I was living in hiding we had secretly gone to one of my relative’s homes and continued working at a private hospital. My main goal was to have a certain place. The nights that I didn’t work at the hospital I would stay as a guest with various friends and relatives.