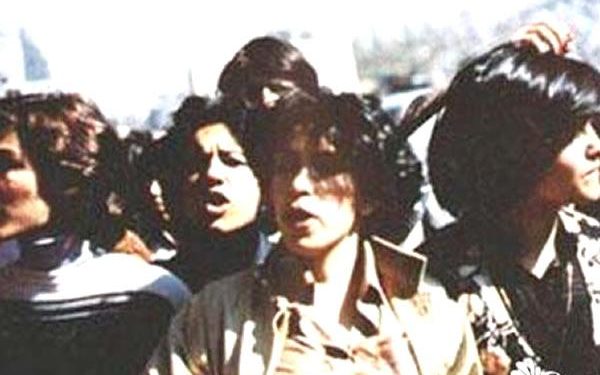 It was the spring of 1979 when we were experiencing freedom after the oppression of the Shah’s rule.

One day I saw Faride, one of my colleagues, and a number of other college students outside a hospital getting prepared to start distributing People’s Mojahedin Organization of Iran (PMOI) pamphlets. I said I’m coming, … and this was the beginning of my work in promoting the PMOI’s viewpoints. We were distributing pamphlets, selling PMOI daily newspapers and PMOI books, and informing people of their candidates in the upcoming elections. There wasn’t one day, however, that we were not attacked by the regime’s club wielders, known in Iran as “Hezbollah” members. We had our own instructions not to get involved in any physical scuffle because we were on political missions to reveal the true nature of Khomeini and his ruling mullahs. We almost always returned home with many bruises and wounds.

I was once attacked by Hezbollah members in Tehran’s “Dr. Fatemi Avenue”. I was lucky because a number of people working in a building on the other side of the street rushed to my support and forced the Hezbollah members to flee. They gathered all my torn up newspapers and gave me some money, even more than what my newspapers were worth. They were very kind to me and I found my way home safely.

Mandatory hijab: A tool to oppress and humiliate women

The entire population was protesting mandatory hijab regulations imposed by the mullahs’ regime. Nurses, like myself, resisted for a long time. Little by little we were faced with groups of club wielders splashing acid on women’s faces and … Along with my friends Tahmine Rastegar Mohgaddam and Shekar Mohammadzadeh, all of us working in hospitals, we were already identified and hated as dissidents by the regime’s elements. Despite the fact that Tahmine and Shekar wore headscarves, they continued to be targets of their insults and oppression. Mandatory hijab had merely become a tool for the oppression and humiliation of women, and to impose a campaign of crackdown across the country.

One day Shekar was expelled from work under the bogus charge of entering the hospital’s male physicians dormitory. There was a wave of protests by all the physicians and nurses in that hospital. One day Shekar’s mother came to the hospital screaming, “I will force you to tell the truth, that you are expelling her because she supports the PMOI. You are all cowards and you raise filthy allegations against her. I am honored that you are expelling my daughter for supporting the PMOI, go ahead! But I will not allow you to insult her.”

These protests reached the point that hospital officials were forced to revoke Shekar’s expulsion, but they did transfer her to Seena Hospital where I worked.

Shekar also worked in a private hospital to provide more financial aid to the PMOI.