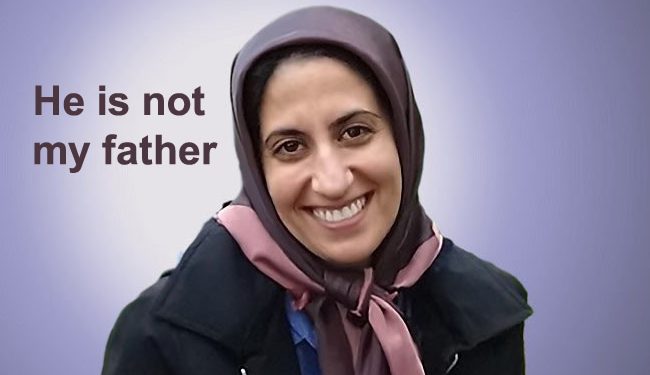 Fereshteh Khalili: He is not my father!

Recently, the Nejat Association, which is a branch of the notorious Iranian Ministry of Intelligence, published a fake letter on behalf of  the father of Ms. Fereshteh Khalili, a member of the People’s Mojahedin of Iran (MEK / PMOI) living in Ashraf 3 in Albania. This letter is part of the demonization and defamation campaign against the MEK.

Fereshteh’s real father, Mohammad Reza Khalili was a member of the MEK, murdered by the Iranian regime when she was less than four years old.

The fake letter reads in part:

“Oh, my daughter Fereshteh, ‌ I don’t know what conditions you are in, with the coronavirus conditions that occurred in your place… Think about yourself… Save yourself and choose a free life for yourself…”

After reading the fake letter, Ms. Fereshteh Khalili wrote in Iran Efshaga website: “It’s really shocking how far this regime is lying. Lies under the name of a fake father!”

No one in the world, but the Iranian regime would produce such nonsenses. How feeble and stupid a regime must be to fabricate such scandalous lies? Fake news is not a new phenomenon at all and it is more or less common all over the world and social networks, especially by the dictatorial regimes and their security agencies use fake news in various fields, but producing fake fathers are completely new.

The fact is that the Iranian regime is internally engulfed in crisis, and the popular resistance and support for the MEK is increasing day by day. Therefore, this regime has increased its psychological warfare against it’s democratic opposition and produces fake letters against the MEK under cover of PMOI / MEK families.

For example, in April and May 2020, the Nejat Association affiliated with the Ministry of Intelligence of the Iranian regime announced a petition signed by 10,000 families of the members of the MEK based in Albania requesting Albanian officials for an entry visa to travel to Albania to visit their children (in the time of pandemic!). The regime is trying to send its agents to Albania under cover of the MEK family members. Among these so-called 10,000 members of the MEK family, the signatures of people like Hassan Heyrani, Massoud Khodabandeh, Anne Singleton and an Albanian named Gjergji Thanasi can be seen.  They are not only notorious agents of the Ministry of Intelligence, but have no family in the MEK at all!

On the other hand, the Ministry of Intelligence has published the names of many of the MEK families without their knowledge as signatories of the letter. But when the regime failed to achieve its goal with a letter containing 10,000 fake signatures from MEK families, an Albanian named Olsi Yazexhi, allegedly employed by the Iranian Ministry of Intelligence, conducted video interviews with so-called MEK family members against The Albanian government and the MEK.

In this regard, A number of Mojahedin in Ashraf3 wrote in an open letter to the Albanian authorities on June 23, 2020:

“…The Iranian regime’s propaganda and demonization campaign against us continues to pave the way for further terrorist acts. For this reason, our families have been taken hostage in Iran, and the regime is abusing them against us … Olsi Jazexhi and Gjergji Thanasi publish the content of the Iranian regime’s websites and cover associations  on Gazeta Impakt or on their own Facebook pages of which only a limited number of members of the Revolutionary Guards and the Iranian Ministry of Intelligence are their readers. The Iranian regime then publishes the same material once again on its media as if the Albanian people support the demands of the Iranian notorious Ministry of Intelligence (MOIS). We have been made aware that the regime then distributes the same reports in prisons to justify further pressure on prisoners and our families…”