Fake petition of Iranian Ministry of Intelligence against MEK in Albania

An attempt to pave the way for Iranian further terrorism

In recent days, the Iranian regime has published an online petition in its affiliated papers and websites addressed to the Albanian Prime Minister Edi Rama.  The signatories introducing themselves as families of the Iranian Mojhahedin (MEK) members in Albania are requesting entry visa to Albania. They claim that more than 8,000 signatories want to meet with their relatives who live in Ashraf 3 in Manza, Durres. The bogus petition, which has nothing to do with the families of the MEK members, is produced by Iranian intelligence and the Quds Force, and brazenly claims, “Our children are being held captive by terrorists in Albania… At the mercy of your government, they do not have any communications with the outside world, especially with family and friends. Our question as suffering families is how long do you want to continue in this situation?”

For sometimes, terrorists from the Iranian regime were sent to Albania as diplomats. But after a number of Iranian embassy diplomats, including its ambassador, were expelled from Albania in December 2018 and January 2020, and the regime’s cover-up terrorist center, Saadi College, was closed in Tirana, the Iranian regime’s terrorist activities against its opponents in Albania suffered severe blows. Their easy entry routes to Albania were closed. Therefore, the regime has resorted to other tactics to send agents and terrorists to Albania, one of which is so called family visits. Of course, the Albanian security apparatus is familiar with this tactic of the Iranian regime. In October 2019, the Albanian police chief unveiled a terrorist network linked to the Iranian regime’s Quds Force. According to the Albanian police, a member of this terrorist network named Alireza Naghashzadeh was traveling to Albania on the pretext of visiting his mother, who was with the MEK.

The MOIS has identified three of its agents as leading the petition. They (Two brothers, Ibrahim and Massoud Khodabandeh, and his wife, Anne Singleton.) are identified in a US Congress report commissioned by Pentagon as MOIS agents.  Ebrahim Khodabandeh in Iran, who is being introduced by the regime as the director of the “Nejat Association”, claims that this petition is his initiative. The “Nejat Association” is a cover association and for all Iranians, is known as one of the branches of the MOIS. Massoud Khodabandeh, another infamous MOIS agent stationed in UK, is promoting the petition. He is also very hated by Iranians because of his affiliation with the MOIS. His wife, Ann Singleton, has also been described by British lawmakers as a spy for MOIS. There are ample documents and evidence that the couple was involved in the campaign leading to massacre of the MEK members in Iraq, and that they are complicit in the massacre of Ashraf and Liberty camp’s residents, which can be prosecuted.

Nevertheless, the one who in collaboration with these detested individuals is leading this MOIS terrorists favored campaign in Albania is an individual Olsi Jazexhi. He has recorded a one-hour interview, filled with nonsense, attacking MEK, with Ann Singleton, and make advertisement around it. Olsi Jazexhi admits that in 2011 he attended training courses at Al-Mustafa Religious University in Qom. Al-Mustafa University is widely known to be a tool for indoctrinating extremist religious ideas to foreigners and recruiting candidates for the regime’s terrorist and military activities outside of Iran, including direct participation in Iran’s wars in the Middle East.

Agent Ann Singleton in Iraq, in front of MEK Camp Ashraf- While families of Ashraf residents were persecuted, arrested and tortured in Iran for just phoning their relatives in Camp Ashraf, Iranian notorious MOIS transferred its agents under the name of family members of the residents to Ashraf as if they want to visit their relatives. However, they participated in campaigns preparing the grounds for massacring MEK members. They were also engaged in implementing psychological torture on MEK members around Camp Ashraf using 320 strong loudspeakers blaring loud noise, profanity and cursing for two years.

Olsi Jazexhi at the New Horizon conference in Iran. New Horizon is affiliated with the IRGC’s Qods Force and was blacklisted by the US Treasury Department in February 2019 due to its destructive activities. The Treasury Department announced that the New Horizon conference is a cover for recruiting foreign spies”. This photo was brought to the attention of the Albanian viewers in Ora News 360 talk show. However, Olsi Jazexhi refused to explain his cooperation with New Horizon. The FBI has been tracking and prosecuting the American nationals attending the conference. 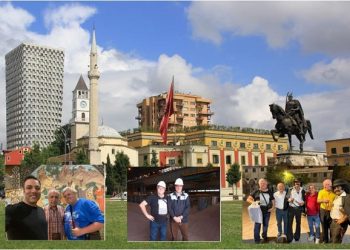