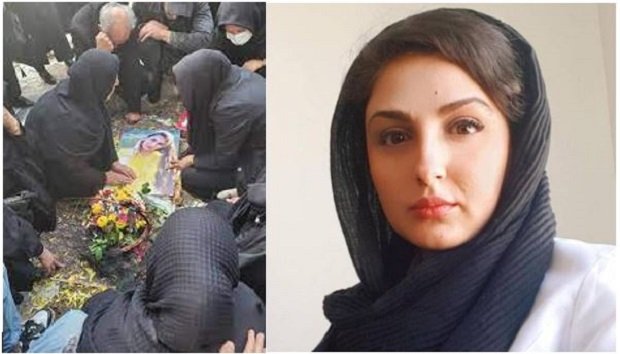 Dr. Aida Rostami, a 36-year-old Iranian physician, was found in dead in December, with her body showing signs of torture. According to news reports, she had lost one eye, and half her face was crushed.

Her crime? Rostami was a doctor committed to her Hippocratic oath. She was tortured to death simply for providing medical treatment to anti-regime protesters in Iran. On Dec. 12, she was taking care of several wounded protesters in Ekbatan District of Tehran when she left a protester’s house to get supplies and was arrested.

Rostami vowed to become a doctor after losing her father to cancer when she was young. She risked her life saving Iranians during the pandemic, only to end up being tortured to death for helping her countrymen through a different kind of crisis.

Iran’s anti-regime protests have continued for more than 100 days with slogans such as “death to Khomeini,” referring to Ayatollah Ruhollah Khomeini, echoing all over the country. Tehran has responded with a heavy and ruthless crackdown. According to the main Iranian opposition movement, the People’s Mojahedin Organization of Iran, or PMOI/MEK, at least 750 protesters, including at least 65 juveniles, have been killed. As many as 30,000 have been arrested.

Accumulating reports describe security forces raiding hospitals and taking away protesters to be tortured and interrogated. A number of hospital managers have revealed that they have been forced to provide lists of patients to the Islamic Revolutionary Guard Corps. As such, many protesters have been avoiding hospitals, even after being severely wounded.

This phenomenon has spawned a network of “night doctors” who are dedicated to treating injured protesters outside of the hospital system and out of view of security forces. That network has produced many unsung heroes, and Rostami is not the only one to lose her life.

Neither is the current situation unique. In the 1980s, when I was a medical student at the University of Tehran in Iran, I treated several activists at their homes or wherever they were hiding from the authorities, with almost no equipment and meager supplies. I was arrested and severely tortured during that time and eventually transferred to a ward crammed with prisoners at Evin Prison. As soon as they found out that I was a medical student, my secret role as a prison doctor began.

I was lucky to leave prison alive, considering that I, too, was an activist with MEK. Then, as now, the MEK enjoyed massive support among people from all walks of life, including technocrats and physicians. It has been the clerical regime’s archenemy since its inception, and as such, some 120,000 MEK activists, including more than 30% of my classmates, have been executed in Iran over the years.

After fleeing Iran, I became a professor of surgery in the U.S. and a surgeon-scientist, but although more than three decades have passed, I’ve never forgotten the anguish I saw among young activists in Iran, for whom I could do so little.

Iranians from all walks of life have risen up against the regime to establish a democratic republic. Once again, I find it encouraging that so many Iranian medical professionals have been defying the regime’s efforts to entrap and arrest injured activists. Furthermore, I am proud that the MEK’s resistance units have helped coordinate the network of night doctors while also playing a central role in the uprising.

Heroes such as Rostami are making the ultimate sacrifice to bring about democracy and freedom in Iran. Considering my own experiences, I can well imagine what Iranian doctors and nurses have been going through since the uprising began in mid-September.

By the end of November, it was reported that at least three doctors had been slapped with capital charges including “enmity against God.” It became apparent that these charges might lead to the defendants’ executions. At least two people have been hanged for their participation in the protests, and authorities have warned that many more could quickly follow.

The international community has duly condemned the two known executions and the accompanying death sentences, as well as the reported rapes of women in custody and the mass shootings of protesters in the streets. There is value in those statements, but with Iran’s nationwide uprising entering its fourth month, it is becoming ever more important for Western democracies and human rights defenders to take concrete actions in support of the uprising, its participants and the principles of those supporting it, including Iranian medical personnel.

The international community should vociferously condemn the Iranian regime’s atrocities and take actions such as imposing serious sanctions, halting negotiations with the regime and recognizing the right of Iranians to defend themselves. Medical associations should urge the U.S. government to do whatever it can to help Iranian protesters.

Rostami had the courage to risk her life for her commitment to her Hippocratic oath. Countless activists are demonstrating the same courage today — but also waiting to see what the free world will do to support them in their battle against the regime in Tehran.

Do our policymakers have the resolve to show the ayatollahs that they can no longer get away with the crimes they have been perpetrating for more than 40 years? I am hopeful at the start of 2023.

Dr. Firouz Daneshgari is an Iranian American surgeon and scientist based in Ohio.

Submit a letter, of no more than 400 words, to the editor here or email letters@chicagotribune.com.