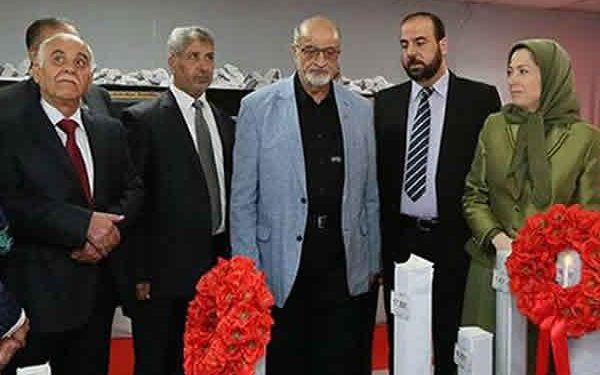 Brigadier General Mostafa Ahmed al-Sheikh, Chair of the Free Syrian Army Military Council and former commander of the chemical branch and security officer of the northern region in Syria, is the first general to have separated from the Assad army and joined the opposition. He participated in a session held in France by the Iranian Resistance in solidarity with the Syrian opposition with the presence of Iranian opposition leader Maryam Rajavi. He went on to post the following piece on his Facebook page:

In the harshest moments of darkness that history recalls for decades and centuries to come as a fundamental development for mankind and their future, we bear witness significant leaps made as a result of such alternating events. In a period in history, Zenobia, the wife of Azine, rose to once again prove the ability within women in the ranks of senior leadership.

This, however, will never be accomplished or realized without specific conditions, of which the most important is the general cultural status quo. Such circumstances are usually adequate for the rise of men, and leaders that are remembered as individuals that changed the course of history and brought about significant change in a way that their messages remain in history books we continue to read…

I received an invitation from the Iranian Resistance President (People’s Mojahedin Organization of Iran – PMOI/MeK) to take part in a dinner during the holy month of Ramadan, held in solidarity with the Syria revolution, emphasizing on unifying objectives and the fate of differences currently seen in the Middle East, especially in Syria. I was surprised to receive this invitation, as if I was placed in a situation demanding a fair-minded response from my part.

The struggle of this organizations has continued tirelessly for 37 years against the mullahs’ regime in Tehran. All those attending this session were looking at this group in awe. I was witnessing in precise detail their organized methods and discipline in their leadership ranks, and their high level of knowledge and culture. All of them came from different cultural levels, and were working very hard without any pay. What caught my attention was that this large group includes men, intellectuals and politicians who have said aside all of life’s leisure and devoted their entire lives and time to their cause, in a way that you cannot believe what you see or hear. Men that have fully separated from their wives and all believe in a common idea, and pledged to continue their struggle until their cause is realized. It is an all-out leadership to the precise meaning of the word, in which President-elect Maryam Rajavi is present. She became acquainted with this struggle from the Shah’s era in Iran, and then the mullahs’ rule. She was a field military commander who fought with the weapons of armored vehicles. She has lost a significant number of her family members who were executed by the Shah, and the mullahs’ rule. A woman weighing no more than 50 kilos, known for her decency and virtue. Despite the signs of pain and suffering in her face that strikes the emotions of all observers, she is full of the power of intuition.

I listened with all my heart to her speech, and also in a private meeting without the media being present, I again listened to her words very carefully. I will not hide my emotions that during that period I was thinking of nothing but Zenobia. I saw with my own eyes that they are like holy men and women that I could not comprehend the level of their purity in our time in history. All of them worked like a bee hive, without any noise, in deep respect, humility and modesty. There is no other example in any other country that has their potential and discipline! I saw with my own eyes how a doctor and professor was serving food for the guests, and there were no foreign workers paid to do their chores. I watched closely all their moves, and looked deep down, and with all my effort I tried to find something out of the ordinary, anything unorganized, a sign of disrespect… there was none to find.

Just one look at Maryam Rajavi is enough to obtain what you have been looking for, from the discipline and respect that I witnessed, to knowledge and culture, without any iota of discrimination between human beings.

Expertise in their work, massive potential, along with their hard efforts is quite visible from bottom to top in their leadership. And most importantly, working as a group is a part of their culture, approach and method of work.

I was in my thoughts for a long time thinking how we can implement this experience in our events in the Syrian revolution. However, I cannot control my tears for my people, my country, and the current circumstances we have found ourselves engulfed in. Anyhow, this will not be possible unless this resistance becomes victorious.

This is a precedent [movement] able to convince the world to delist them after a 13-year effort, and they truly deserved it. I am not at all overstating if I say there is no other example like these grandees, and especially the highly praised and dignified Maryam Rajavi. With such a precedent, those involved will become active, and with such a precedent, we Syrians will strive to gain victory from dictators.

Truly, my conscience and feelings are in such sorrow for our defragmented and contradictory situation that has led to nothing but more and more destruction. Despite the fact that people across the globe are touched and inspired by our revolution, and our people have become precedents for bravery and sacrifice, we still lack many things. We must rid ourselves of any signs of ignorance, backwardness and any thoughts of individual interests. We must rally together and unite our efforts, so that maybe this day and age will make us less unfortunate.

They wept for our martyrs. With your own ears hear the voice of the interpreter who cried for our revolution’s victims. See with your eyes the woman whose eyes were full of tears because of the situation of our people and their pains and suffering, and believe me that I am not overstressing when I said with pride that Maryam Rajavi is the Zenobia of our era.

Hail to the martyrs of this heroic resistance, all resembled in the Zenobia of this era, Maryam Rajavi. Many hails to this resistance that deserves us Syrians’ gratitude and appreciation for standing shoulder to shoulder with us. Before the eyes of this weak world, without the slightest of fear or shame, they have openly stood with us.

Hail to them as they deserve victory, and let us hope the Iran of tomorrow is in the hands of these grandees.

To fight, or to give in?