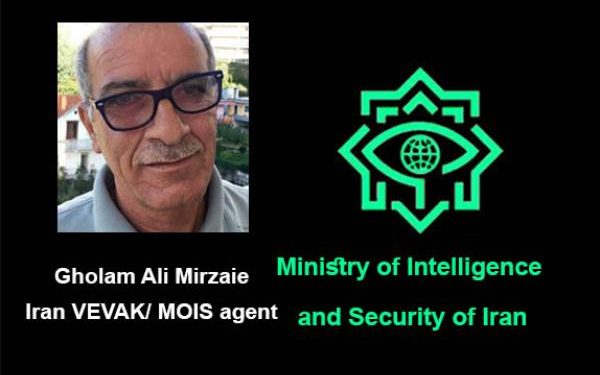 Gholam Ali Mirzaie, the stooge of the Iranian regime in Albania received his ticket to go back to Iran to embrace the Mullahs

Finally, Gholam Ali Mirzaie received permission to fly back to Iran on Saturday 26 Dec 2020. He spent three years spying and providing services for the Iranian Ministry of Intelligence (MOIS) in Albania. He also was used on numerous occasions to demonize the PMOI – MEK by spreading false accusations.

The MOIS only confirmed his return to Iran on the condition of full collaboration with it, by providing information and spreading propaganda against the PMOI – MEK in Albania. He was one of those who was interviewed regularly by the so called friendly journalists. The journalists were all part of the Iranian propaganda machine sent to Albania to conduct a discrediting campaign against the PMOI – MEK.

The Persian Division of BBC reported on November 11, 2019 that Gholam Ali Mirzaie is seeking help from the Iranian Embassy in Tirana and at the same time, his family has been negotiating with officials in Tehran. However, he has not yet received a response from them. Therefore, without obtaining citizenship and a passport he is stranded wishing to return home.

Gholam Ali Mirzaieh was an army officer in the dictatorial regime in Iran. He was taken prisoner during the Iran-Iraq war in 1980. He spent nearly 9 years in the prisoners of war camp in Iraq and after being released he refused to go back to Iran. In the presence of the representatives of the International Committee of the Red Cross (ICRC), he requested to join the PMOI – MEK and the Iranian National liberation army that was stationed in Camp Ashraf in Iraq. His request was accepted by the PMOI – MEK. He along with other Iranian prisoners of war who had asked to join the PMOI – MEK was interviewed three times by the ICRC to make sure that he had taken this decision with full awareness and by his own free will.

During the last 13 year period between 2003 and 2016 in which Gholam Ali Mirzaie was in Iraq, he was interviewed many times by the American forces and even twice by the representatives of the Iraqi government and UNHCR in Iraq. In all these interviews they were reassured by him that he had joined the resistance voluntarily.

After Gholam Ali Mirzaie was moved to Albania, on 4 September 2016, PMOI – MEK told him to go about his desired life. Once again, he refused this request and asked to be a member of the PMOI – MEK. However, after a short while he was recruited by the Mullah’s MOIS and established his contact with the regime’s embassy in Tirana.

Upon his recruitment by the MOIS, he started to claim that PMOI – MEK has mistreated him for the past 30 years. However, he gives no explanation on why despite all these alleged mistreatment on repeated occasions he refused to leave the PMOI – MEK and go about his desired way of life.

Activities in Albania in return for money from MOIS

Gholam Ali Mirzaie worked under the supervision of another notorious agent of the Iranian regime, Hassan Heyrani in Albania. Hassan Heyrani runs a café in Tirana by the name of Frank, a hangout for the MOIS agents. MOIS reportedly pays 300 to 400 euros monthly to each of its agents through Hassan Heyrani. In some cases -similar to Gholam Ali Mirzaie- if the relatives cooperate with the MOIS, the money is sent through them in Iran.

Gholam Ali Mirzaie’s son, Ali, a resident in Iran, collaborated with the MOIS. During the years 2010 to 2012, in complete coordination with the criminal agents of the al Maleki, then Iraqi prime minister,  Ali ad his mother were dispatched to Iraq to take part in  psychological warfare against the PMOI –MEK members. The aim behind dispatching the MOIS collaborators  to Ashraf and Liberty camps was to prepare the ground for mass killing of  the PMOI –MEK members which finally ended up in 1st of September massacre in Ashraf one.

On 7 May 2019, when Gholam Ali Mirzaie was still in Albania, the “Nejat Society” website of the MOIS posted: “The family of Mr. Gholam Ali Mirzaie is well known between the families in connection with the Nejat Society in Iran. His wife Mrs. Fereshteh Mehdian is one of those who joined the first group of families who went to Camp Ashraf and stayed there for a long time in Iraq. She has also been active in international conventions campaigning against the Mojahedin[PMOI –MEK].”

The Nejat Society is one of the branches of the Mainstay of Intelligence in Iran.  Its prime task is to recruit agents to spy and carry our suppressive measures on the families of the PMOI –MEK members inside Iran. A number the families who did not cooperate with this society against the PMOI –MEK and traveled to Iraq to visit their loved ones in Ashraf were arrested, imprisoned or executed after returning back to Iran.

In an interview with Symaye Azadi TV channel in 2010, Gholam Ali Mirzaie referred to his son and wife as the hirelings of the MOIS. They were among a group of people who were dispatched by the MOIS and the Nejat Society to Iraq to torture PMOI-MEK members by 320 high powered speakers installed outside Camp Ashraf in Iraq. In this interview he said:

“By using loudspeakers they are instigating a psychological war on the Ashraf’s citizens. They repeat my name and say that my family have come there. I want to declare that anyone who has come to the gates of Ashraf and claims to be my family, have nothing to do with me and they are agents of the regime. They have been sent here by the Iranian intelligence. I have this before and say it again here, these people are the agents of the regime and we will not have any meetings with them now or in the future.

In his interview in 2010, he Leaves no doubt that he had complete knowledge of the presence of these people outside Camp Ashraf.

To justify his betrayal and recruitment by the MOIS, he claims that the PMOI –MEK did not inform him that his family had come to Camp Ashraf and deceived him that they were the agents of the MOIS. Now that he has realized he has been tricked, he has decided to leave PMOI –MEK ranks.

In May 2018, Gholam Ali Mirzai along with two others (Mousa Damroody and Azim Mishmast) went to the Iranian Embassy in Tirana and asked to be returned to in Iran. However, the regime’s embassy said that it would only facilitate their return on the condition of indulging in spying and smearing campaign against the PMOI –MEK. From then on, he along with Hassan Hayrani carried out the orders given to them. In addition, he was in contact with another MOIS agent, Ali Moradi.