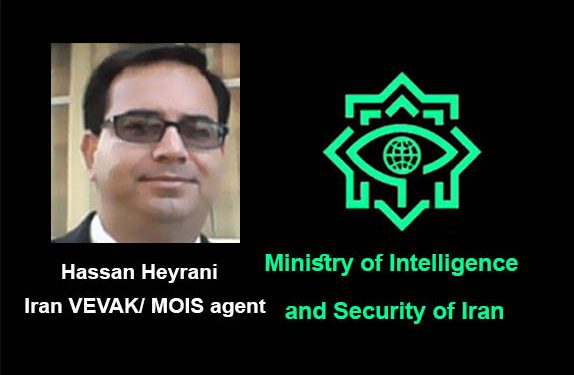 Hassan Heyrani, an agent of Iranian Regime’s Ministry of Intelligence, in Albania

Who is Hassan Heyrani: He is the coordinator of a network of agents of Iran’s intelligence service, working in Albania.

Hassan  Heyrani introduces himself under the title of  “former MEK memebr or separated memer”.  The Iranian regime is widely using this title as a cover up for its agents. In a press conference on October 23, 2019, the Albanian police chief exposed the Iranian regime’s espionage and terrorist network in Albania and its thwarted  operation to bomb a MEK Iranian New Year gathering in March 2018. The network with its drafted criminals of Turkish nationality was directed from inside Iran under comand of a terrorist Qods force officer nicknamed “Peyman”. To collect essential information for its plan on the MEK in ALbania, the Qods force deployed an Iranian national, Alireza Naghshzadeh , under the  title of “ former MEK member”. He frequented Albania  under guise of visiting his mother in Ashraf3.

After moving to Albania, the MEK’s security reservations about Heyrani increased and it was confirmed that he had established suspicious communications.

Finally, on April 19, 2018 the MEK decided to expel him. As the following document indicates, he acknowledged to his misconducts, but asked for financial assistance.

At the time of his expulsion, in the document below, he pledged not to have anything to do with the mullahs’ regime, adding that it would be considered betrayal if repeated. 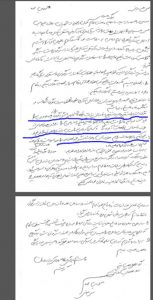 Subsequently, in order for him not to side with the Iranian regime, the MEK helped him with $ 2,500, for which he gave a receipt (document below):

I, Hassan Heyrani, received $ 2,500 for assistance from the Mojahedin Khalq Organization, and I am grateful for that.

Despite all the commitments he had made, it did not take long before Heyrani re-joined the Ministry of Intelligence and the Embassy of the Iranian regime in Albania.  Some of his activities during this period are as follows:

They returned at 4:30 in the afternoon and went back south to Tirana. He sent the Photos and videos to the Iranian Ministry of Intelligence, secret service (MOIS) on the same day. On August 15, 2019, he was also identified in the same car around Ashraf 3 taking photos and videos. 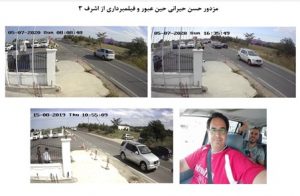 2- Another mission assigned to Heyrani is recruiting MEK dropouts living in Albania for the MOIS to use them for espionage, intelligence gathering and even terrorist activities. This is done by threatening or enticing them. One example is Rafiq Dehghan.  Hassan Heyrani promised him that he would get 300 Euros per month for him from the Iranian regime, if he would speak against the MEK in a TV interview.

In a witness statement, Rafiq Dehghan explains how Hassan  Heyrani approached him and made the offer to him. 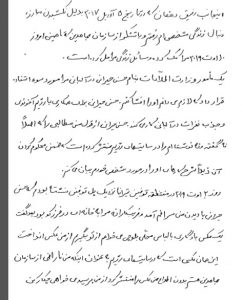 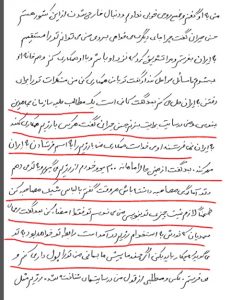 My name is Rafigh Dehghan and because I could not continue the struggle I went to live my personal life on Apr. 15, 2017. Thanks to the Mojahedin Organization that has helped me and has provided the needs in my life until today Aug. 10, 2019.

An agent of the Ministry of Intelligence (MOIS) called Hassan  Heyrani abused me and I see it necessary to expose him. Hassan  Heyrani is cooperating with the mullahs’ regime to recruit individuals in Albania. He has quoted me and has published some issues on the Iranian regime’s web site that I have never said or written them. I hereby condemn such act and I explain below what he has done about me:

On Aug. 2, 2019, I was sitting near the bridge in Tufine Neighborhood in Tirana that Hassan  Heyrani saw me and deceivingly took me to a house in Fresco Neighborhood. He said I want to take a picture with you in your local Baluchi outfit. He took a picture from me and that is the same picture that he published it in the Iranian regime’s web sites without my knowledge as a person dissenter of the Mojahedin Organization. He then asked me what I wanted to do. I said I am not in a good spiritual situation and I want to leave this country.

Hassan  told me why do you want to go to another country I can send you directly to Iran. He then encouraged me to stay with him and live in his house and cooperate with him in order to solve my problems. He said you cooperate with me and I will solve your problems in order to go to Iran. He then said you only have to write an article against the Mojahedin Organization and I will publish it in the web site.

Hassan  said anybody who does not cooperate with the regime cannot go to Iran. He wanted to gain my cooperation with the Iranian regime under the pretext of going back to Iran.

He said from now on I myself will get 300 Euros from the Iranian regime every month and give it to you and you have to be prepared for the interview. I will tell you when you must wear your best clothes and do the interview. By the way, you do not have to write anything I will write it for you. You only have to sign. He then said Rahman Mohammadian who has been employed by the Iranian regime will be the liaison with you and will tell you what to do. If you stay with us a few months, I will make you rich and then send you ]to Iran[.

Hassan  posted a photo and some writings on the web sites known for their links with Iranian regime including Iran Interlink that made me very furious since they were all shear lies. I had never said nor written those words. It was exactly contrary to the treatment I received from the Mojahedin Organization during this period.

Last year, Gholamreza Shekari who was also trying to lure me to cooperate with the ]Iranian regime[ I exposed him.

In order to cooperate with the Iranian regime, he told me I will tell you what to do next.

3- In July 2018, MOIS dispatched Mostafa Mohammadi, a notorious agent to Albania to start an Iranian regime’s demonizing program against the MEK, which in term it would lay the groundwork for the regime’s terrorist activities. It also commissioned Hassan Heyrani to support Mohammadi and facilitate his mission.

4- In 2018, the MOIS started an expensive demonization project against the MEK by sending “friendly journalists” in western media to Albania. Hassan Heyrani acted as the guide and the main subject. Under the guise of a “former member of the MEK”, he and other MOIS agents could cover up their collaboration with Tehran and justify their falsehoods. The German weekly Der Spiegel published an article written by one of Iranian regime’s “friendly journalists” who came to Albania and reported falsehoods of Heyrani and other MOIS agents in Tirana. The MEK sued Der Spiegel in Hamburg Court. On March 24, 2019, the Court ruled against Der Spiegel order it to remove the falsehoods or they would face heavy fine or go to prison.

5- The latest situation: In January 2020. The government of Albania expelled two Iranian diplomats, Mohammad Ali Arz Peyma and Ahmad Hosseini Alast, for terrorist activities. Consequently, the Iranian embassy in Tirana went under stricter security observation. As in other countries, the MOIS and the terrorist Quds force, control their recruited agents indirectly from Tehran or European countries. In Albania, the MOIS has organized its agents, identifying themselves as “former MEK members” under control of Hassan Heyrani and Gholamreza Shekari.

Through Hassan Heyrani, MOIS rented a coffee shop (Café Franck), In Tirana’s Fresco area to be used as a hangout and for coordinating the espionage activities.

The MOIS provides its agents in Albania with funds either by depositing money into intermediary accounts Albania that they get the chashed money to Heyrani and Shekari for distributing it among other agents.  The MOIS uses another method by sending money through family members directly from Iran. On numerous occasions, the MOIS in Iran has sent money to Gholamreza Shekari through his sister, Maria Shekari, also an agent of MOIS in the city of Kermanshah in Iran.

Hassan Heyrani and other MOIS agents are in contact with agents residing in other European countries to do a coordinated job of spreading misinformation, demonizing and lay the ground for terrorism.

Ehsan Bidi came to Albania with an Iranian passport under supervision of the Iranian regime to carry out a mission against MEK. He was detained and spent a year in the Albanian Karec closed camp, before he was deported from Albania. The MOIS assigned Hassan Heyrani to work closely with two local MOIS agents, Olsi Jazexhi and Gjergji Thanasi to prevent the expulsion of Ehsan Bidi.