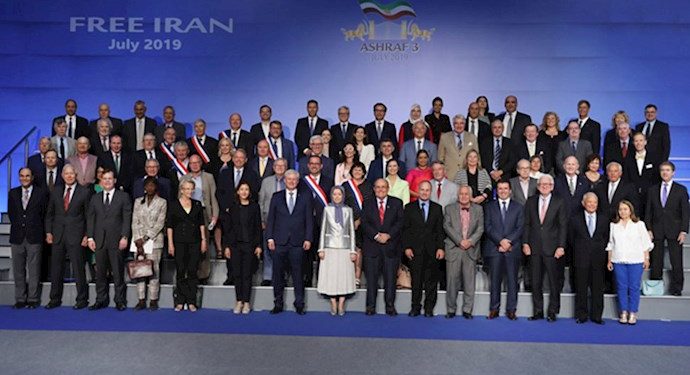 Renowned dignitaries from across the globe gathered in Ashraf 3

Albania, July 12, 2019 – Renowned dignitaries from across the globe gathered in Ashraf 3, home to members of the Iranian opposition group People’s Mojahedin Organization of Iran (PMOI/MEK), to attend a conference on over a century of the Iranian people’s struggle for freedom.

The speakers focused on the continuous protests across Iran and the MEK’s role in the unrest, the regime’s terrorism and cyber terror, human rights violations under the mullahs’ rule, the 1988 massacre of over 30,000 political prisoners consisting mostly of MEK members and supporters, and the MEK’s perseverance in Camp Ashraf and Camp Liberty under attacks in Iraq.

Prior to the conference, Mrs. Rajavi and the distinguished guests took part in a ceremony honoring the Iranian Resistance martyrs at the Memorial Wall in Ashraf 3.. 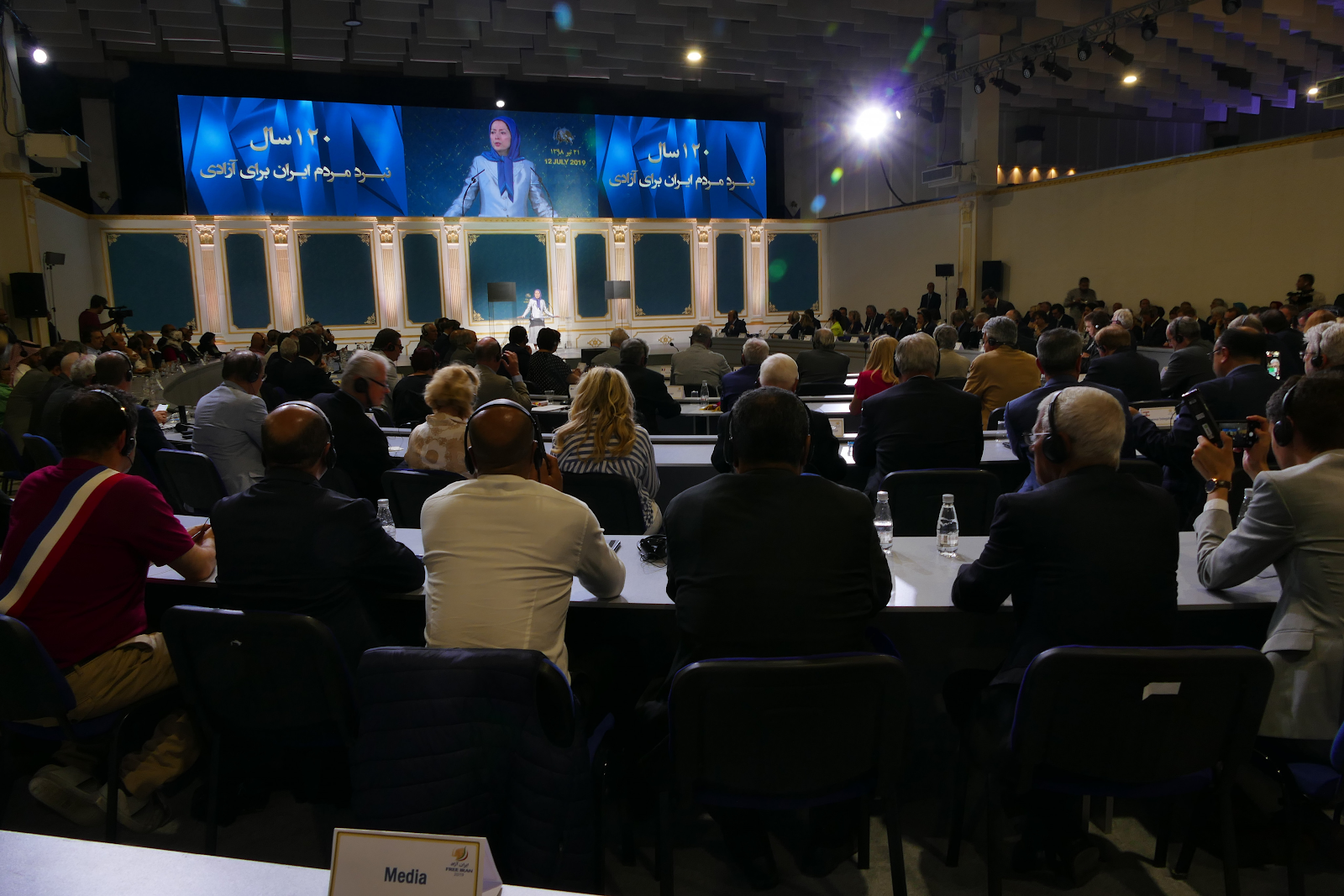 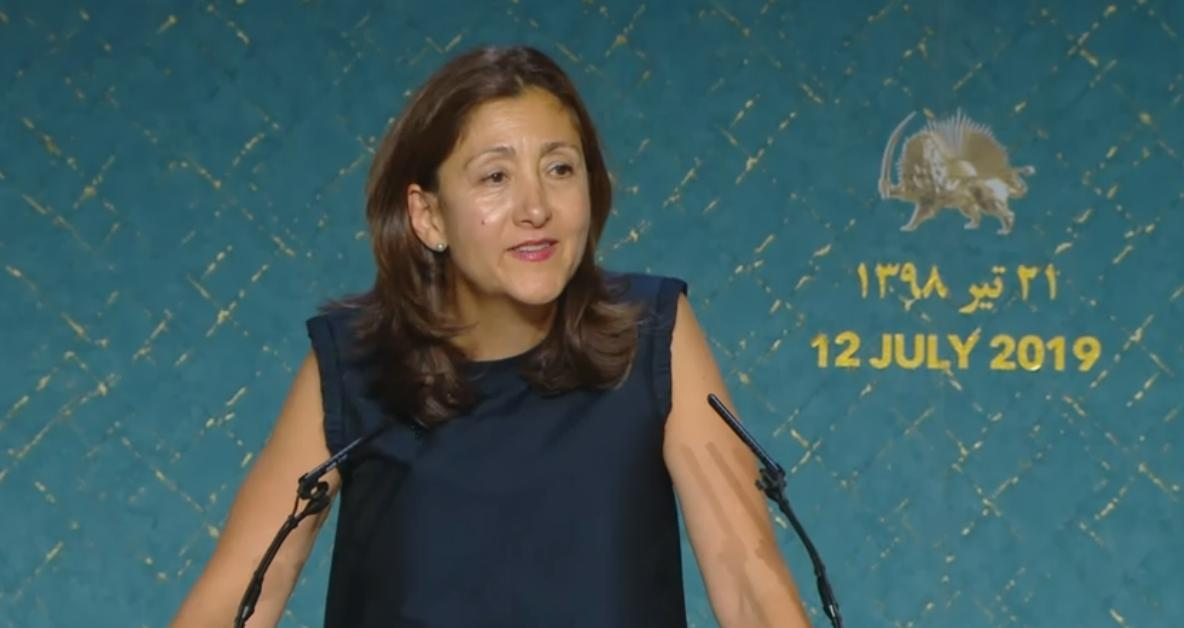 Sen. Betancourt delivering a speech at a conference in Ashraf 3 – Tirana, Albania – July 12, 2019

“I’m proud of what you have done so far and what you have achieved here in Ashraf 3, for the price you’ve paid and the sacrifices you have made and today it is bearing fruit… Now we are together in a moment in history that everything has changed,” she said.

With the help of so many dignitaries, Sen. Betancourt said, “We are making history today.”

“Your victory is our victory and we will be very soon with you in Tehran,” she concluded. 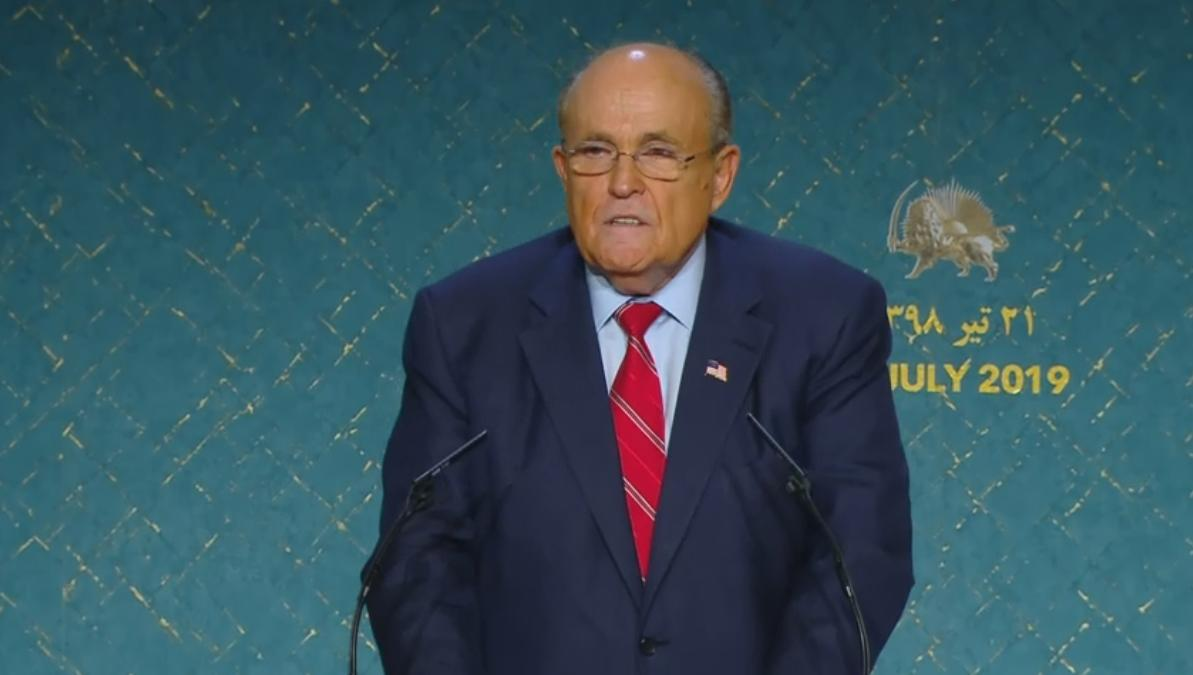 “I am very honored to be here and very moved by going through the really remarkable and shocking photographs,” Mayor Giuliani of the heroes and victims of the Iranian Resistance’s decades-long struggle for freedom and democracy.

Referring to the atrocities of the Iranian regime, Mayor Giuliani said that some of those people were murdered in less than a year ago.

“We have not been able to get the world, including the U.S., to show them how heroic and good this organization is… In the Arab Spring, we did not have a viable alternative for those countries,” he added. “But here that isn’t the case. How many Americans would not be moved by walking through that exhibition?”

“There is an alternative to theocracy and dictatorship [in Iran]. It is a government-in-exile and it gives us the confidence that if we help overthrow the Iranian regime, there will be prosperity and democracy in Iran.

“The Iranian regime threatens to murder people to the U.S. Last year they tried to bomb us here in Tirana. How do we get the message out that there is an organization that is a viable alternative to the Iranian regime?

“We have not got out this message as effective as we could, and this is our obligation.

“I thank Madame Rajavi to let me be part of this and this is something that I am proud of and probably my children will be proud of… I wish to have this meeting in Tehran before I die. 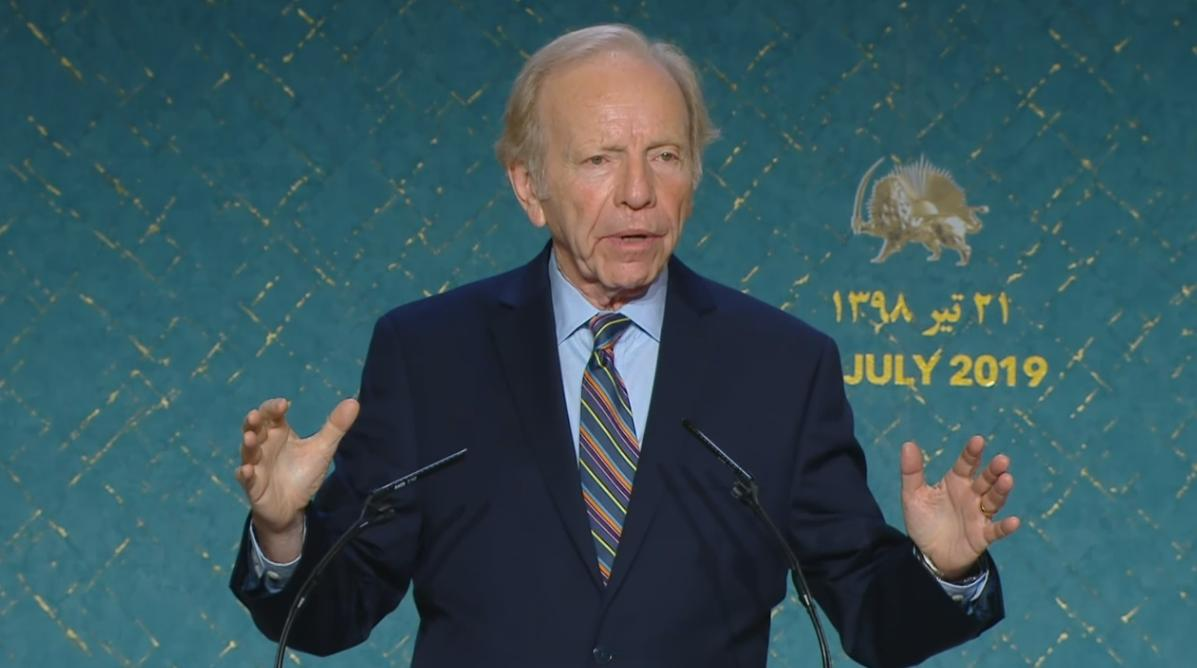 “Thank you very much, Mrs. Rajavi, residents of Ashraf and distinguished guests. My wife Hadatha is a child of survivors of the Nazi Holocaust in Germany and when she saw that exhibition she said that is an echo of the Holocaust,” Sen. Lieberman said.

“The MEK is about not letting that happen again what happened to the Jews in Nazi Germany… You in the NCRI have given us the opportunity to be true to our national principles. When I’m here I feel that I’m representing the spirit of my great friend, the late Sen. John McCain, who was warned by the establishment to stay away from this organization but he spent time learning about it. He came to Ashraf 3, believing in this organization and its cause.

“Ashraf 3 has become something magnificent. Coming here and seeing this magnificent community that you’ve built is miraculous. It teaches us lessons.

“With the kind of leadership that the MEK, Maryam Rajavi are giving and will give in Iran. With the support of people from around the world who are represented here and with the resistance of the Iranian people inside of Iran, we will have a meeting someday in Iran and come together and have a great party,” Sen. Lieberman concluded. 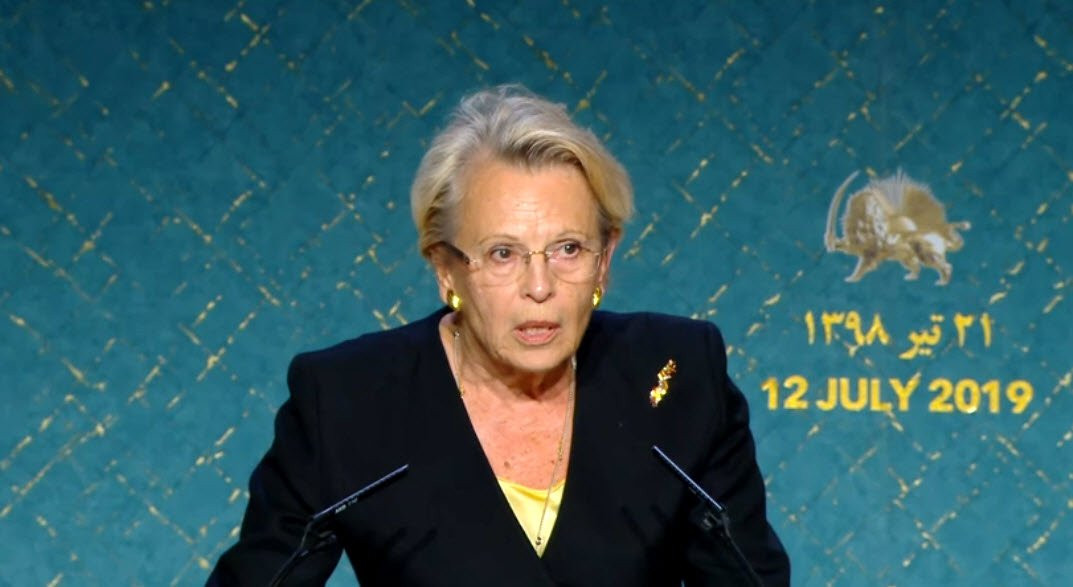 “I have to say that I’m very moved. What a contrast between the dramatic, horrifying images that we saw a few minutes ago. To be in contact with men and women who have given their lives for such a cause. To see what you have been able to achieve. You wish to give so much to the Iranian people,” MEP Alliot-Marie said.

“You have people who have been tortured yet you still pave the path for freedom. This visit to Ashrat 3 is very moving for us. “I have the privilege of being able to speak and think freely. Yet I also know that today this liberty is not available everywhere across the globe… We are also obliged to all people who are being subjugated to dictators around the world and in Iran. We are here today, Mrs. Rajavi, to tell you that you are not alone,” she added.

“We have to give the Iranian people courage and the help they need so they can get their future back,” MEP Alliot-Marie concluded. 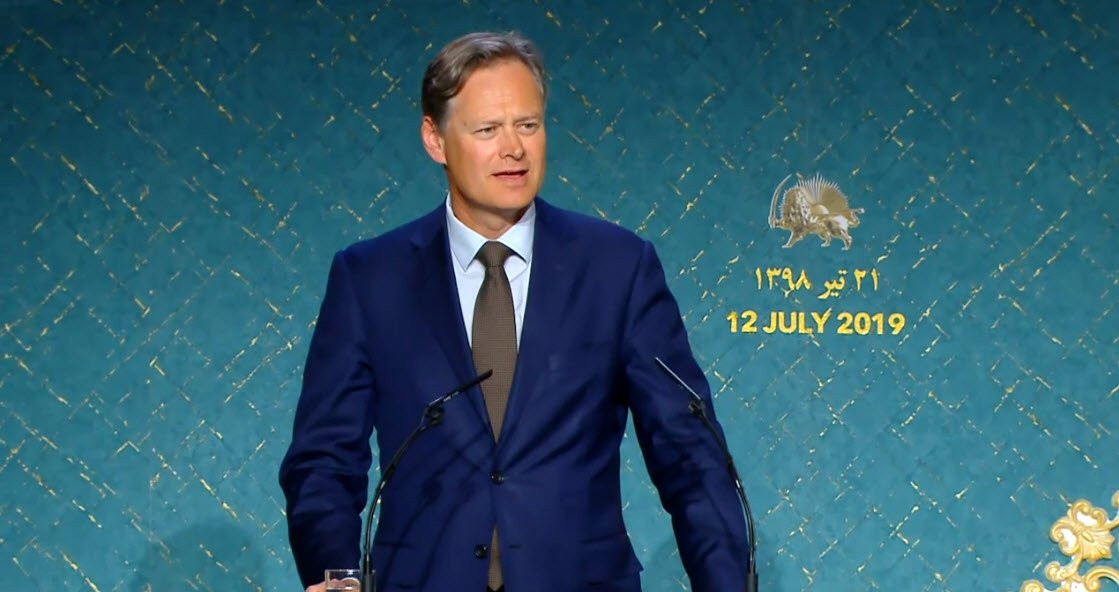 It’s a great pleasure to stand in before you today and contribute to the discussion on Iran. This is the second time I have the pleasure to visit you and this time I hope to learn more about you,” Mr. Offord said.

“You are the proof of a proud brave nation that will never succumb to the atrocities of the regime… We have always argued that decoupling the regime’s human rights violations from the nuclear deal was a mistake,” he added.

“We have been proven right that there is no moderate faction inside the Iranian regime… There are two issues that we continue to raise in our debates:

2- The U.K. government needs to blacklist the IRGC and all its subsidiary

“This measures will signal to the Iranian people that they are not forgotten and we stand with them… I call upon my government the EU countries to stop the appeasement policy,” Mr. Offord continued.

“We want to recognize the right by the Iranian people and the resistance led by Madame Rajavi to establish a democratic and free republic in Iran… We see a popular movement led by Madame Rajavi with support inside Iran. That message has not been put to the public in the west good enough,” he emphasized.

“Iran’s current regime is not a threat to the Iranian people alone, but to the peace around the world.

That’s why we support you in your struggle until Iran is free,” Mr. Offord concluded. An international conference focusing on the Iranian people’s 120-year-long struggle for freedom and democracy – Ashraf 3 – July 12, 2019 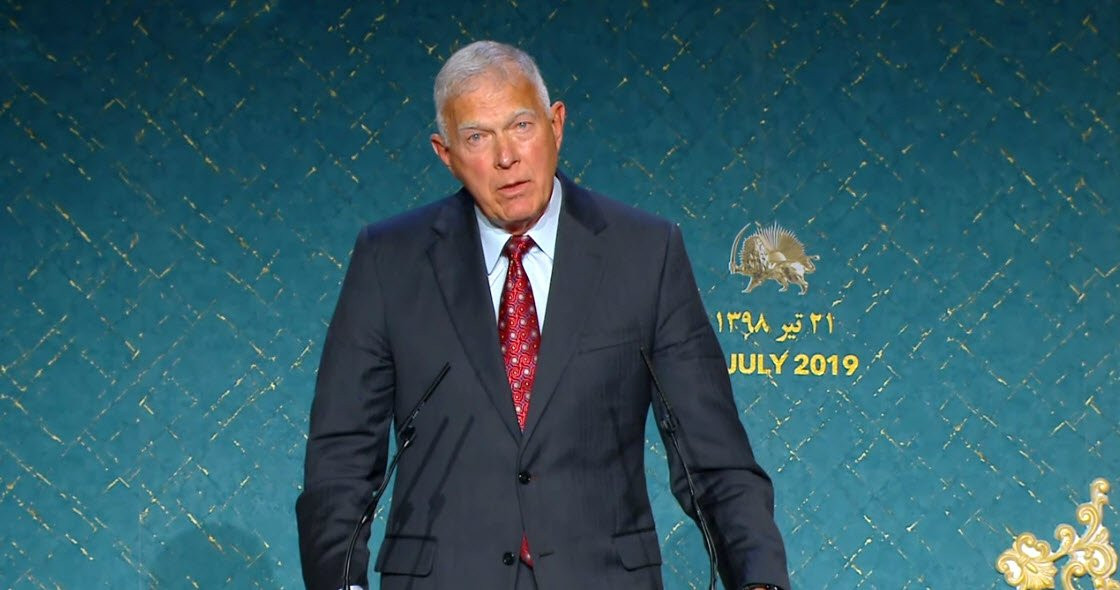 “I participated in a policy panel in Ashraf 3 and we were invited to dinner with the ladies of Ashraf 3. And some of them shared with me their stories of sacrifice and suffering. What I saw last night in terms of the ability to endure loss and yet move on was the sense of unit cohesion and dedication to each other was the same as you see in the military. The sense of mission and dedication to accomplish it,” General Conway said.

“I’m absolutely confident that with ladies, you will make your country free someday,” he added. “Welcome dear friends and distinguished guests. This exhibition that you see here is a small part of a larger picture of the sacrifice made throughout decades of struggle for freedom and democracy,” Ms. Parsaie said.

“The story of the supporters of Ashraf who helped rescue the PMOI/MEK members is the story of honorable people… Time has shown that you stand on the right side of history. The future will show more appreciation,” she added.

“Mayor Giuliani was correct that the solution to Iran is not appeasement but regime change. Throughout history, there are always tyrants and for a period they seem invincible. However, they all fall in the end. Always,” Ms. Parsaie concluded.

Int’l conference in Tirana: “Policy Options on Iran – A Viable Alternative in Ashraf-3”

European dignitaries voicing support for a “Free Iran” in Ashraf 3 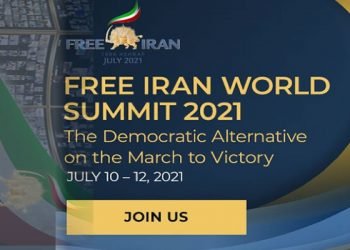 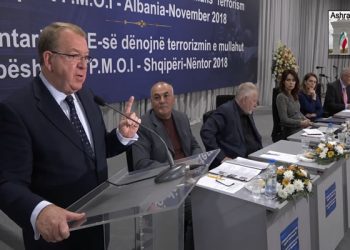 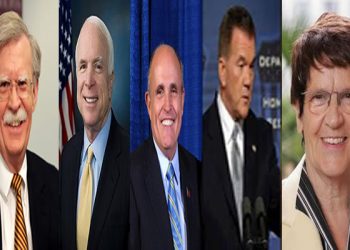