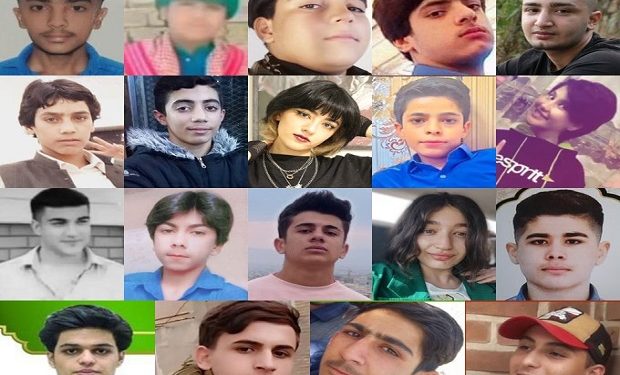 Two months have passed since the nationwide uprising of the Iranian people has started. So far, the uprising has spread to 219 cities and all provinces of Iran. The repressive regime has martyred more than 550 young people and arrested more than 30 thousand others.
we would like to mention another dimension of the Iranian uprising, quoted from Metro website in UK.

‘I prepare to die every time I leave the house’ – the teenage girls leading Iran’s revolution
In Iran’s capital city of Tehran, 18-year-old Raha is getting ready to leave her home.
However, unlike other teenage girls her age across the globe, who would be busy packing their bags for a busy day of school or college, Raha is leaving to fight – taking to the street with her friends to protest against Iran’s hardline theocracy.
Alongside thousands of others, she’s forming part of widespread demonstrations calling for ‘death to dictators’, Unsurprisingly, Raha admits to fearing what she may face every day, but she knows this battle for freedom is more important than feeling scared.
‘At first, we were afraid,’ she tells Metro.co.uk through a third party, who has direct contact with Iranian protestors. ‘I was scared I was going to be killed.
‘But I saw that thousands of young people have been killed for freedom. I told myself that my blood is no more colourful than the blood of other young girls, so I am choosing not to be silent through this government.’

Raha is just one of thousands of young people who are part of Iran’s Resistance Units – groups of trained and organised protestors looking to fight for a free Iran.
the morality police abuse their powers to unfair target and harass women – so it’s little surprise that it’s women and girls at the forefront of each demonstration.
It’s been nearly 60 days of civil unrest in Iran, with young female freedom fighters arguing this is no longer a protest against the government – it’s an all-out revolution. Despite attempts to suppress dissidents, there have been protests in all 31 provinces in Iran. Bazaars have shut out of support for protestors, truck drivers have declared strikes while university students, high school students are spilling out onto the streets daily to protest, even though they could face being beaten or shot by government forces.
‘The inflamed state of the country affected people from all walks of life,’ Raha explains. ‘When I heard about Mahsa being killed by this government, I was bursting with anger and I cried.
‘But I knew this was a problem that would not be solved by me crying, so I joined my friends in the streets to shout for freedom and democracy from this oppressive government.’ women and girls are at the forefront of every demonstration.
‘The government has billed us as troublemakers,’

Raha says: However, Raha and others in resistance units proceed with caution to prevent further bloodshed and arrest.
‘We prevent ourselves from being exposed, so we cover our face with clothes and we share responsibility during demonstrations,’ she explains.
‘One person monitors the surroundings so we can react to soldiers approaching and we’re not surprised. Believe me, every day when I leave the house, I leave in such a way that I must prepare that I may never come back home.
‘Fear is a major factor, but paying a price for freedom is a necessity of overthrowing the government.
‘My friends make me stronger because we are together but because my mother is afraid, she made promise I take care of myself. She said she couldn’t tolerate it if something happens to me. She said she’d have a stroke.’

Raha says she is inspired to continue by knowing she is standing side by side with other girls and women in their battle for freedom.
‘Women are at the forefront of these protests,’ she says. ‘Seeing the number of other young girls gives me strength.
‘My friend, who has the role of leader [of our resistance unit] says women are the force of change and the mullahs will be overthrown.
‘Women aren’t counted. But today’s oppressed are tomorrow’s conquerors. These words give us courage and we have no compromise with these mullahs.’

‘We feel very positive at seeing women in the resistance units actively organising protests,’ she explains. ‘The Iranian government are trying to dismiss this as women wanting more freedom and not wanting to wear a headscarf. But it’s about so much more than forced veiling. This is about 40 years of the violation of women’s rights and people are fed up.
‘Young people, especially young girls, are taking to the streets because they know under this regime, there is no future. There’s no point of them studying at school. They have fighting spirit and they’re risking their lives, so it’s important their voices are heard.’
Resistance Units, like the one Raha is part of, are supervised by the National Council of Resistance of Iran.