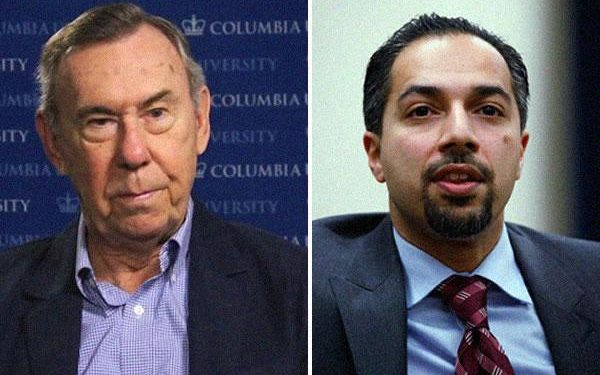 Inside the Pro-Iran ‘Echo Chamber’

The contents of the invite-only listserv, obtained by the Washington Free Beacon, could give a glimpse inside the “echo chamber” used by White House aide Ben Rhodes and allied lobbying groups to promote the administration’s nuclear deal with Iran.

Members of the list included an Obama White House adviser, senior officials at the State Department, journalists for the New York Times and the Washington Post, and fellows at prominent think tanks.

Since 2010, Gulf/2000’s operations have been funded by the Ploughshares Fund, a group that worked closely with the White House to promote the Iran nuclear deal.

In a New York Times articleearlier this month, President Obama’s foreign policy advisor Ben Rhodes said the Ploughshares Fund was part of the administration’s spin operation to sell the public on the agreement.

“We had test drives to know who was going to be able to carry our message effectively, and how to use outside groups like Ploughshares, the Iran Project and whomever else,” Rhodes said. “So we knew the tactics that worked.”

Gulf/2000 is still run out of Columbia University, where it is curated by Sick. Over the last two decades, Sick built the group into the predominant email list for Gulf State policy experts across the ideological spectrum.

The vast majority of posts on the forum are news articles, but occasionally members weigh in with their own comments. Posts are pre-approved by Sick or his assistants, and insiders say the forum is “dominated” by pro-Iran talking points.

One former member, who left Gulf/2000 several years ago because “90 percent of the traffic was either useless or promoting the official lines,” said the comments that were approved for posting seemed to follow an ideological slant.

“Gary [Sick] was the moderator, and the moderator is supposed to moderate,” said the former member. “And I learned after awhile, it was quite obvious, that Gary was filtering and navigating more toward his views of the world on all these issues.”

Sick said he was unable to discuss Gulf/2000 because he was traveling for the next few weeks. He declined to answer questions by email.

“Members of Gulf/2000 include activists and writers who worked closely with the Obama administration on Iran issues. One is Trita Parsi, head of the National Iranian American Council, a lobbying group working to repeal Iran sanctions.”

Gulf/2000 members said the forum posts, which are supposed to focus on Gulf State policy issues, often veer into defenses of the Iranian regime or conspiracy theories about Israel. Another member, speaking on background to the Washington Free Beacon, compared the group to a pro-Iran “info-op”—military jargon for a campaign to influence policy decisions.

“The most significant forum for scholars of Iranian studies to exchange ideas and views was dominated by apologists for the Iranian regime and was dominated by people who would reflexively push back on any argument that the Iranian regime was involved in what we would call ‘malign activities’ or ‘illicit activities,’” said the member, who added that the majority of his colleagues who work on Gulf issues belong to the forum.

The Ploughshares Fund said it finances Gulf/2000 in order to “inform the debate over Iran’s nuclear program in the media and among policymakers by assessing and reporting on events, generating viable solutions and refuting false stories,” according to its annual reports. The foundation has given the email list $75,000 a year since 2010.

Gulf/2000 is linked to a larger messaging effort on the Iran deal that has been reported on by the Free Beacon and other outlets.

In October 2014, the Free Beacon published audio recordingsfrom a since-discontinued strategy meeting between the White House and activist groups lobbying for the nuclear deal. During the session, Rhodes stressed that the agreement was “the biggest thing President Obama will do in his second term on foreign policy.”

Last summer, the Free Beacon posted tapesfrom a private conference call with progressive groups organized by the Ploughshares Fund that discussed how to sell the Iran deal to congressional Democrats.

Republicans on the House Oversight Committee are calling on Rhodes to testify about his comments to the Times, which seemed to suggest the administration misled the public and created an “echo chamber” in order to get the deal through.

Members of Gulf/2000 include activists and writers who worked closely with the Obama administration on Iran issues. One is Trita Parsi, head of the National Iranian American Council, a lobbying group working to repeal Iran sanctions. Another is Al-Monitor reporter Laura Rozen, who a White House aide described as her “RSS feed” on Iran in the Times article. Cirincione is also on the list.

Many of the email list’s regular contributors are bloggers and academics: Jim Lobe and Marsha Cohen, writers for the anti-Israel website LobeLog; Flynt and Hillary Leverett, authors of the book “Going to Tehran: Why the United States Must Come to Terms with the Islamic Republic of Iran”; Truthout writer Gareth Porter; andCyrus Safdari, a commentator at Iran Review.Gulf/2000 also includes a number of current and former Iranian scholars who work at state-controlled universities or think tanks.

The Free Beacon reviewed hundreds of posts sent to the listserv between 2010 and 2015. Many contain theories about the “Israel Lobby’s” destructive influence over U.S. foreign policy and politicians, defenses of the Iranian government, and comments downplaying news stories that cast the regime in a negative light.

Although some Gulf/2000 members are strong critics of the Iranian government, particularly on human rights, many of the most active posters are vocal defenders of the regime.

“Perhaps above all, one of the greatest benefits of this [Iran] deal has been to put some limits, at least for the time being, on the Israeli Lobby and their rightwing supporters in the Congress,” wrote Farhang Jahanpour, a former dean at a state-run Iranian university, in 2013.

Other posts talked about the necessity of “breaking the power of the domestic Israel lobby” and the “neo-con cabal” that were allegedly the main threats to the Iran deal.

“The Neo-Cons have convinced themselves that no costs of human life outweigh the moral benefits they see of ridding Israel of any perceived military threat by pre-active lethal military force,” wrote David Long in January 2013.

The forum is also littered with conspiracy theories about the Israeli government and foreign affairs. In one post, retired journalist Richard Sale claimed the CIA told him that pro-Israel Christian groups were “secretly funded by Mossad.”In another,Soraya Sepahpour-Ulrich speculated that the Iranian-backed bombing of the 1994 AMIA Jewish community center was actually a false flag operation by the Argentine government to cover up its complicity with the Nazis.

Although Gulf/2000 is ostensibly a forum to discuss Gulf policy issues, the listserv’s fixation with “neocons” and the “Israel lobby” is not new. In 2003, a Lebanese columnist named Jihad Al Khazen published a series of lengthy posts on Gulf/2000 that purported to tell the “Biographies of the Neo-Cons.” His subjects included Bill Kristol, Douglas Feith, Michael Ledeen, and Robert Kagan.

At the time, members also debated the correlation between “neo-cons” and Jews.

Occasionally a contributor would push back on the forum’s general consensus.

“I am puzzled by the consistent tone of dismissal of any allegations of wrongdoing on the part of Iran by members of this list,” wrote one poster in 2003. “These charges are lumped together as either the baseless allegations of the US government, or worse, the product of a secret Jewish-neocon plot to discredit an Iran which would never, ever participate in terrorism.”

But a former forum member said Sick would often cut off conversations as “off-topic” when commenters tried to defend Israel against charges.

On March 5, 2014, the day the Israeli military announced it had intercepted an Iranian shipment of advanced rockets to Gaza, the news was greeted with typical suspicion in the forum.

“Call me a cynic, but it does seem like amazingly fortuitous timing: just when the IAEA have resisted Israel’s call to publish the claims (probably) Israel leaked, and while Bibi is tub-thumping to AIPAC in Washington ,” wrote James Spencer, a blogger for LobeLog.

“[S]omething did not jibe with this story. It is just a little bit too convenient,” agreed another poster.

“As James Spencer and Walter Posch noted the timing is suspicious, occurring as the AIPAC conference convened with Netanyahu in Washington,” wrote Charles Smith, a professor at the University of Arizona.

When the Iranian government weighed in on the arms seizure the day after the story broke, its response was similar.

Another common refrain in posts is that there is no evidence Iran is pursuing nuclear weapons.

“Like other counter-factual mythologies (President Obama’s birthplace, the identity of the Kennedy assassin, Jimmy Hoffa’s killer), this one seemingly will never die–at least as long as the neo-cons are alive to fan the last of its faint sparks,” wrote William O. Beeman, an anthropology professor at the University of Minnesota.

An official at an Iranian university, whose name was withheld, claimed the notion that Iran was seeking a bomb was driven by “Iranophobia.”

“Iran repeatedly has said that it doesn’t pursue the way of reaching to Atomic bomb,” said the poster. “What makes the US doesn’t believe this is exactly rooted to what Mr. Aboutalebi described it in his interview as Iranophobia.”

Posts also defend Iran against allegations of human rights violations by suggesting the claims are intended to undermine moderates or denying the charges altogether.

“[A]s the nuclear issue has become effectively – for now – insulated due to the support of Khamenei, critics are seeking to undermine Rouhani through other issues,” wrote Parsi in March 2014. “Human rights – due to the impact it has on Rouhani’s external image and the impact that can have on negotiations – appears to be one such issue.”

Other commenters were less subtle than Parsi.

“The Leveretts said it best: Ahmadinejad won those elections; get over it already,” argued blogger Safdari in December 2013.

One former member expressed concern that the influential listserv was being used to whitewash the Iranian government.

“If the Iranian regime wanted to push back on any assertion against it … it could not do a better job itself than the American academics and pundits who do it on Gulf/2000,” he said.

details on Iran’s terror attempt against MEK members in Albania