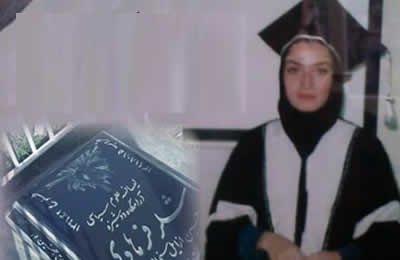 In early January 2013, a 25-year-old woman, Shiler Farhadi, a graduate of political sciences from Kermanshah’s Razi University, ended her own life by her father’s hunting rifle.
Shiler Farhadi was first arrested apparently for signing a petition along with other students at Razi University in Kermanshah, criticizing Khamenei’s visit to the city on 16 October 2011.
NCRI’s Women Committee reports Shiler Farhadi was from the renowned Sanjabi tribe famous for their courage. She practiced martial arts and was preparing to pursue her master’s degree when she disappeared in the autumn of 2011.
Five months later, her family found her in extremely weak physical conditions and poor psychological health in the Intelligence Ministry’s detention centre at Evin Prison and returned her home in Kermanshah. She was instructed to report in whenever she was summoned by the Intelligence Ministry.
It is not clear what this girl went through in detention of the Ministry of Intelligence. However, she suffered unstable psychological conditions for weeks after returning home. She was afraid of everyone and never left the house. She didn’t speak to anyone for months.
Ten months after she was freed, Kermanshah’s Intelligence Department summoned Shiler, but as soon as she found out about this, she fetched her father’s hunting rifle and terminated her life.
Three years past her death, it still remains unclear what happened to Shiler in detention that ultimately led to her demise.

Iran- terrorism: How does Iran build its terror networks throughout Latin America?