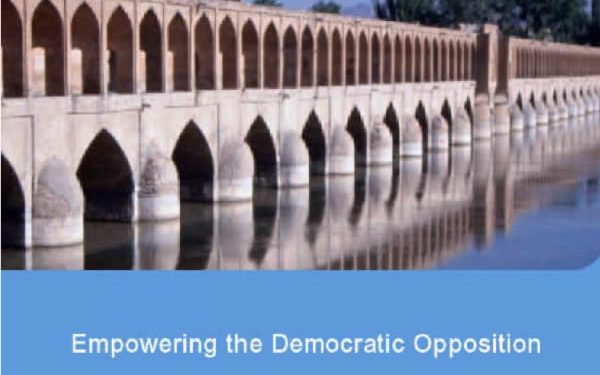 A New Approach to US Iran Policy:
A Response to the Failure of Engagement
Prepared by DLA Piper US LLP, November 2006

Many Americans today are understandably concerned over the increasing power of the fundamentalist Islamic Republic of Iran and the rapidly growing threat that it poses to the United States’ security interests. Especially disturbing are the regime’s efforts to acquire nuclear weapons technology while it acts as the leading state sponsor of global terrorism. This concern has been underscored in recent months by Iranian president Mahmoud Ahmadinejad, whose rhetoric has increased the level of tension throughout
the region. In that context, DLA Piper was retained by a concerned Iranian American to objectively
examine the threat that Iran poses to the United States and to evaluate various policy alternatives for a prospective response. This report takes on particular relevance in the aftermath of the 2006 Congressional elections as decision-makers grapple with the question of Iraq policy. A relevant question in the debate centers on the role of Iran’s expanding influence over affairs in Iraq and the short- and long-term consequences of Tehran’s projection of Islamic fundamentalist power in Iraq and throughout the region.
Our conclusion is that the two most frequently cited options for addressing the Iranian threat – direct military confrontation and continued “soft” engagement – are untenable and will offer no effective solutions.
We believe, as do many others, that a response which has significant potential is the adoption of a policy of regime change through active support for organizations that advocate for democracy in Iran. There are a number of these organizations but one of the groups is the Mujahedin-e Khalq (MEK), an organization currently listed by the United States, United Kingdom, and European Union as a Foreign Terrorist Organization (FTO), and currently located primarily at Camp Ashref, Iraq. Belief in the MEK and its goals has attracted a substantial body of informed opinion and international support. Indeed, since the MEK was first designated an FTO in October 1997, the public support for removing it from the list has been widespread,
including a non-partisan group of 220 members of the US Congress, 331 members of Parliament and 122 members of the House of Lords in the United Kingdom, and many European Union parliamentarians, as well as Iraqi officials and members of the US military forces in Iraq. As a result of the contradiction between the MEK’s designation as an FTO and the strong international support it has attracted, we were also asked to
compile and analyze publicly available materials and to assess whether the designation is valid and should be maintained.
In the course of our review, we have examined a wide range of documentary sources. These sources include print media, reports by major foreign policy think tanks and NGOs, statements by US and foreign government officials, and comments by US military personnel in Iraq. Based on this review, we have prepared a detailed report which analyzes the situation based on the historical record.
As a result of our analysis, we believe there are ample grounds to conclude that the MEK and a broader coalition of organizations of which the MEK is a part, the National Council of Resistance of Iran (NCRI), should be removed from the US list of Foreign Terrorist Organizations. Because the pace of events is so dynamic in the region, we will continue to update this report as developments warrant.

The Hoax Exposed – Complicity in crime against humanity