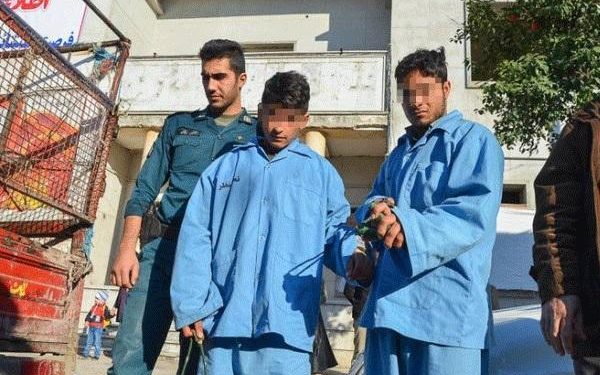 Boys under age of 18 paraded in public as punishment

In an inhuman and degrading manner, the Iranian regime’s State Security Forces (police) paraded two boys under the age of 18 in the streets in the northern city of Sari as punishment for an alleged crime.

The children were forced to wear adult-size prisoners’ clothing and were paraded in the city center with their hands tied and a text on their clothes reading: ’Under supervision.’

State-run news outlets reporting the incident claimed the two boys had broken the windows of some luxury shops using slingshots.

The boys who were from poverty stricken families made their living by searching through trash cans for broken items to sell for petty earnings.

The humiliating and inhuman punishment of parading offenders in crowded streets has become a routine in Iran, often immediately after the suspects are arrested, even before being officially charged or taken to a court.

“For years, the Iranian regime carried out such degrading treatment against adults, and now during Rouhani’s tenure this has been taken to a new level and includes children. One has to bear in mind that execution of ‘juvenile offenders’ has been a trademark of the theocracy ruling Iran, and on January 29, the UN Committee on the Rights of the Child issued a scathing report on how the clerical regime mistreats children, in particular young girls”, said Shahin Gobadi of the National Council of Resistance of Iran (NCRI).

This is one of the few time that the images of the degrading punishment being carried out against minors are being published in state-run media.