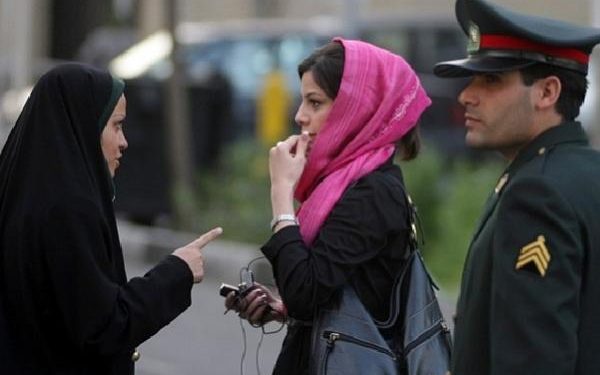 Police warning a woman for mal-veiling

Amnesty International in its annual report for the year 2015 described executions in Iran as “widespread” and referred to cases of this sentence carried out for juveniles and executions in public.

In 2015 Iranian officials continued to impose severe restrictions on freedom of expression and assembly, according to this human rights organization.

This organization also criticized filtering in Iran and referred to many cases of arrests for Internet activities.

In the meantime, Amnesty International says the new law in Iran, including electronic registration of detained individuals, provides various supports for these individuals, yet emphasized this new law has no impact on “torture” in Iran; and this law does not provide detainees the right to have access to a lawyer from the moment of their arrest. Amnesty International says this law does not place Iran under the framework of international laws and standards.

Amnesty criticized the presence of packed prisons with poor hygiene conditions, including Diesel Abad in Kermanshah, Adel Abad in Shiraz, Gharchak Varamin near Tehran and Vakeel Abad in Mashhad.

This report goes on to accuse courts in Iran of issuing rulings that according to this organization fail to prevent torture and other inhumane measures.

Amnesty’s report also refers to sentences of amputation, blinding, or qisas (retribution in kind) in public.

Neglecting the rights of women, ethnic minorities, unjust courts and creating limitations for various religious and conscience groups are other cases Amnesty has raised in its annual report.

“Women remained subject to discrimination under the law, particularly criminal and family law, and in practice. Women and girls also faced new challenges to their sexual and reproductive health and rights. Parliament debated several draft laws that would further erode women’s rights, Including the Bill to Increase Fertility Rates and Prevent Population Decline, which would block access to information about contraception and outlaw voluntary sterilization. The general principles of another draft law, the Comprehensive Population and Exaltation of Family Bill, were assed in Parliament on 2 November. If enacted, the law would require all private and public entities to prioritize, in sequence, men with children, married men without children and married women with children when recruiting staff. The law also risks further entrenching domestic violence as a private “family matter”. In practice, women continued to have reduced access to affordable modern contraception as the authorities failed to restore the budget of the state family planning programme cut in 2012.  Women and girls remained inadequately protected against sexual and other violence, including early and forced marriage. The authorities failed to adopt laws criminalizing these and other abuses, such as marital rape and domestic violence. Compulsory “veiling” (hijab) laws also continued to empower police and paramilitary forces to target women for harassment, violence and imprisonment. The authorities came under local and international pressure to allow women access as spectators to international men’s volleyball matches in Tehran’s Azadi Stadium but continued to exclude them in the face of opposition from ultra-conservative groups, such as Ansar Hezbollah.”