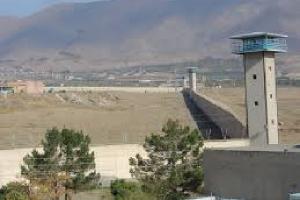 I am a political prisoner who has endured time behind bars back in the 1980s and is now condemned to 5½ years in prison. To this day I have spent three years behind bars. My younger sister, Maryam, has been condemned to 15 years in prison and she was thrown behind bars along with her three children, with one being less than 14 months old. She has been in prison for six years now.
On September 18th, 1981 my brother, Alireza, was executed by a firing squad without ever being taken to court or given any chance to defend himself. Afterwards in 1985 my other brother, Gholam-reza, was suddenly executed also by a firing squad despite the fact that he had spent 2 years in prison. In August 1988 during the massacre of thousands of political prisoners in Iran my younger sister, Roghie, and my even younger brother, Abdulreza, were both hanged for supporting the People’s Mojahedin Organization of Iran and selling this organization’s daily newspaper. Both of them were in prison for seven years while being only sentenced to three, meaning they spent 4 years behind bars in addition to their sentencing.
You should also know that we were not even allowed to visit our loved one’s grave sites. Even a number of close friends and relatives who came to our house to express their condolences were arrested and sent to prison. My grieving mother was also taken to prison where she spent a few months behind bars. She then suffered a brain stroke and lost her life due to all this pressure.
In all these years full of crimes, this very Hassan Rouhani has been one of the main officials involved in all this cruelty and hardship. For a decade he was the secretary of the regime’s Supreme National Security Council. All these matters had taken place under his watch and he played a direct role in all these issues. This is exactly why to this day this regime has been condemned more than 62 times in the United Nations General Assembly and the Human Rights Council for its gross human rights violations.
Truly, should I or any other freedom-loving individual not be surprised of the fact that you will be meeting with this individual and have allowed him to enter France? It is very unfortunate. Especially at a time that you are informed of the 2,000 executions under Rouhani’s tenure, and the scope of killings reaching to such a high extent in Syria, Yemen and Iraq…
As a political prisoner and a brother who has lost his sister and brothers to ruthless firing squads, gallows and massacres, I am asking you truly, who are you meeting with, and what crimes are you actually legitimizing? And in the name of France!