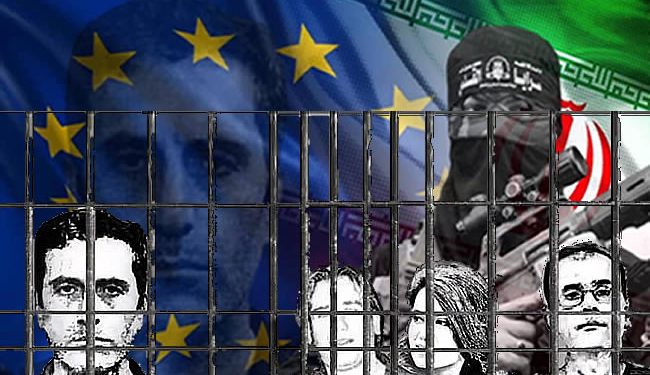 Iran is blackmailing about its convicted diplomat in a Belgian court

The Iranian regime, infamous for its terror, threats, and blackmail, after making failing to guarantee the release of its “diplomat terrorist” Assadollah Assadi, tried to threaten and blackmail the European governments, especially Belgium.

‘Immunity’ is not for terrorists, the second failed step

After this scandalous threat, the regime tried to misuse international law for this terrorist act and its agent. Since the credible documents and the terrorists were all caught by the justice, it was not possible to deny the basis of the case.

The scandal was so great that Ali Majedi, the ambassador of the regime in Germany at the time of the arrest of Assadollah Assadi, the diplomat-terrorist of the regime, later admitted that the evidence was so large that it was impossible for him to escape.

In a speech published by the ISNA news agency on January 23, 2019, he said: “The Europeans have provided evidence of the allegations they have made that we cannot easily refute.”

So, the regime was forced to claim that the arrested terrorist was an official ‘diplomat’ of the regime’s government and that under the 1961 Vienna Convention he had “diplomatic immunity and should not be dealt with”.

In the world of diplomacy accustomed to the mullahs, which was based on appeasement and bargaining, many such issues were ‘resolved’ in secret conversations.

As we have seen in many cases of regime assassinations and crimes during the years of the mullahs’ rule, every time a crime was committed, such as the assassination of the great human rights defender Professor Kazem Rajavi, mercenaries and assassins were returned to the regime with the least possible media reaction. But this time the trick did not work, and the court officially rejected it.

Belgian diplomat hostage-taking plot: After the conviction of Assadollah Assadi, the terrorist diplomat of the Iranian government, in the court of Antwerp, Belgium, the regime’s state media reacted very frustrated on it. The state-run daily Siasat-e-Rooz, which is affiliated with Iran regime’s supreme Ali Khamenei, in a panicked response, called for retaliation against the Belgian government.

“One Belgian diplomat could be arrested on charges of espionage or any other charge,” the state-run newspaper Siasat-e-Rooz wrote.

An Antwerp court sentenced Assadollah Assadi, a terrorist diplomat from the Iranian government, to 20 years in prison after two years of judicial work and investigation. Three of Assadi’s accomplices were also sentenced to 18 years, 17 years and 15 years in prison.

Unsuccessful deal behind the curtains

The Iranian government’s Foreign Ministry has made many efforts over the past two years in order to prevent this court by colluding and dealing with the governments of Germany and Belgium. When the Iranian Foreign Minister Mohammad Javad Zarif was questioned, why he had not taken steps to prevent such a verdict, he noted, “There is a lot of work that has been done that cannot be said.”

In a frightening and fiery reaction to the great disgrace that has befallen the whole government, this state-run daily has suggested retaliation.

Siasat-e-Rooz added: “It is expected that our country’s diplomatic apparatus will expel their diplomats in the least action against the Belgian government until Mr. Assadi’s task is clarified. Of course, a Belgian diplomat can be arrested on espionage charges or any other charge.”