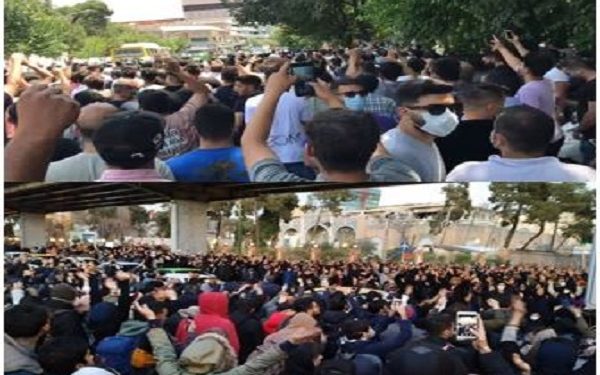 Nuclear talks between the Iranian regime and five other countries are still ongoing, and although some are talking about its final days, no end has been made yet. In recent weeks, officials from various countries have spoken about the talks and their intention to determine their final task. Khamenei, meanwhile, showed up on February 8 and tried to overstate his power. He said, “Today, the United States is being hit from a place that it never calculated.” Khamenei, however, did not make clear what the blow was and where it came from. He only argued that the two US presidents are weakening themselves.

Evidently, Khamenei is working hard to sort out the chaotic situation of his government and to keep his declining forces. However, that is not the whole issue. It is a matter of Khamenei’s extreme weakness and inability that while many observers speak of the final stages of the negotiations, he is unable to take a firm stand and speaks in a double standard. Whether Khamenei accepts the conditions imposed on him and withdraws from his former claims, or if he does not back down and intensifies his nuclear activities, he will face serious consequences in both cases.

The majority of observers now realize that the regime is far weaker than ever. Placing Ibrahim Raisi on the presidency is not from a position of power but from Khamenei’s position of compulsion in the face of the protests and uprisings of the Iranian people. On one hand, a spokesman for Raisi’s administration said on February 8 that “a good agreement, ( for nuclear talks), is available and the government is determined to reach a sure result”, but on the other hand, a spokesman for the Ministry of Foreign Affairs thinks differently and said the day before “lifting the sanctions” Are vital and our red line »

The deeper roots of this duplicity and the extreme helplessness of the Supreme Leader, however, needs to be sought in the socio-economic crises that have gripped the regime from all sides.

A few days earlier, Shariatmadari, a close aid to Khamenei, and the chief editor of Kayhan newspaper, showed his resentment towards foreign minister and secretary of the Supreme Security Council, calling their support for direct talks with the United States ” walking behind a delusion “.”Isn’t your insistence on direct negotiations with the United States the plunging into the quagmire they have prepared for us?” he said in a wrath. Shariatmadari went on to emphasis that he was not alone and “quite a large number of regime’s affiliates are concerned about this”.

This is Khamenei’s stalemate, which is evident in the ambiguity and inability to determine the status of the nuclear talks. With or without JCPOA, Khamenei and other ayatollahs in Tehran, have no way out the crisis and the “quagmire” Shariatmadari is referring to. No matter which direction they choose, the disintegrating problems insist, shaking the pillars of ayatollahs’ rule.

Iran: Khamenei Admits His Regime Is Riddled with Crises

Corruption in Iran Spiraling Out of Control

Timeline of NCRI’s Revelations To Prevent a Nuclear-armed Iran