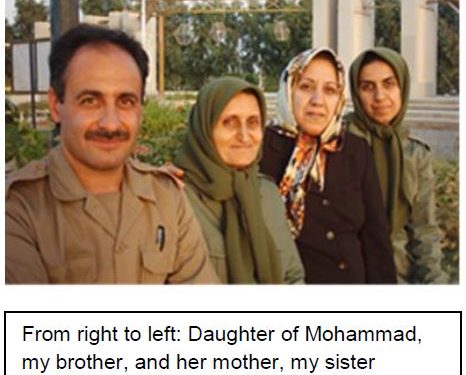 I was the youngest child in my family. As an opponent to the dictatorship in Iran, my brother, Ali, was arrested by the Shah’s Secrete Police (SAVAK) and sentenced to five years in jail, but he was released after spending two years due to the 1979 revolution in Iran.

After Khomeini came to power his club wielders abducted my youngest sister, Laya, 18, while she was campaigning for the People’s Mojahedin Organization of Iran (PMOI) and distributing publications. She was incarcerated for five years without any definite accusation!
My other brother, Ali-Asghar, was arrested and sentenced to two years in jail. However he languished for four long years in prison.

As Khomeini escalated the suppression and killing of the Iranian people, my brother, Ali, was murdered by his notorious Revolutionary Guards (IRGC). Then, my sister, Kobra, and my brother, Hamid, were arrested, leaving their families devastated. My older brother, Mohammad, a teacher in Tabriz, became a fugitive and was forced into hiding. The pressure of events led to my father suffering a heart attack and he unfortunately passed away. Therefore, in less than one year, due to the ominous rule of Khomeini – now known as the Godfather of the ISIS – my family was literally vanished. Over those years, our house was the target of numerous attacks and looting by the ruthless IRGC. Amid the events, just for a few months after 1981, one of our neighbors, after each attack, used to come furtively through the back yard’s window to visit and comfort us. His name was Ghasem Taghdareh. He was a PMOI supporter despite the fact that his father was the commander of the local Islamic revolutionary committee. To scare Ghasem and make him repent, his father surrendered him to the regime’s security forces and after sometime in the spring of 1982 he was placed before the firing squad. Due to his perseverance on his ideals, he was sentence to death and the decree was cruelly carried on right away. His sister was hanged, too, during the massacre of the political prisoners in 1988.
Under the pretext of defending Islam, Khomeini waged war against Iraq, and to cloak the suppression of the people who demanded freedom he resorted to sending youths to the warfronts against Iraq, while executing his opponents under the banner of waging war against the God. Under the influence of these events, I decided to end my silence. My first step was starting activities against anti-patriot war against Iraq and supporting the peace plan proposed by the National Council of Resistance of Iran (NCRI) against Khomeini beating on the drums of war. My support and propaganda on behalf of the PMOI continued until I was arrested in 1986 and transferred to Tehran’s notorious Evin Prison. I was sentenced to four-year in jail through a short process that lasted a mere three minutes.

In 1987, my brother, Ali- Asghar, was arrested again and sentenced to jail. In 1988, Khomeini’s henchmen carried out a cruel massacre and executer more than 32.000 political prisoners in a few weeks, in an effort to revenge the blows they received from the PMOI. After about four years, as a result of the PMOI’s revelation, a few of prisoners and I were rescued from the carnage.
After being released from prison I came under more pressure from the religious Gestapo. After each connection with my sisters who were abroad, inevitably, they summoned me and I was under interrogating and threats, with closed eyes, to make me collaborate and give them information on various people. They sought this information for their terrorist operations. Finally the PMOI had me transferred from Iran to Ashraf in 1995 and of course saved my life.
In October 2003 I asked my relatives to come to Ashraf and visit me and the other members of our family. However, all of my relatives were arrested as they came back to Iran. Two of my brothers, Hamid and Ali Asghar, each were sentenced to two years in jail and my sister Kobra, to five years behind bars. My older brother and his wife were arrested and sentenced to five years in jail.

There wasn’t even any mercy for my 80-year old mother, Fatimah, and she was arrested along with my sister while legally traveling from Tehran to visit me at Camp Ashraf for the second time. My sister was placed under harsh torture and lost the vision in one of her eyes after being lashed with electric cables by Evin torturers. Their ‘sin’ was visiting their relatives.
Over the years that I have been in Iraq, each time that I phoned my family, they became subjects of intense pressures, threats and harsh interrogations. They were asked, by abusing the family emotion, to make us defect our goals for freedom and democracy in Iran, and yield to the religious fascism and retune to Iran.
The next step is joining the religious Gestapo and standing against the nationwide resistance for democracy in Iran. Demonization and proscribing the resistance against dictatorship, and the freedom fighters have been constantly tracked by all the felons all through the history of nations, and the mischievous mullah’s regime, that is the Godfather of ISIS, is not an exception. At the time, by dispatching its agents to Camp Liberty, under the ploy of family visits, the Iranian regime has no objective other than demonizing the Iranian Resistance, making it to give up and finally, terminate it by any possible gears.

Is it the deduction of the humanitarian principals and the human rights tenets that the victims are asked to yield to theexecutioner!? Isn’t if for overlooking the mullah’s crimes, so that they can confidently carry out executions, torturing, stoning, amputating limbs, and splashing acid on the face and eyes of the women?