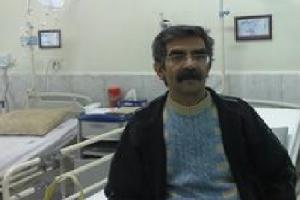 My father was wearing the glasses but in prison, he fixed his glassed with a waistband, I asked him why?
When he answered my tears were wailing in my eyes. He said he didn’t want to break his glasses when the prison guards thrash and tortured him.

I’m 32 and joined the PMOI to achieve freedom for my country where I’ve never seen anything except tyranny. I wasn’t unfamiliar with my people’s suffering because I have had an experience since I was a child.
Thinking of one’s family makes you full of emotions and feelings, and you are always worried about losing them. We love them and we are ready to sacrifice everything in life for them so that we don’t see even a little bit of concern in their eyes. This is true about me and it is not an exception but life has been different for me than the others.

He suffered from severe pain for 7 months, day and night! The doctor said to my mother he was fighting to such a horrible pain which is intolerable. He couldn’t drink water in his last month.
This conspiracy continued till my dear father lost his life on March 29th 2011. In The last image I saw, he was so weak because of the pain and also the last video taken in prison 20 days before he died, is so painful for me.
This is the reality I have to accept. I’m not able to see his face and talk to him to tell him how much I love him and how much I am proud of him, is the worst fact. I remember his advice: the struggle against such an inhuman regime is a serious struggle, believe on their faiths and continue their way with no doubt. His voice in the last video has an important message for me… the message of resistance to the end….
The Iranian regime has tried to eliminate PMOI several times but they couldn’t. All their tactics have failed so they have no way to put pressure on the PMOI.
Some people may have this question that who are those people who come in front of the gates of the camp Liberty in Iraq in the name of PMOI family?
They are the ones who were threatening us for 2 years with 320 loudspeakers shouting they want to kill and execute us and hang from the electricity poles.
They shouted that they wanted to burn us and cut us into pieces. They paved the way of 2 attacks and bloodbath in Ashraf.
Why they threatened us to death and massacre?
Now this conspiracy named so called PMOI family are forming behind Liberty gates. They claim they’re our families; this is while our real family has no permission to come out of Iran to visit us and if they have any contact with us, they will be dealt with severely.
What was my father’s guilt who was sentenced to 10 year prisons and exile, even he wasn’t given allowed to undergo chemotherapy? He was forced to torment to death…
His guilt was my presence in Ashraf. This is the most important red line for the Iranian regime… if our families have no destiny in Iran except execution and torture, why some families are able to come in front of Camp Liberty???
They all have been hired by the Iranian regime to start new conspiracy as the same as they did for three years in Ashraf.
This is a contradictory feeling for these two families.
Can we name the ones who come by the Iranian regime’s order behind the gates of Liberty as our family? Or we have to do something to overcome such conspiracies. International community in Iraq has to hold up to its commitment towards residents in Camp Liberty.

*About the author: Narges Dogmehchi, was graduated in nursing and microbiology. She has joined the PMOI to achieve freedom for her country Iran.