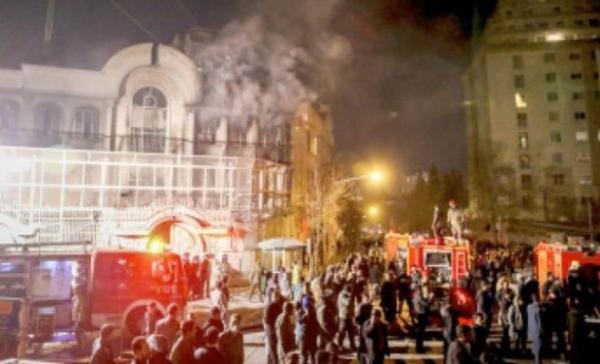 In this Jan. 3, 2016, file photo, smoke rises as Iranian protesters set fire to the Saudi Embassy in Tehran. — AP

Dubai — A leaked audio has established Iran regime’s direct involvement in the attack on Saudi Embassy in Tehran earlier this year.
The mastermind of the Saudi embassy attack has confessed that he carried out the mission after the Iranian government and leaders gave him a green light, according to the recording published by Amad News through the Telegram app, which has become the opposition Green Movement’s platform.
The audio recording, which is reported to have been revealed by sources close to the opposition Green Movement inside Iran recently, also explains why authorities in Iran have delayed the trial of those who carried out the attack.
Alleged mastermind of the attack Hassan Kurdmihan, an extremist cleric, can be heard in a series of calls as he directed members of the Basij and revolutionary guards to burn and destroy the embassy and seize all documents inside it.
Kurdmihan can be heard telling his followers: “The attack has been carried out upon a green light from the government and the regime. This is why security forces allowed raiding the embassy and did not act (against us).”
He is also heard talking to members of the Noor-e-Marefat institution, a lobbying party which he heads. The Noor-e Marefat institution includes Basij members.
Kurdmihan had earlier confessed to being the mastermind behind the attack and inciting members whom he described as “the revolutionary sons of Hezbollah” from the Basij and revolutionary guards.
He had also spoken about the “collusion” of Iranian President Hassan Ruhani’s government which he claimed did not prevent the attack on the embassy but rather facilitated it.
In an open letter directed to Ruhani in August, Kurdmihan said: “The government’s collusion in the attack was clear as it would have been able to prevent the attackers if it had wanted to,” adding that “the attackers were expected to be beaten up by police and security forces.”
The Saudi embassy in Tehran was attacked in January. Two weeks after the attack, Iranian judicial authorities said they interrogated Kurdmihan based on accusations that he incited the attack. However, they neither detained nor arrested him.

Massacre of political prisoners in Iran

At least 16 Kurdish women are political prisoners in Iran