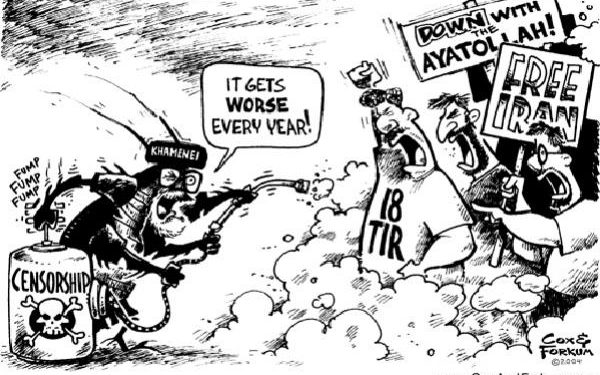 Following the increase use of social media, the Iranian regime intensifies censorship

Mehdi Roudbareki said in an interview with Tasnim news agency on Thursday, February 25th that these individuals “launched a front company and began making contacts and attracting customers”.

Over 3,000 such books, such as “Satanic Verses” and published material related to the Baha’i minorities, were confiscated from these individuals, according to this IRGC intelligence official.

Books related to the People’s Mojahedin Organization of Iran (PMOI / MEK) and monarchists were other publications confiscated by the Gilan IRGC intelligence teams.

These individuals have been handed to the judiciary branch, the Gilan IRGC intel chief added.

It has been years that many books are banned inside Iran and they are provided to those interested through the Internet and underground markers.

The price for printed versions of these books is usually expensive. However, the market of banned books in Iran have their share of customers and in recent years street vendors have been seen entering this market.

Book censorship and increasing restrictions on publications is the most important element behind the growth of the underground book market in Iran. Back in December the Iran Writers Center issued a statement once again protesting the policies of the Iranian regime in the field of culture.