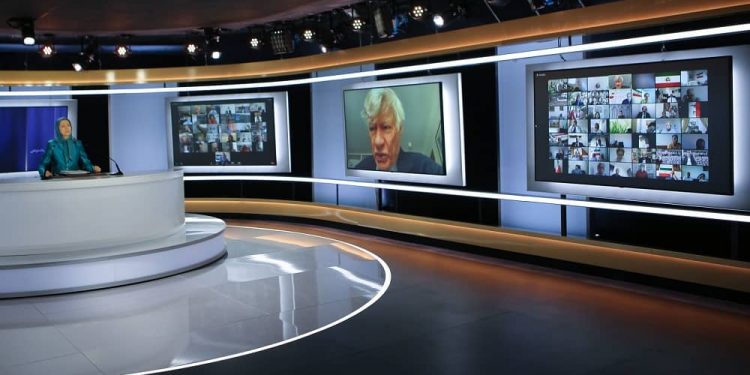 In a conference coinciding with the 33rd anniversary of the 1988 massacre of political prisoners in Iran, more than 1,000 political prisoners and witnesses of torture in prisons and dungeons of the clerical regime demanded an end to the impunity enjoyed by the regime leaders and to prosecute Khamenei, Raisi, Judiciary Chief, Eje’i and other perpetrators of the massacre. During the 1988 massacre, based on Khomeini’s fatwa, the clerical regime executed at least 30,000 political prisoners. Most of the victims were members and supporters of the Mujahedin-e Khalq (MEK/PMOI). They were massacred for their steadfast commitment to MEK’s ideals and the Iranian people’s freedom.
Geoffrey Robertson, QC, Human Rights Barrister and first President of the UN Special Court for Sierra Leone, was one of the event’s speakers. In his remarks, Mr. Robertson, who has investigated the 1988 massacre, said that the 1988 massacre amounts to genocide. He said: “It has been a crime to kill prisoners for centuries. The difference is that if it amounts to a particular crime of genocide, there is an international convention that binds countries to take action and punish that genocide.”
Referring to Khomeini’s fatwa as the basis of the massacre, he reiterated, “It seems to me that there is very strong evidence that this was a genocide. It applies to killing or torturing a certain group for their religious beliefs. A religious group that did not accept the backward ideology of the Iranian regime… There is no doubt that there is a case for prosecuting [regime President Ebrahim] Raisi and others. There has been a crime committed that engages international responsibility. Something must be done about it as has been done against the perpetrators of the Srebrenica massacre.”

What happened in Iranian prison, in that dreadful time in late July and August of 1988. I did an investigation for the Boromand Foundation some years ago. I interviewed about 50 survivors of those prisoners at that time, and I set out my conclusions, firstly as to the fact that thousands of members of the MEK were called before a death committee and directed it once they affirmed their allegiance. They were without any trial, without any defense lawyers, without anything, they were sent by the dead committee to a corridor on the left so-called court and they were taken and hanged.
The death committee knew, all members including Raisi knew what was happing they knew they are sending thousands of prisoners to death. And of course, they were implemented, deliberately knowingly a fatwa issued by the Supreme Leader. Now, what was their knowledge, they knew exactly what was happening in that corridor where they directed these poor prisoners, but the question arises because it is important, this was barbaric, it was the ultimate in brutality.
But what was it in law, because what it was in law makes a difference. It was a crime; it has been a crime for centuries to kill prisoners without trial, to kill those who have been surrendered or have been in your custody. But the difference is that if it amounts to one particular crime, the crime of genocide, then there is an international convention, which bonds the countries of the world, including the United States, it was ratified by president Reagan, binds the countries, to take action.
Now, to punish that genocide, what is it genocide? it is certainly a number of other offensive, its murder, its persecution, it is various offenses under international law, that set up and that created the international criminal court. But to punish those offenses you need to go through a lot of groups, you need to get a resolution from the Security Council to send the case to the international criminal court, and Russia or China, or America actually … to veto. So, it’s important to see, to analyze whether what happened to those thousands of MEK before, was properly and lawfully classed as genocide. Now in order to amount to genocide, it has to be the killing of a group on the basis of their race and religion, not on the basis of their politics. We can call that politicize like that it is genocide, the genocide is confined. Stalin killed 3 million …, but he wasn’t into genocide because he didn’t kill them to their race or religion. So it is an artificial difference you may think, but there are two reasons for it.

Firstly, the practical reason, the race, and religion are the two factors that most usually they make hatred, hatred between neighbors, hatred between different classes of people, and particularly volatile, and also race is something you can’t help, religion very often is something you can’t help, so you can’t change. So, these are two factors that we have to see whether race hatred or religious hatred was the purpose of killing this group of MEK prisoners. Well, we have to go back to the fatwa itself to see what the purpose was, and the fatwa issued by Khomeini began this way; since the treacherous MEK do not believe in Islam, and whatever they say stands from hypocrisy, they have become renegades and since they wage war on God.
So, this is the reason, principal reason, “waging war on God”. Moharab, this is the reason it goes on, and suggest the political reasons as well, but MEK ever since its foundation, was distinguished from Khomeini’s group, because of their more fundamentalist view of Islam, and of course, the MEK was more liberal, and it is quite clear, as I read this fatwa’s translation. That it was a religious reason was the primary reason why these people were killed and Khomeini went on, and this was the direction that Raisi, on his own will, deliberately was following. It is naive to show Mercy to Moharabs, those who wage war on God. The decisiveness of Islam before the enemies of God is among the unquestionable tenets of the Islamic regime. So here is a bureaucracy imposing the death penalty and goes on, kill them with revolutionary rage and rancor these enemies of Islam, must be most ferocious against the infidels.
So, I don’t think there is any doubt that the order from the supreme leader, accepted willingly, by Raisi, who didn’t have to. Ayatollah Montazeri was bagged him to stop, but the other members of the death committee continued and of their own will to carry on, and ordered to kill on with rage and further on for basically, the reason of religion, because the religion of the MEK held to was different to that, which the theocratic state insisted upon it.
And I think it is interesting when the use of these killings first came up through the United Nations. There was an attempt by the regime to defend them and it was an attempt by the then chief justice was Ardabily, and he explained to the UN, he said we are not a secular state, so blasphemy is not permitted. So, he said this was a form of punishing blasphemy and that of course is the crime of the religion having the wrong religion. So, it seems to me that there is very strong evidence that this is genocide, and the genocide convention was ratified by Iran in 1956, under the last Democratic regime, that was overthrown by CIA and MI6, but it applies to killing or causing serious mental or physical harm to members of a racial or religious group as such. Now, it wasn’t members of a racial group, they were all Iranian, it was the members of a religious group as such, a religious group that did not accept the fundamentalism of the Ayatollah and the theocracy of this theocratic state, and it viewed as the most heinous of international crimes, it is mass murder by fellow humans, something that they can control attempting there conscious. The religious group with the Iranian regime intended to destroy were those who held a different view of Islam. And latter of course in September they moved on and killed those who were atheist or communist or left-wingers of some form, in other words, those who had denounced Khomeini’s view of Islam.
And of course, there are decisions in the courts, that if you are atheist that amounts to killing on grounds of religion, even though they have non, that’s the reason. So, there is no doubt, it seems to me that there is a case for prosecuting Raisi and the others … and that is the crime which engages international responsibility, and something must be done about it as being done by the perpetrators of Serbinitsa, was the last declared genocide in international law.
So that is the, I think, I would believe them the actual description of what went on if you look at the actual evidence and decide to classify this is genocide and then an International Convention, which requires states of the world that have signed up to it, most states have, to take action against those who perpetrated it, and one of them was the president of Iran.