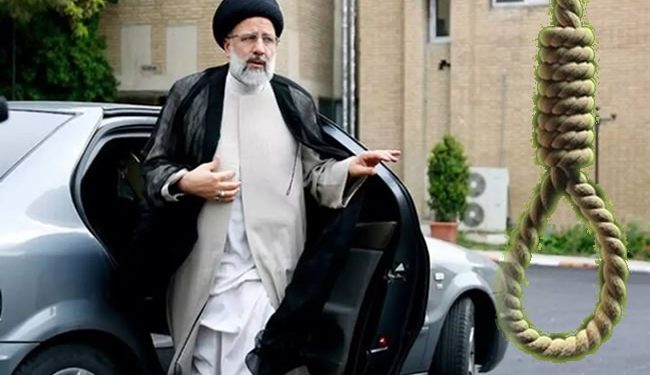 Iran: Who is Ebrahim Raisi?

The National Council of Resistance of Iran (NCRI), and the People’s Mujahedin of Iran (PMOI / MEK Iran), reported that henchman Ebrahim Raisi registered for the Iranian sham election.

Following history up till today
How dictators live on massacring nations#رئیسی_جلاد۶۷ pic.twitter.com/NNVaa1JgJ1

Raisi registered for the sham election

On Saturday, May 15, 2021, the candidates for the Iranian regime’s sham presidential election, such as henchman Ebrahim Raisi.

Ebrahim Raisi is the henchman of the 1988 massacre, the murderer of the People’s Mujahedin of Iran (PMOI / MEK Iran), and one of the worst criminals against humanity.

Raisi in 1985, due to his active role in suppressing and killing the (PMOI / MEK Iran), members and supporters, and was appointed as the deputy to Ali Razini, the notorious Revolutionary Court Prosecutor in Tehran, and served as the director of division handling opposition groups.

Raisi in 1988, at the age of 28, Raisi was appointed by Khomeini as a member of the death commission in Tehran which carried out the 1988 massacre of thousands of political prisoners based on Khomeini’s fatwa.

Hossein-Ali Montazeri, Khomeini’s designated successor at the time, speaking with the “death committee” in Tehran, including with Raisi, about 20 days after the start of the killing spree. Montazeri warned them that these executions would be considered the biggest crimes committed by the Islamic Republic.

In that meeting, Hossein-Ali Montazeri questioned them about the execution of pregnant women and 15-year-old girls. It was subsequently exposed that Ebrahim Raisi was the most active and most ruthless member of the committee.

In the aftermath of the 2009 uprisings in Iran, in an interview with state television on December 27, 2009, Raisi called all protesters as “Mohareb” (enemies of God) who deserve to be executed, and said, “In the case of the MEK organization, anyone who helps the organization of the MEK in any way under any circumstances, because it is an organized movement, the title of Moharebeh applies.”

In 2014, he became the mullah regime’s, Attorney General.

In March 2016, Khamenei appointed him as the custodian and chairman of Astan-e Quds Razavi, one of the regime’s largest financial conglomerates and endowments with various holdings. Astan-e Quds Razavi is one of the main entities involved in astronomical looting and plundering of the Iranian people’s wealth and resources.

Khamenei appointed Raisi as the Judiciary Chief in March 2019.

The US and the EU have sanctioned Raisi for his role in executions, human rights abuses, and the massacre of political prisoners.