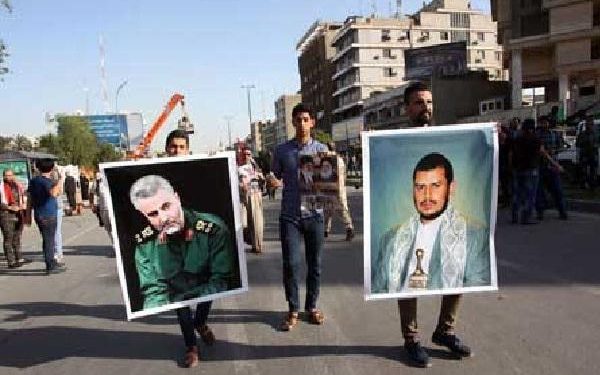 Shaheen Ghobadi to Asharq al-Awsat: This consignment was sent to Sanaa last month through Tehran’s Mehrabad airport
Iranian dissidents told Asharq al-Awsat yesterday Tehran has sent dozens of tons of weapons for the Houthis. Shaheen Ghobadi, a senior member of the Iranian opposition, revealed a security report obtained by Iranian dissidents from inside the country revealing Iran’s activities in Yemen. Intelligence provided in this report include

s the transfer of 50 tons of arms and logistical supplies by the Quds Force for the Houthis, all taking place last month under the guise of Iran’s Red Crescent and sent from Tehran’s Mehrabad airport to Sanaa.

A number of these dissidents hosted an Internet conference last night, during which Asharq al-Awsat raised a number of questions about the future of paramilitary operations launched by Iranian officials in Arab countries, with Yemen, Iraq and Syria topping the list.
“Iran certainly lacks the capacity to launch wars in all these countries,” said Mr. Ghobadi, an Iranian dissident and member of the National Council of Resistance of Iran Foreign Affair’s Commission, and this Council’s press spokesman.
“If the Arabs unite strongly Tehran’s rulers will be forced to retreat from what they are doing, especially in Yemen,” he added.
Speakers in this conference referred to Iran’s relation with the export of fundamentalism through meddling in the internal affairs of regional states. They also described how this is considered one of the pillars of Iran’s rule in Iran, and also a strategic element vital for their survival. What must not be forgotten is the fact that Tehran’s main objective is to gain control and dominance over Iraq.
Mr. Ghobadi said the Iranian opposition has warned time and again that Tehran’s meddling in Iraq and the region, especially Yemen, is “a threat 100 times more dangerous than its nuclear project”… However, according to information from inside the country, “Tehran was caught completely off-guard from the response seen from regional countries, finding itself as the loser in all regional equations.”
“Tehran has seen itself in a trap… and this is crystal clear in the hysteric reactions of this regime’s senior officials, especially [supreme leader Ali] Khamenei himself,” he added