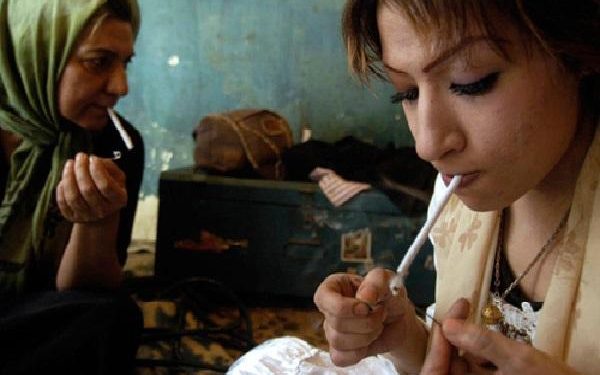 The issue of growing drug addiction in Iran has reached its most critical stage, especially with the scope of this crisis casting a dark shadow over Iranian women.

Official statistics in Iran: 1.5 to 2% of all Iranians are drug addicts

Ali Hashemi, head of a working group focused on drug addiction in the Iranian regime’s Expediency Discernment Council said in an interview with the state-run ILNA news agency on Monday, February 22nd: “The number of drug addicts in the streets has increased ten-fold in the past 8 years.”
Around three weeks ago he had said in another interview with ILNA that from March 2015 to January 2016 a total of 2,274 drug addicts in Iran had lost their lives due to drug addiction.
The issue of growing drug addiction in Iran has reached its most critical stage, especially with the scope of this crisis casting a dark shadow over Iranian women.
In this regard Shahindokht Molavaradi, Hassan Rouhani’s deputy in women and family affairs had said, “The index of drug addiction amongst girls is the opposite of boys who mostly use traditional drugs. Girls are seen mainly consuming industrial drugs and other drastically changed products. This in itself is a major cause for concern.”
Prior to this in June 2015, Najib Hosseini, vice president of Iran’s Anti-Drugs Department had said drug addiction amongst women has increased from 5% to 10%.
Parvis Afshar, spokesman of the Anti-Drugs Department had reported on November 1st that the number of female drug addicts losing their lives in the period of March 2014 to March 2015 increased 33% in comparison to the same period the year before.
Iranian Interior Minister Abdulreza Rahmani Fazli had said back in September the drug-market in Iran has a value of around 100 trillion rials (around $2.8 billion) in Iran’s overall economy. This sheds light on who is actually behind this entire phenomenon and crisis.
The fact that Iran’s terrorist entities have been exporting narcotics across the Middle East and pocketing millions in profits has also become a major issue in the region and across the globe these days.
Al Arabiya TV reported on February 4th: “The Drug Enforcement Administration in the United States revealed that Lebanese Hezbollah members, arrested for drug-related charges and used millions of dollars to provide financial support for Hezbollah in Syria, are associated to this group’s foreign security entity. Washington emphasized Hezbollah continued its activities through a system in Columbia named ‘Black Pazuye’ by collecting money from selling and smuggling narcotics to the United States and Europe.”
Adding to all this is the security profits the Iranian regime is gaining by continuously executing drug-addiction victims across the country, cementing a climate of fear throughout the population and silencing all dissent.
“A large number of people may have been executed for their drug-related crimes, and we may have paid the international price for this,” Ali Hashemi said. “But truly, have these executions had the impact we needed? Conducting a review in this regard is the duty of the crime research center and … 99% of the people executed in Iran are not members of the main mafia behind the drug business; the mafia is sending others to the gallows, and easily continuing with their own lives…”