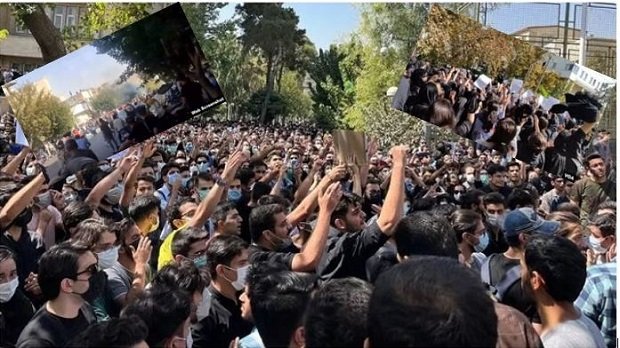 Now for three weeks, people in Iran are dying on the streets because they have decided to revolt against the dictator and take it down. In the city of Zahedan, there is already talk of ‘massacre-like attacks’. Some disappear without a trace, such as 16-year-old Nika Shakarami in Tehran.

Her body was handed over to her family days later and was then kidnapped again by the authorities so that her burial would not fuel the protests any further. The fears of the authorities were justified. The violent actions of the regime troops only seem to fuel the anger of the population even more.

What is happening in Iran is unavoidable, just as a system collapse is unavoidable too. Independent local press is impossible. Internet access, which has been massively restricted by the regime, is causing the flow of messages to be delayed.

But despite this, we are getting witness reports, pictures, and videos that show cruel attacks on and shootings of demonstrators. But also, courageous women who stand in the way of armed troops, and students who bully their regime-loyal teachers from the schools.

Those who are still protesting under these conditions are deadly serious and have decided to make a change and help the revolution to be realized in Iran. And now that includes children, who are following their parents on the streets and chanting slogans that are challenging the regime’s entirety.

Children who are mocking the regime’s medieval laws desire a proper life while witnessing the misery of the previous generations.

In contrast to previous protests, this time not only a certain part of society is taking to the streets. In 2009 it was mainly the middle class who demonstrated, in 2019 the lower income groups. In the current protests, we see solidarity across society, across demographic and ethnic boundaries, and across social classes. In addition, the protests have a strong emotional component.

Now, many are reporting that they have the feeling that something completely new is happening here, something qualitatively different from what they have experienced on the streets before. The headscarf is just a symbol of deeper problems. Far-reaching socio-political questions are attached to the protests, which have accumulated over decades.

In contrast to many previous protests, the demonstrators here wanted to overthrow the existing order right from the start. Shorts wins are no longer enough for them. From day one people were shouting ‘down with the dictatorship’.

Henceforth, the regime’s repressive forces will apparently not be able to enforce its power without running the risk of new protests breaking out.

Protests are surging across Iran