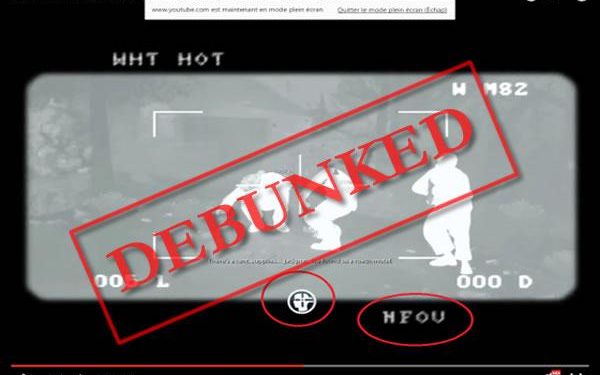 France24 aired a documentary revealing how the Iranian regime resorts to forgery and decptions in showing images of an American video game as scenes of Lebanese Hezbollah members fighting in Syria to claim this groups is actually fighting against ISIS in Syria. This comes at a time when Hezbollah is hated and condemned due to collaboratoin with the mullahs’ regime and participating in the killing of the Syrian people. With each passing day there is more evidence of coordinationa and collaboration between this group and ISIS (or Daesh, the Arabic acronym for self-proclaimed Islamic State), the Assad regime and its proxies.

In the past week the Arab League has listed Hezbollah as a terrorist organization.

These images, aired by a state-run Iranian regime TV station, claim to show very effective Hezbollah snipers in Syria killing Daesh terrorists, France24 reported. However, all these images are complete lies and you will never imagine where they are actually from… however unbelievable they may be, these images are related to a video game, and the Iranian regime attempted to portray them as actual of scenes of battle.

France24 then aired the images in better quality and it became obvious the aired footages are from a popular video game called “Medal of Honor”, with the same target logo and trademark.

These days all across Iran people are seen protesting as they cannot make ends meet with their minimum wages. Demands of the Iranian regime ending its presence in Syria is engulfing the entire country. People are especially chanting to Iranian supreme leader Ali Khamenei, “Let go of Syria, start thinking about us.”

Chant in Gohardasht Prison: “Set fire to the principle of velayat-e faqih”

“Mothers of plaza de Mayo” & the struggling mothers of Iran