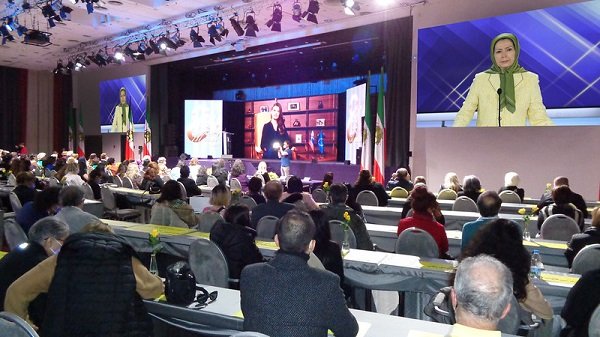 Solidarity with the struggle of Ukrainian women

Iran and Ukraine have no common border; in fact, they are hundreds of miles away from each other. Both, however, have one thing in common: both nations are fighting for their freedom and sovereignty. The enemy in Ukraine is Russia, an outsider, unlike the enemy in Iran that is from within, a fact that at times has made the situation more complicated. The extremist fundamentalist regime of ayatollahs has established its murderous dictatorship on Iranian people for the past forty-three years. 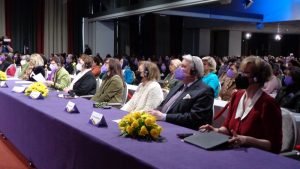 Every year the Iranian resistance celebrates March 8, the International Women’s Day. Women hold many key positions in the ranks of Iranian resistance. In this year’s gathering distinguished women from different parts of the world came together through internet. That included Kiev, the resistant capital of Ukraine and Ashraf3 in Albania, where the members of the Mojahedin, the main opposition to the regime of Iran are situated.

“Women Force for Change in Iran, Global Peace, and Stability” was the title of this international conference held on Saturday March 5. Mrs. Maryam Rajavi, the President-elect of the National Council of Resistance of Iran (NCRI), in her opening speech, praised the people, and in particular, the women of Ukraine for their proud resistance. “Let us call International Women’s 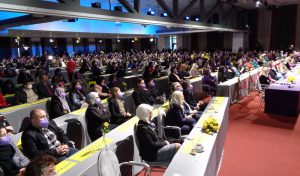 Day this year, the day of resistance by the women of Ukraine”, Rajavi proposed as she asked the audience stand up and applaud the Ukraine people for one minute.

Mrs. Rajavi described the ongoing resistance of Ukrainian people as “an epic in defending the honor and survival of their country”. She added, “They stood up and challenged the West’s appeasement and passivity. They stood up and motivated the world to support them. Their people and soldiers have stood up firm like steel”. She went on to talk about the struggle of Iranian women inside Iran and in prisons and torture chambers of the Iranian authoritarian regime. “This is the real image of Iranian women. Her cry is not out of despondency and despair. Rather, it is a battle to overturn the status quo of captivity, to build a future that we can and must achieve.” Rajavi also referred to the great resistance of Iranian women in the 1988 massacre. She concluded, “The PMOI women firmly stood up to the barrage of slanders. They persevered for years under military and missile attacks, stood empty-handed in front of tanks, and pushed them back. Thus, they proved their competence and capabilities on the battlefield.”

Other distinguished women participants in the conference also joined Mrs. Rajavi in her comments. Mimi Kodheli, former Albanian Minister of Defense, whose country has given refuge to almost 3000 (including 1000 women) combatant of Mujahedin of Iran said, “Iranian women are at the forefront of all protests inside Iran. What does that mean for women who are suffering from gender apartheid across the world? Condemning suppression of women in Iran is not enough. We need to support these women in Iran and worldwide”.

Then it came to the participants from Ukraine, who were talking online from their war torn cities. Lisa Yasko, a member of Ukrainian Parliament said, “In Ukraine, we have a war. Our brothers, fathers, and sons are in the war. Women are working really hard. Lots of us have taken up weapons. Others are doing humanitarian aid.” She continued, while everyone was expressing their feelings and sympathy for her, “If we lose faith, we will never win. It is very important to keep faith. To everyone who is listening, don’t give up on your country. We’re fighting for all of you. If we don’t defend our freedom right now, history will never be the same. I’m very proud of my nation and I send my love to all of you. We need peace in Ukraine. We need peace in the world.” 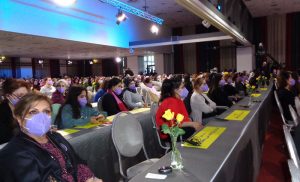 Other Ukrainian MP addressing the conference was Kira Rudyk . She took up arms for the first time at the start of Russia’s invasion of Ukraine. She was speaking directly from Kiev. . “All countries of the world said that we would not stand a chance and Kyiv would fall in 24-48 hours. It’s ten days and we are still standing. This happened because of our army and because of the bravery of the resistance,” she said.

The conference ended, but the struggle of Iranian men and women will continue until final victory over the misogynist dictatorship of the ayatollahs. ُThat day does not seem to be far away.