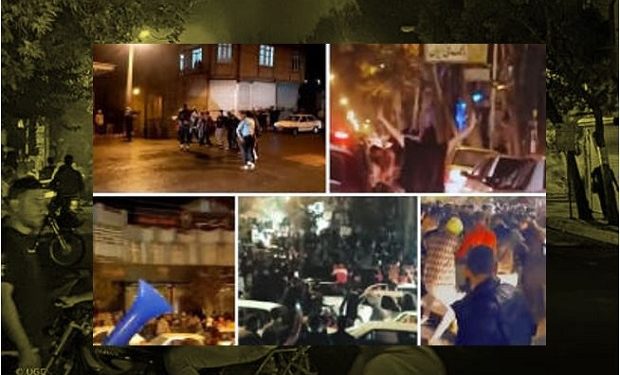 Iranians celebrate team’s World Cup loss to US with fireworks.

Some of our older generation may remember the days when their homeland was occupied by Nazi Germany. All the state entities were under the control of the enemy. State’s internal and foreign key policies were to fortify the rein of the third Reich. Any resistance was punishable by death. This is what, or worse, that is happening in Iran today.

By Iran Probe staff
Iranian people’s uprising, already in its third month, has extended to various ethnic and social parts of the Iranian society. Women and the young are in the front row. Iranian regime has resorted to new repressive tactics. In different cities, not only the armed forces but also the plain-clothes agents fire at the protesters. Increasing victims also include children, such as Kian 10 and Hasti 7 years of age.
Many people who stayed silent in the previous protests have now kept distance from the government. Many celebrities, artists, writers, Professors, etc., have voiced in support of the people. In terms of sport, some athletes have been arrested and tortured; some have even been executed, while many have quitted the country. Many Iranians consider those who stayed with the government as traitors. This is why Iranians do not recognize the team participating in the World Cup in Qatar as their own.
Imagine that in the very first days of the war, Russia could capture Ukraine and make it their own. While everything was under the control of the enemy, how could Ukrainians have a sport team with Ukrainian identity on the field?

Before the tournament in Qatar began, many Iranians voiced that this was not their team and should be expelled from the games. In the capital Tehran, angry protesters burnt some banners of the national team. A group of former Iranian sport champions sent a letter to world soccer’s governing body FIFA demanding their own country be withdrawn from next month’s World Cup. “We contacted FIFA and we said enough is enough. We believe that Iran is killing protesters. They should be banned until we have a democratic country like any other country in the world.” They wrote.

Pictures of children killed in the protests were widely shared by Iranians on Twitter, with messages such as “They loved football too, but they were killed by the Islamic Republic.” Some others cried, “Russia was expelled from the tournament over the war in Ukraine” “but a state that is committing crimes, committing a massacre against its own people is legitimized by FIFA.” A former member of the national team wrote in his social account, “How bitter it is that you still don’t know that fame without honor has no value for honorable people.”
Iran’s Minister of Sports admitted that people did not welcome buying World Cup tickets or going to Qatar.
On Tuesday night, after the match and the elimination of the Iranian team, people in different cities of Iran poured into the streets, shouted for joy, sounded the horns and danced until dawn.
When the regime uses tanks in Kurdistan, when it targets the people in Khuzestan and Tehran from helicopters, when it opens fire on unarmed protesters in different cities, and when the people of Iran keep on their fight, this is a fierce war between the people and the government.
Sending the team to the World Cup was a scene of this war. Khamenei and other mullahs wanted to make the world believe everything is normal and people have no problem with the government. They failed and the people won.
The war goes on… and until other victories.

Systematic violence against women in Iran during Iran protests