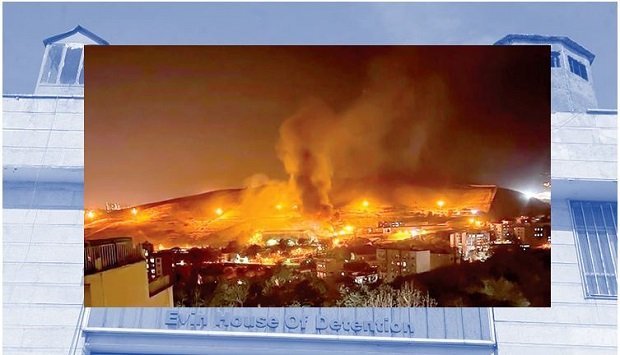 A summary of reliable information gathered from inside Iran about the rebellion in Evin Prison is as follows.

On Saturday, when inmates in Evin Prison expressed their support for the nationwide uprising, they were attacked by prison guards, and clashes erupted.

According to reports, a fire broke out in prison at around 9:00 PM local time. At the same time, heavy explosions and gunfire were heard from inside the prison perimeter. Visual reports show that the regime has used grenade launchers and machine guns to suppress the rebellion. The confrontation took at least two hours to settle. Official sources announced that eight people were injured during the riot. In further updates, the regime said that four people were killed due to smoke inhalation.
As soon as the news about the clashes and fire from inside the prison break, a large number of people from across Tehran rushed towards Evin Prison by car.
The forces that were brought in to crack down on prisoners included the Special Police Forces (NOPO), the Revolutionary Guards (IRGC), and Basij forces, as well as conventional law enforcement. Helicopters, drones, and quadcopters were also used to control the traffic and an eventual protest outside the prison’s perimeter.
Security forces tried to close one side of the Imam Memorial Highway (next to Evin Prison) towards Tehran to reduce the spontaneous rally around the prison.
Conclusion:
Iranian regime Using all means of propaganda, the regime has tried to downplay the incident. State officials’ claims that a fight erupted among inmates with financial charges shows the matter’s sensitivity.
people of Iran all over the country are overcoming fear and terror.
The solidarity of the people of Tehran and the rapid reaction by rushing toward the prison and fighting with the repressive forces around the prison shows a growing unity among the people that has been building up during the uprising.