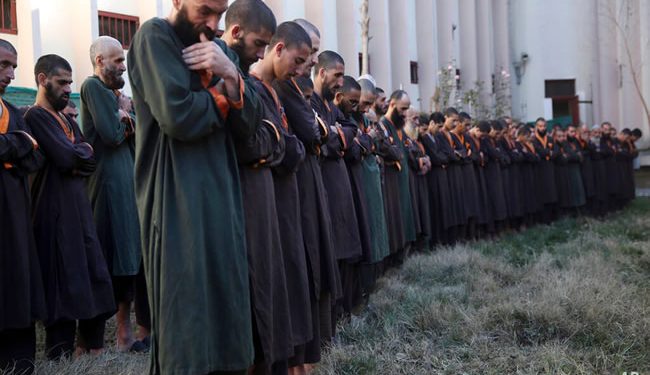 published on published Voice of America

A recent Iranian offer for Afghanistan to use Iran-backed Shiite militias in the fight against Islamic State militants is viewed by some Afghan lawmakers and experts as a threat to Afghanistan’s volatile security.

Since the beginning of Syria’s civil war in 2011, Iran has reportedly deployed tens of thousands of Shiite fighters from across the Middle East and beyond to fight on behalf of Syrian President Bashar al-Assad’s government.

Among those recruited by Iran are thousands of Afghan Shiite fighters, who have largely been fighting under the banner of the Fatemiyoun Brigade, a U.S.-designated terror group.

Iranian officials, however, now say the Afghan government can take back these fighters to use them in Kabul’s campaign against the IS terror group in the country.

In a recent interview with the Afghan network Tolo News, Iranian Foreign Minister Mohammad Javad Zarif said those Shiite fighters were “the best forces” to help the Afghan government in its counterterrorism efforts.

The Fatemiyoun Brigade “can help, if the government of Afghanistan is willing, in the fight against Daesh and terrorism, and the protection of Afghanistan’s security,” Zarif said, using an Arabic acronym for IS.

This offer, according to Michael Kugelman, deputy director of the Asia Program and senior associate for South Asia at the Woodrow Wilson Center, is “very risky for Afghanistan.”

He said allowing the Fatemiyoun Brigade to fight terrorism in Afghanistan could incite more sectarian tensions in the conflict-ridden country.

“The notion of arming several thousands of Afghan Shiite fighters and having them go after ISIS [in Afghanistan], to me that really suggests that sectarian tension, which has been present in Afghanistan but relatively latent, … could explode,” Kugelman told VOA.

Shiite Muslims in Afghanistan, mostly ethnic Hazaras, are estimated to be 10% to 15% of the population.

Kugelman said that the return of thousands of battle-hardened and radicalized fighters to Afghanistan would pose a security threat.

“I think it is a significant national security risk for Afghanistan that would require significant care and attention to ensure that it does not actually become a clear and present danger,” he said.

Western media have estimated the number of Afghan Shiite fighters deployed by Iran to Syria since 2013 to be between 10,000 and 12,000.

Tehran says about 2,000 Afghans are still fighting in Syria. Iranian officials have said Afghans are fighting IS in Syria to make Afghanistan more secure.

The Afghan government, however, insists that Afghans should not take part in any regional conflict.

“Afghanistan’s foreign policy does not allow Afghan nationals to engage in regional wars and conflicts,” Gran Hewad, a spokesman for the Afghan Ministry of Foreign Affairs, said last week.

In 2019, the U.S. designated the Fatemiyoun Brigade and the Zainabiyoun Brigade, another Iranian-backed militia made up of Pakistani Shiite fighters, as terrorist organizations.

Some Afghan lawmakers have expressed concerns that a potential presence of the Fatemiyoun Brigade could be a destabilizing factor in Afghanistan.

“One of the possibilities is that the youth would be recruited by [these] extremist groups and this will help the fighting in Afghanistan to continue,” said Shinkai Karokhil, a member of the Wolesi Jirga, the lower house of Afghanistan’s parliament.

Karokhil told VOA that some countries in the region use religious extremism as a means of achieving their political objectives.

“Afghanistan, where fighting has been going on for decades, serves as a battleground where [other countries] can take revenge from each other, but the people of Afghanistan would be paying the price,” she said.

Nadir Fahimi, a retired Afghan general, added that most of the Afghans have joined the Fatemiyoun Brigade because of unemployment and poverty.

He said Afghans living in Iran should not be sent to fight in Syria, and he added that Afghan refugees and migrants should be treated according to international laws.

The United Nations says there are about 3 million Afghans in Iran, about 900,000 of whom are refugees. The rest are documented or undocumented migrants.

“Our [Afghan] brothers went to [Syria] voluntarily, just like those who went [to Syria] from Iraq or other places. We supported them in Syria to fight against Daesh, a common enemy for all of us,” Zarif said during his interview with Tolo News.

Some Afghan fighters who went to Syria, however, have told VOA and other media outlets in recent years that they were trained in military camps inside Iran and then dispatched to Syria.

New York-based Human Rights Watch (HRW) in 2017 reported that Iran’s Islamic Revolutionary Guard Corps had recruited thousands of undocumented Afghans living in Iran — some younger than 14 — to fight in Syria since at least November 2013.

HRW said Iran has offered incentives to Afghan recruits living in Iran, but has also threatened them with deportation if they refused to fight in Syria.

Rami Abdulrahman, director of the Britain-based Syrian Observatory for Human Rights, said Iranian-backed Afghan fighters are the second-largest group of foreign fighters in Syria after the Lebanese Hezbollah.

Although Iran maintains that Afghan fighters are in Syria to defend the Shiite sacred sites, Abdulrahman said that Fatemiyoun Brigade has over the years expanded its presence to many parts of the country.

The “majority of them are helping the [Syrian] regime in the Badia, Palmyra and Deir el-Zour,” he told VOA.

With the help of Afghan fighters, experts say, Iran has been able to significantly expand its presence in eastern Syria, especially in areas along the border with Iraq.

In recent years, Iran has built a large network of proxy militias across the Middle East as part of its expansionist strategy in the region, experts say.

“This has made Iran’s neighbors nervous that if Iran can do that in Syria, it can repeat the same model elsewhere,” said Alex Vatanka, Iran program director at the Middle East Institute in Washington.

Iran – 99 lashes for two men and a woman