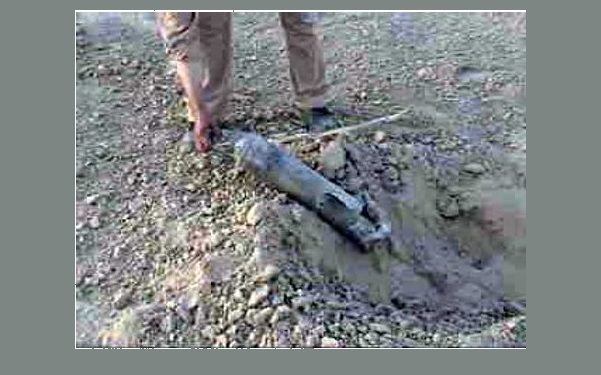 At 15:20 PM Wednesday, 28 December 2011 Ashraf time (8:15 PM GMT), Quds terrorist forces and their Iraqi collaborators known as Assaeb Al-Hagh, once again targeted Ashraf from the southeast side using 107 mm Katiusha rockets. This is the third criminal attack on Ashraf in the past 72 hours. Tuesday night’s attack did not cause any casualties.

The first attack occurred on Sunday 25 December as the United Nations’ memorandum of understanding was being signed to resolve Ashraf crisis.
At 3:30 pm Wednesday, Iranian regime agents were seen 2.5 Kilometers southeast of Ashraf in two cars. One of the cars was identified as a dark Patrol. They were busy checking the area to identify a suitable location to fire the rockets.
Ashraf residents informed the Iraqi officers, who are supposed to be protecting the camp about these suspicious activities, but they were deliberately unwilling and were ordered not to listen to the reports. This is clearly a sign of behind the scene collaborations.
It is not apparent why the government of Iraq that considers the presence of unarmed Mojahedin in Ashraf to be a violation of its sovereignty, remains silent facing continuous violations of its sovereignty by the mullahs’ regime and by doing so chooses to become an accomplice to war crimes and crimes against humanity committed by this regime’s terrorists?
The Iranian Resistance, according to statements released during the past 72 hours, considers Wednesday night’s terrorist attack to be the fourth breach of pledges made by the government of Iraq about protection and guarantee of security and well-being of residents of Ashraf following the signing of the memorandum of understanding.
Secretariat of the National Council of Resistance of Iran
December 28, 2011