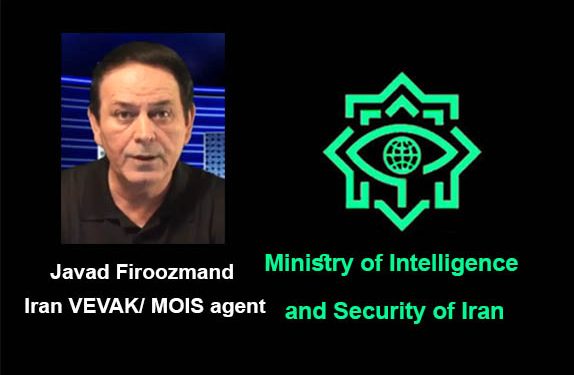 Javad Firoozmand, An agent of Iranian regime in France, disguised as a refugee

One of the proxies of MOIS (Iran’s Ministry of Intelligence Service), who acts against the opposition to the Mullahs in France in particular  demonizing the PMOI or MEK, is Javad Firoozmand.  The process of Firoozmand’s transfer from Iran to Europe elucidates how Iranian regime disguises agents of MOIS and send them to Europe as refugees, in fact to act against the real refugees and the opposition.

MOIS sent Firoozmand to Turkey in May 2005.  He was then transferred to France under the cloak of a refugee. His real mission has been following MOIS’s plans against political refugees and in particular the Iranian resistance. Firoozmand works in close relation with other regime’s agents in France and in other European countries.

How Firoozmand’s association with MOIS came to light

As an enhanced approach to identify and monitor the political refugees in France, through Firoozmand and another agent, Jahangir Shadanloo, MOIS established a front center in France under the name of “Society to support immigrants and Iranians in France”. Manipulating some Persian language electronic sites, Firoozmand and Shadanloo tried to publicize this society. They invited Iranian refugees to attend a meeting in cultural center known as FIAP on June 17, 2007. Iranian refugees who showed up in that meeting noticed that some known MOIS agents were also invited to the meeting. Anxious about their own security the refugees objected the presence of the agents.

It ended up with agents who were brought by Firoozmand viciously attacking Iranian refugees by knife, tear gas, knuckle duster, and other equipment. Some of the political refuges present in the meeting got severe injuries and were treated in hospital. When French police and security forces arrived at the scene they immediately arrested three main criminals and took them into custody. The three detained were Mohammad hossein Sobhani and two other hooligans of the group.

So, a meeting that was supposed to “support the immigrants and Iranian refugees in France” turned into a political scandal for the Iranian regime and its proxies abroad.

Testimonies by European and American sources

“Person who propagated against Mojahedin, was a real terrorist”. This was the heading of a report that appeared on that day’s French weekly magazine “Eco Regional”. The report was about the detainment of one of Firoozmand‘s colleagues in the FIAP. Eco Regional wrote, “On April 5, 2005 Mohammad Hossein Sobhani demonstrated in front of Auver Sur Oise municipality. He objected the refugee status given to PMOI members. He is an agent of Mullahs regime intelligent service. . . .   He, and two of his friend, are now under judicial persecution for attacking Iranian dissidents with knife in the middle of Paris. He is one of a three person group arrested in Paris.”

John Sano, Executive Director of National Clandestine Services of the US Central Intelligence Agency, in Bush administration, explained some of his experience about MOIS work procedure in a conference in Paris on February 2nd, 2013,

“One technic that the MOIS has properly used is something that we call “flag”. They place people to pretend they are someone else, namely the green movement or members of Mojahedin-e- Khalgh. Covert groups and agents who act instead of MOIS, disguise themselves as Iranian- American organizations or as credited academics. MOIS use different tactics to penetrate in Iranian communities abroad. Even here in France there is an organization called “ Support Iranian refugees” MOIS tries to hire Iranians to spy on other Iranians in France.

“If we want to discuss activities that, presently, do not contain violence, MOIS intelligent officers often resort to covert societies. These societies have miscellaneous appearances, and perform very different activities. Another society, formed by Jahangir Shadanloo, at No.70 Lourmel St., in Paris 15, by the name of         “Support for Iranian immigrants and refugees”, is in fact a center for recruiting new agents. Using nationalistic emotions, it is a trap for Iranian community and asylum seekers in France. “

The writer then introduces some of the MOIS proxies in France, including Javad Firoozmand and writes, “Javad Firoozmand is Jahangir Shadanloo’s colleague in Aria society and the covert electronic site Aria Iran has been provided to him for           campaign against PMOI”.

How new recruits are employed and dispatched abroad

At first, Javad Firoozmand used to live with PMOI in Camp Ashraf in Iraq. After the bombardment of Iraq by the coalition forces in 2003 he could not bear the situation in Iraq and left the PMOI to introduce himself to “TIPF’, a place, under control of the US Army, just outside Camp Ashraf. On March 10, 2004 he left the “TIPF” to surrender to the regime in Iran. Since a few years before this, Firoozmand had already had his ties with the Iranian Embassy in Baghdad. His liaison with MOIS in Tehran was someone by the name of “Mohammad Alavi”. Once, on July 15th, 2001, as a part of a plot directed by MOIS, Firoozmand after stole items including three weapons, a wireless radio, a car and a large amount of cash and tried to get himself to the Iranian Embassy in Baghdad using a fabricated identity card. He was, subsequently, arrested by the Iraqi police, charged with spying. Evidence and regret letters Firoozmand later wrote still remain with PMOI. Expressing his repentance he insisted if he could come back and be with PMOI again. In his letter of July 15, 2001, he writes,  “I beg you, get me back from Iraqis in any way possible. Tell them to continue their investigations from me when representatives of PMOI are present. . . . “

The PMOI therefore intervened to help Firoozmand and prevented his punishment by the Iraqi judiciary. Firoozmand was then given the choice to go back to Iran and live his ordinary life if he wished . . .  . However, he insisted to be forgiven for the treachery he had already committed and to remain with the PMOI.

“. . .  despite my treacherous background and evident crimes such as going to the Iranian Embassy and cooperation with the agents of MOIS, escape with forged papers, stealing a car, some weapons and money and . . . on August 30, 2001, in a meeting, in which some of top ranking members of the PMOI were present, I was told that they would help me with finance and transfer so that I could go back to Iran and live a normal life.”

However, on his own free will, on March 10, 2005, Javad Firoozmand moved to “TIPF”, just outside Camp Ashraf under the control of US Army. It was there that he rearranged his ties with the Iranian Embassy in Baghdad and finally left for Iran after he promised to cooperate with the Iranian regime. Immediately, in Iran he went through intelligence trainings. Two months later he was transferred to Turkey. He, then, with the help of some other MOIS agents such as Jahangir Shadanloo, massoud khodabandeh and Karim Haghi, flew to Paris on June 12, 2005 to seek refugee (!) status.