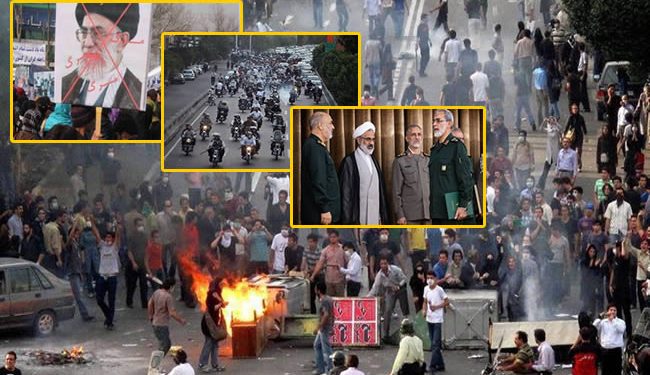 A “highly confidential” state document leaked to media warns that discontent is rising in Iran, with society in a “state of explosion.”

The document highlights the clerical establishment’s concerns over potential social unrest due to the deteriorating economy, which has been crushed by crippling U.S. sanctions and years of mismanagement.

The seven-page document allegedly comes from the Islamic Revolutionary Guards Corps (IRGC), Iran’s elite military force. It was leaked by Edalat-e Ali (Ali’s Justice), a hacktivist group that has previously disclosed secret documents and videos about the mistreatment of inmates in an Iranian prison.

The leaked document includes notes from a November 2021 task-force meeting chaired by Brigadier General Hossein Nejat, a senior IRGC commander and deputy head of Sarallah, a key IRGC base that oversees security in Tehran.

The meeting of the Working Group On the Prevention Of A Livelihood-Based Security Crisis was attended by representatives from the IRGC, the volunteer Basij militia, the intelligence bodies, and the Tehran Prosecutor’s Office, according to the leaked document.

The meeting notes quote an official from the IRGC’s intelligence wing, who is only referred to as “Mohammadi,” as saying that a survey conducted by the unit shows that public discontent in the country of around 84 million is threatening to boil over.

“Society is in a state of explosion,” Mohammadi said, citing Iran’s economic woes. He noted that “social discontent has risen by 300 percent in the past year.”

Mohammadi referred to soaring inflation, including hikes in the prices of food items, energy, and cars. He also noted the sharp declines in stock prices.

A group of Iranian shareholders who suffered losses in recent months held a protest outside parliament in Tehran on January 20, saying a decline in stock prices was due to government policies. Some of the protesters chanted slogan against Raisi, calling him “a liar.”

Stock market investors have held several similar protests in past months where they have accused government policies for their losses.

Raisi and his cabinet ministers have promised to deal with recent swings in stock prices, which have been caused in part by uncertainty over the fate of international negotiations aimed at reviving a 2015 nuclear deal between Tehran and world powers.

“Currently, 53 percent of society is skeptical about the claims of the establishment,” Mohammadi was quoted as saying in the leaked document.

The document also quotes an individual referred to as “Colonel Kaviani,” who is said to be an official from Iran’s domestic security and law enforcement agency. Kaviani is quoted as saying that protests held in Iran over the past Iranian year — which ends on March 21 — have increased by almost 50 percent and the number of protesters involved has nearly doubled.

Inflation last year was around 40 percent. But Kaviani was quoted as saying that the real inflation rate for basic food items in November 2021 was between 86 and 268 percent.

The purchase power of Iranians has shrunk significantly in recent months, with many complaining that they cannot afford basic goods.

Iranian teachers, pensioners, nurses, judiciary workers, and others have taken to the streets in the past few months to demand better pay and express frustration at economic conditions.

Iran’s Supreme Leader Ali Khamenei on January 30 admitted U.S. sanctions were not the only cause of Iran’s economic woes. He said government mismanagement had contributed, noting that “wrong decisions” were made by previous governments.

In 2015, Tehran agreed to curb its nuclear activities in exchange for the lifting of international sanctions. But in 2018, then-U.S. President Donald Trump withdrew Washington from the deal and reimposed sanctions that hit the Iranian economy and sunk the value of Iran’s national currency.

Ongoing attempts by Washington and Tehran to revive the deal have been marred by delays and disputes.