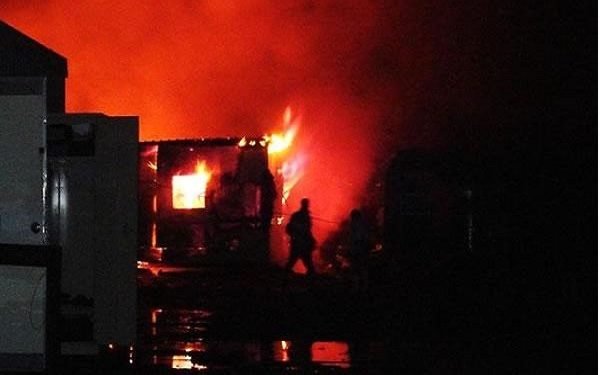 Despite the fact that for the second time last week Camp Liberty residents were officially informed that Government of Iraq has approved the sale of their property in Liberty, seven Iraqi merchants who had come to the camp to purchase the property were turned back on May 19, 2016. The merchants who had braved the difficult security condition in Iraq to come to Liberty were insulted by officers of the Governmental Committee tasked to suppress Camp Liberty residents and were forced to return after a long delay.

For the first time, in March, residents were informed that Government of Iraq has approved the sale of their property in Camp Liberty and they simply needed to provide the names of the merchants. So far, the residents have provided the Iraqi party, as well as the U.S. Embassy and UNAMI, five lists of Iraqi merchants interested in purchasing the residents’ property; however during this time span the Iraqi officers have prevented every single merchant — 24 in all — from entering the camp.

According to the joint plan of 5 September 2013 of the U.S. Embassy in Iraq and the United Nations that had been also agreed to by the Iraqi government, “The GOI” should have allowed “the residents to sell their property at any time”. However, residents have not been able to sell a single dollar of their property and 99 merchants who had referred to Camp Liberty were not allowed to get inside the camp.

Yesterday, the Iranian Resistance revealed that head henchman Mahmoud Alavi, Iranian regime’s Minister of Intelligence, in his visit to Iraq has instructed Faleh Fayyad, Iraq’s National Security Advisor and head of the Governmental Committee tasked to suppress Camp Liberty residents, that the Iranian regime is opposed to the sale of PMOI property in Camp Liberty. It has been concurred that ostensibly and in a positive gesture in front of UN eyes, Faleh Fayyad would allow a limited and inconsequential sale of some of the residents’ property such that it would not generate any meaningful income for the PMOI. By obstructing the sale of the property that is necessary for bankrolling the resettlement process, the Iraqi agents are disrupting this process. At the same time, this obstruction also paves the way for the systematic stealing and looting of the property.

In a resolution unanimously adopted by the House of representatives Foreign Relations Committee on May18, the U.S. Congress emphasized that “Whereas the residents left behind valuable personal property and assets at Camp Ashraf, under the explicit agreement that they would retain title to such property and assets” the resolution “calls on the Government of the United States to work with the Government of Iraq to make all reasonable efforts to facilitate the residents’ access and ability to sell their property and assets remaining at Camps Ashraf and  Libberty for the purpose of funding their costs of living and resettlement out of Iraq”.